If anyone saw us with our baby, we would look the picture of happiness; a young family of 3 enjoying all that life has to offer. But there’s a lot more to our story than meets the eye and that’s why I want to share it.

We were excited about starting a family

I’d just turned 30 when we decided to start trying for a baby. We’d been married a few years at that point, were happy with our jobs and had recently moved to the Middle East. So far, everything had gone to plan, and we (naively) expected the next part of our journey to follow suit.

I knew trying to conceive wasn’t always easy, but I was secretly optimistic that we’d be one of those lucky couples who would quickly fall pregnant. When it happened in our first month of trying, I was ecstatic. We told our families and started making a list of things we’d need to buy in preparation for our baby’s arrival – but 10 days later I started spotting, and within days it turned into a full bleed.

This marked the start of miscarriage number 1, and a very long and painful struggle with infertility and recurrent miscarriage.

This time we were cautious but still hopeful that things would turn out okay. Unfortunately, history repeated itself and a week after testing positive, I started bleeding.

We thought it might be third time lucky, but had another miscarriage – only this time, the bleeding began after a promising first scan which showed a fetal pole. This was even more heart-breaking.

By this point, we were extremely worried. Statistics show that only 1% of women have 3 or more miscarriages. How could we be so unlucky to fall within that 1%?

Our fertility struggles continued after that

I spent hours on fertility forums and the Tommy’s website looking for similar stories. I took various treatments and tried a multitude of different diets and alternative therapies. Naturally, everything took a huge toll on my mental health and although I had counselling and therapy, I was constantly avoiding pregnant friends and baby showers.

I had countless sleepless nights lost to anxiety, desperation and tears, and had multiple arguments with my husband about when we would stop trying to conceive and move forward with our lives.

I was dealing with all of this whilst working in a high-pressured job and navigating a new life abroad.

I felt as though I’d failed as a woman. News of other people’s pregnancies hit me like a ton of bricks.

My husband was ready to accept a future without children, but I could not. Wanting a child of my own had taken over every aspect of my life.

In August 2021, we embarked on another embryo transfer

This time, we used a genetically tested embryo. We were under the care of a wonderful fertility doctor who did lots of tests and left no stone unturned. We had 1 normal embryo. One shot.

I started spotting the day before I was scheduled to take a blood test to confirm whether I was pregnant or not. I was devastated. However, an early blood test confirmed that I was – just about.

Like with my previous pregnancies, my hCG levels were very low and slow to rise. From experience, I knew a positive test, although a huge milestone, was only the start of the journey for us. When I started bleeding a week after testing positive, I curled up in bed and cried, convinced it was all over. But we went for a scan, and miraculously there was a heartbeat flickering away on the screen.

Things seemed to be going well

I had a few more small bleeds before the 12-week mark, but my pregnancy seemed to be progressing well. Despite this, my anxiety was through the roof. I went to every scan expecting bad news.

I had never experienced anxiety like this before – it was debilitating. I just couldn’t see myself with a baby at the end of the pregnancy.

I felt a little more relaxed following our 20-week scan, where the sonographer confirmed that our baby was growing as expected and looked healthy. Maybe this was happening for us after all? We started (still very cautiously) taking bump pictures, buying baby clothes, and thinking of names.

Every time I looked in the mirror, or caught my reflection in a window, I admired my growing bump in disbelief. After years of heartache, I still couldn’t believe we were a few months away from welcoming a baby we’d waited so very long for.

One dark January morning, I woke up and felt a sudden gush of water. I was at my parents’ home in the UK, having travelled back at Christmas to see my family. My mum and I went to the hospital just to be on the safe side, and, after a few tests and an examination, the doctor reassured us that everything was okay.

But as soon as I got home, I felt another gush of water – this time, even bigger. We went back to the hospital to be checked out again, and another doctor confirmed the worst: Preterm Premature Rupture of Membranes (or PPROM). In other words, my waters had broken at 24 weeks and 5 days.

I couldn’t believe what was happening

I was admitted to hospital, immediately given steroids to help develop our baby’s lungs, and told that I was at high risk of going into preterm labour. We were also told that if our baby was to arrive now, they’d try everything possible to save her – but at 24 weeks, no one could guarantee she would be okay.

Thankfully, my labour didn’t start, and I was discharged from hospital after 5 days. However, following repeat and unexplained bleeding a few days later, I was readmitted to hospital indefinitely at 26 weeks.

The midwives at Wythenshawe were amazing

The days and weeks that followed were long and consumed by worry and anxiety. We were assigned to a team of wonderful midwives that look after women with a difficult fertility history. They’re called the Lotus team and help run a Rainbow Clinic at Wythenshawe Hospital in Manchester, which was set up after the success of the first Tommy’s Rainbow Clinic.

They were so compassionate and caring and quite literally carried us through the next few weeks – they gave us hope, lifted our spirits, and celebrated each weekly milestone with us.

We managed to get to 30 weeks and 5 days before baby Amelia was delivered. Her arrival into the world (much like everything else) was not the smoothest. She weighed a tiny 1.7kg and was whisked straight to NICU where she spent the next 6 weeks of her life.

Amelia is the biggest blessing of our lives

When I met our baby for the very first time, I felt like all of my dreams had come true all at once. After years of heartache, the one thing we wanted the most in the world was finally here. We’re so grateful to the Lotus team at Wythenshawe for supporting us through those final weeks and helping us meet our miracle baby. 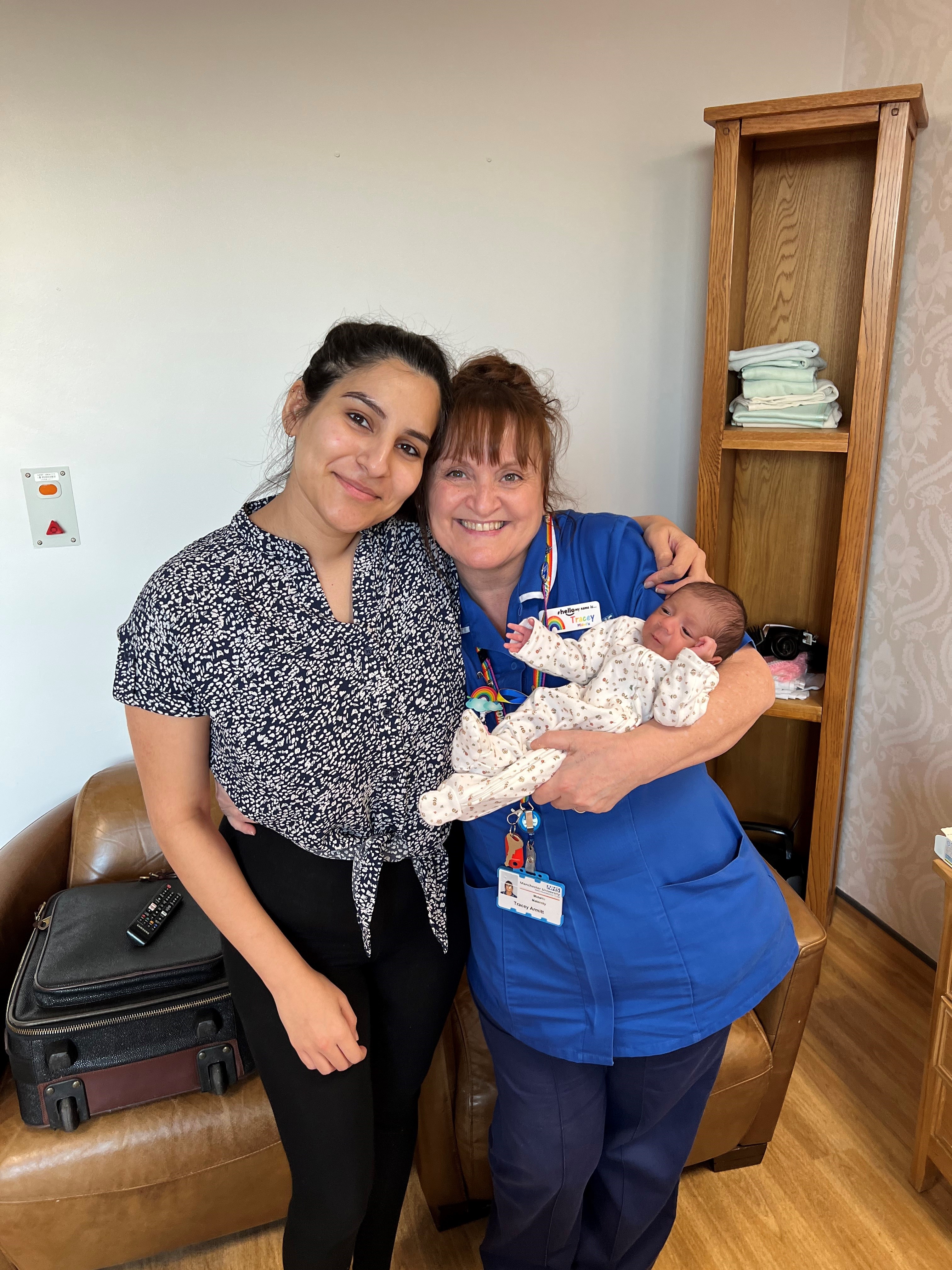 A photo of Sana with Lotus midwife Tracey, who is holding baby Amelia