My first 2 pregnancies were absolutely perfect, the births were fine and we had 2 healthy little boys in our life. Then I got pregnant again in August, a quarantine baby after a lovely holiday.

I bled on-and-off between 6 and 20 weeks and a scan showed a subchorionic haematoma but we were assured our baby was fine. Our 25-week midwife appointment raised no issues, then, at 26+2 weeks I was at home when my waters went. With my first baby they broke my waters for me and my second was a planned C-section so this was a new experience but I instantly understood what had happened and I panicked.

I called the midwife who told me to go to Peterborough Hospital where a swab confirmed fluid so, as I was under 28 weeks, an ambulance took me to Addenbrookes Hospital which had a larger neonatal intensive care unit.

I arrived at 1am on February 12 and the doctor explained it was highly likely contractions would start within 24 hours.

A NICU doctor then explained what would happen when baby was born. We were also given statistics which were really helpful, the survival rate was 80% if we could get to 28 weeks, basically the longer baby stayed in the womb the better her chances. They said 70% of women in my situation have contractions within 24 hours, 10% within 48 and with the remaining 20% contractions don’t start and they go home, I prayed to be in that 20% of lucky women.

I tried to sleep but they were waking me to check baby was still moving and if contractions had started. The next morning nothing had happened so they scanned to see how big baby was and if the head was down because, after 2 C-sections, a natural delivery would be safest. The head was down so we waited.

My waters had gone at 4pm the previous day so we were just desperately hoping to get beyond 4pm, that 24 hour point, but by midday I felt tightenings. I was in denial at first but they became stronger and really regular, I knew I was going into labour.

They monitored baby’s heart rate and I was given a second dose of steroids and then a magnesium drip as studies have proven it helps baby’s brain development. It felt horrible, like someone injecting heat into my veins. It takes around 15 minutes to go through the IV and I thought I would pass out.

When her heart rate started rising they decided an emergency C-section would be best so rushed me to theatre and she arrived at 6.24pm on February 13 weighing 2lb exactly.

I’d already asked if she would cry, I didn’t want to be listening for something that wasn’t coming, and they told me it depended how much energy she had.

I didn’t hear a cry but she was moving and making noises before they took her to NICU, ventilated her and got her stable. My husband went with her while I spent 2 hours in theatre being stitched up because they’d found a hole in my bladder which they think caused the premature rupture of the membrane.

It turned out to be E.coli which had developed from a UTI but I’d had no symptoms, no temperature, no pain. The infection must have spread to my placenta because they immediately said it didn’t look normal and, after testing, they found E.coli in it. Basically, my body had forced my baby out early to protect her from infection.

Phil couldn’t visit me on the recovery ward due to Covid but we could be together in NICU where visiting was 24 hours. Our little baby girl, who we named August, was on a course of antibiotics for E.coli which then became sepsis but she fought it off. She was only ventilated for 24 hours then on CPAP for 2 or 3 weeks then high flow for quite a while.

After I was discharged we made the 80-mile round trip to see August every day. Luckily, Phil’s mum was able to stay with us and look after the boys. At 5.5 weeks she was transferred to a less dependent unit in Peterborough then 5.5 weeks later, at 36 weeks, she finally came home.

She’s absolutely fine now and, although we will be under consultant care until she’s 3 to monitor her development, he is really happy with her and she smiles, she follows us with her eyes and recognises our voices.

I can talk about it all now without getting upset but I still suffer anxiety and PTSD about her birth which surfaced when I had a panic attack in the hospital and thought I was dying.

I spoke to a counsellor at Addenbrookes which really helped me understand anxiety because I’d never experienced it before and, while I sympathised, I didn't really understand that it wasn’t just worrying, it was a physical response.

The anxiety is more health related now and not about August because I can see she’s thriving, it’s about me. In labour I felt sure I’d die, I even told my husband to tell the boys that I loved them. I think that I had to keep it together at that moment in time and the panic attack was a delayed response.

It was so physical that I was sure I must have a blood clot or sepsis and would never see my children again. I’m currently on the waiting list for CBT to help my brain process what happened and hopefully get back to normal.

Now we are home, settled into a routine and it’s like she’s always been here. Both boys adore her and have bonded so well with their little sister.

It really helped me to hear stories of hope. I remember a noticeboard in NICU with photos of babies who had been in there and were now at home and, although it was hard to believe that would ever happen for us, it did give me hope.

I really want my story to do the same for someone else, to say that I understand how hard it is but you will get through it, there is always hope. 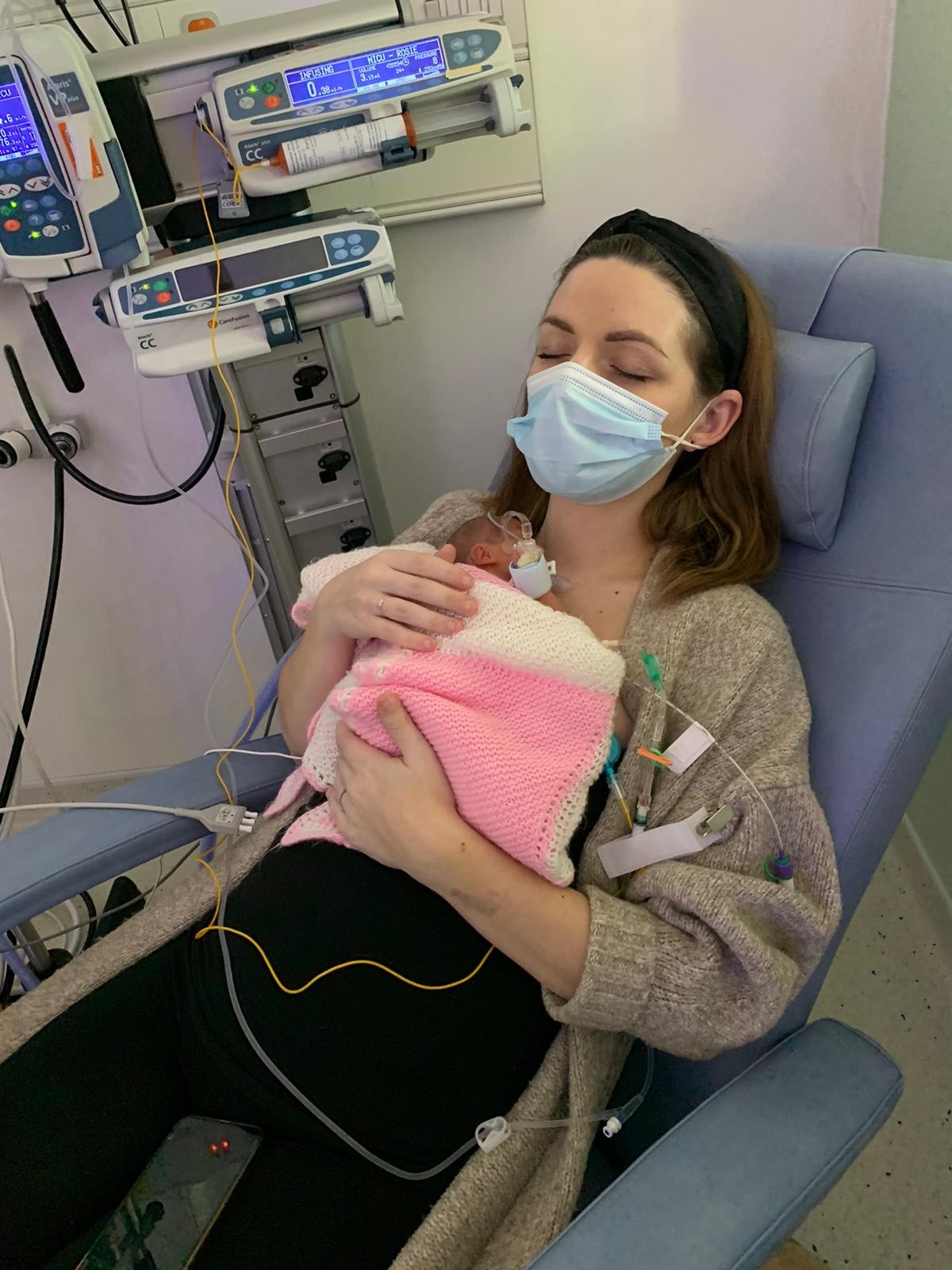