As the days, weeks and months passed our love for our daughter grew stronger and stronger.

Concerns about our baby’s growth

I was 36 weeks when the midwife booked me in for some extra growth scans. She was concerned that our baby was smaller than expected. At our extra growth scan, the sonographer then midwives examined the baby and said there were no concerns, but they would get the results checked by the head consultant. After waiting a couple hours for the consultant, he sent us home and assured that us everything was okay and there was nothing to worry about. We were booked in for a scan the following week.

In the days that followed everything seemed normal, Kallipateira was kicking and moving with her same daily routine. We protected her with every bit of love we had.

I attended the follow-up scan a week later. I knew something was wrong almost straight away. With less than 2 weeks to go until the due date, we were told the most devastating news. Our baby had no heartbeat. Our daughter had died. I was given medication to stop my pregnancy hormones and was sent home to prepare to give birth.

Ben and I walked home from the hospital together in tears. We were shaking and felt completely destroyed. At that moment, a part of us died. We had planned the rest of our life, hopes and dreams for our daughter. Within hours this reality had been torn from us.

On Friday 26 October, my waters broke in the early hours and we made our way back to the hospital. After 15 hours of labour, Kallipateira Rodothea Moorhouse was born. She weighed 7lb 3oz and had a head full of dark black hair- even the midwife was amazed by how much hair she had.

Our hearts had been ripped apart but when we got to see her, we were so proud. We had created such a beautiful young lady. Our baby. Our daughter. In the hours ahead, we held Kallipateira with every ounce of love we had for her and more. We slept with her during the night and we could not keep our eyes off her.

The time came when we had to kiss Kallipateira and say goodbye. We promised her we would make her proud by helping others and hopefully giving her a brother or sister.  She is and always will be the love of our lives and she will always be with us in our hearts and we will continue her legacy in all we do. 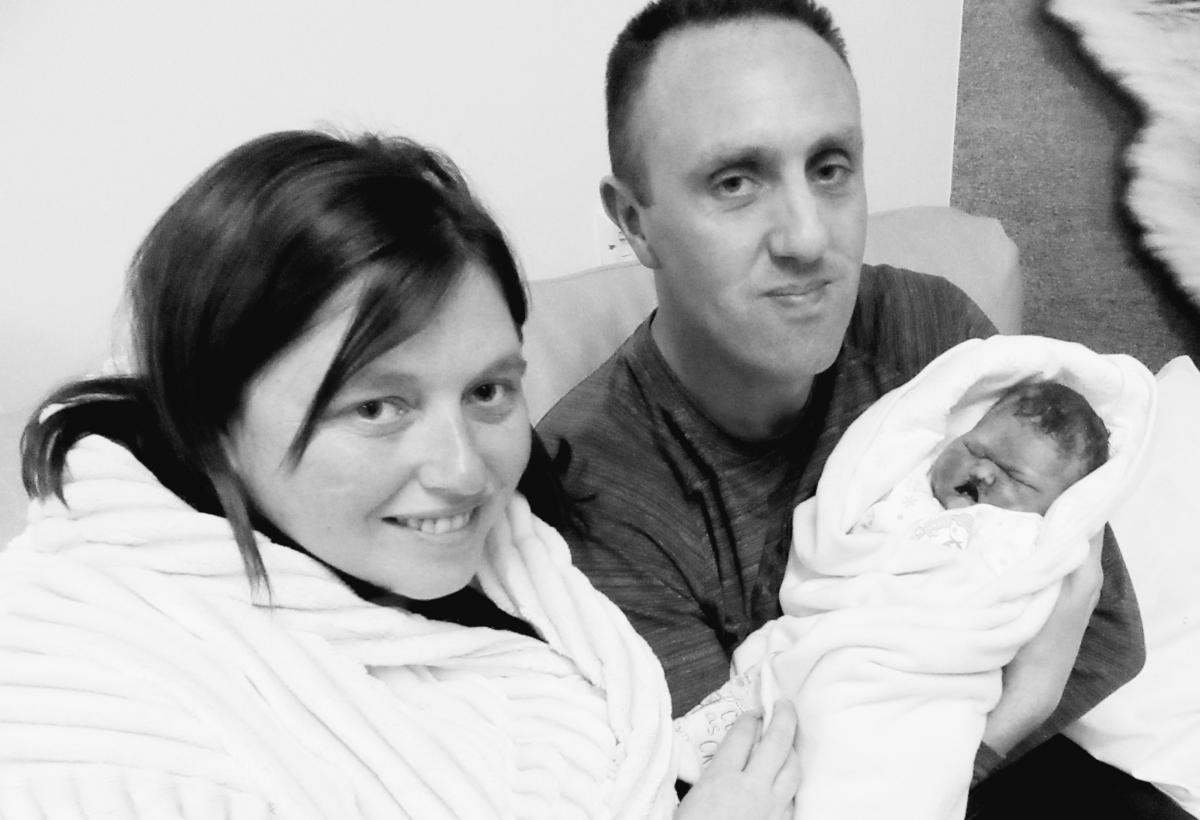 In January 2019, we had a meeting with the consultant at our local hospital to find out more about what had happened. We were desperate to know why our daughter had died. At the meeting, we found out that I had undiagnosed gestational diabetes during the pregnancy. We also learnt that my placenta had been very small which left Kallipateira fighting for her life.

I left the meeting feeling like it was all my fault. It was particularly difficult when they asked in depth questions about her movement. Deep down, I worried I could have done something to prevent the loss.

We became pregnant with a sibling for Kallipateira soon after that meeting but experienced an early miscarriage at 9 weeks. We’d reached a point where we were losing hope. We were both in a dark place and worried we’d never bring a live baby home. It was like a whole new wave of grief.

When we found out about the work of Professor Alex Heazell at Tommy’s Rainbow Clinic at St Mary’s Hospital in Manchester, we contacted him straight away. We were immediately put at ease by his calm and gentle manner.

At our first appointment at the Rainbow Clinic, Prof Heazell took his time to explain more about the cause of Kallipateira’s death. He explained that, after close analysis of our placental tissue, it was clear that I have a rare condition called Chronic Histiocytic Intervillositis (CHI), a rare condition that causes placental failure. We were very shocked that this hadn’t been picked up by our local hospital as it can cause recurrent late pregnancy loss.

He made it very clear that what happened to Kallipateira was preventable but was not my fault. I had nothing to feel guilty about. I really needed to hear that.

Prof Heazell explained that that his research team at Tommy’s Manchester Research Centre have conducted world-leading research into CHI and have recently discovered a pioneering treatment. He promised us that, if we were to become pregnant again, he would personally care for us. We finally felt some hope that we’d be able to give Kallipateira a sibling that would come home with us.

I became pregnant for the third time at the end of 2019. We felt joy and terror in equal measure. We contacted Prof Heazell straight away. He cared for us throughout the pregnancy at The Rainbow Clinic. We were also referred to the Tommy’s Velocity Clinic where we received outstanding care for my gestational diabetes.

During our pregnancy, we visited the Tommy’s Research Centre regularly for detailed scans and appointments. Prof Heazell asked us if we’d feel comfortable participating in research trials to help the team learn even more about my rare condition. We said yes without any hesitation. We felt proud that we could give something back.

One of the trials we participated in involved having an MRI scan. The Tommy’s researchers wanted to find out more about how useful this type of scanning is when assessing placental function.

Knowing we were helping to save babies’ lives in the future felt wonderful and I would encourage any pregnant women out there to participate in clinical trials if they can.

Giving birth to our son

Our son Apollon Alexandros Moorhouse was born slightly early at 35 weeks at St Mary’s Hospital. I had an elective c-section scheduled in but, after 16 minutes’ of labour, he arrived. There was a 10 second interval before he cried but when we heard his little voice, we were overjoyed. We couldn’t believe he had been born safe and well.

The Tommy’s team are incredible. Everyone we encountered treated us with such kindness and respect. I felt safe under Prof Heazell’s outstanding care. We truly believe our rainbow baby wouldn’t be here today if we hadn’t had access to Tommy’s.

We talk about his sister often and still feel sad that her death could have been prevented. We are passionate about breaking the silence around baby loss and raising money so more life-saving research can take place. We want people to know that there is help out there – you don’t have to stay at a hospital you don’t feel comfortable with. 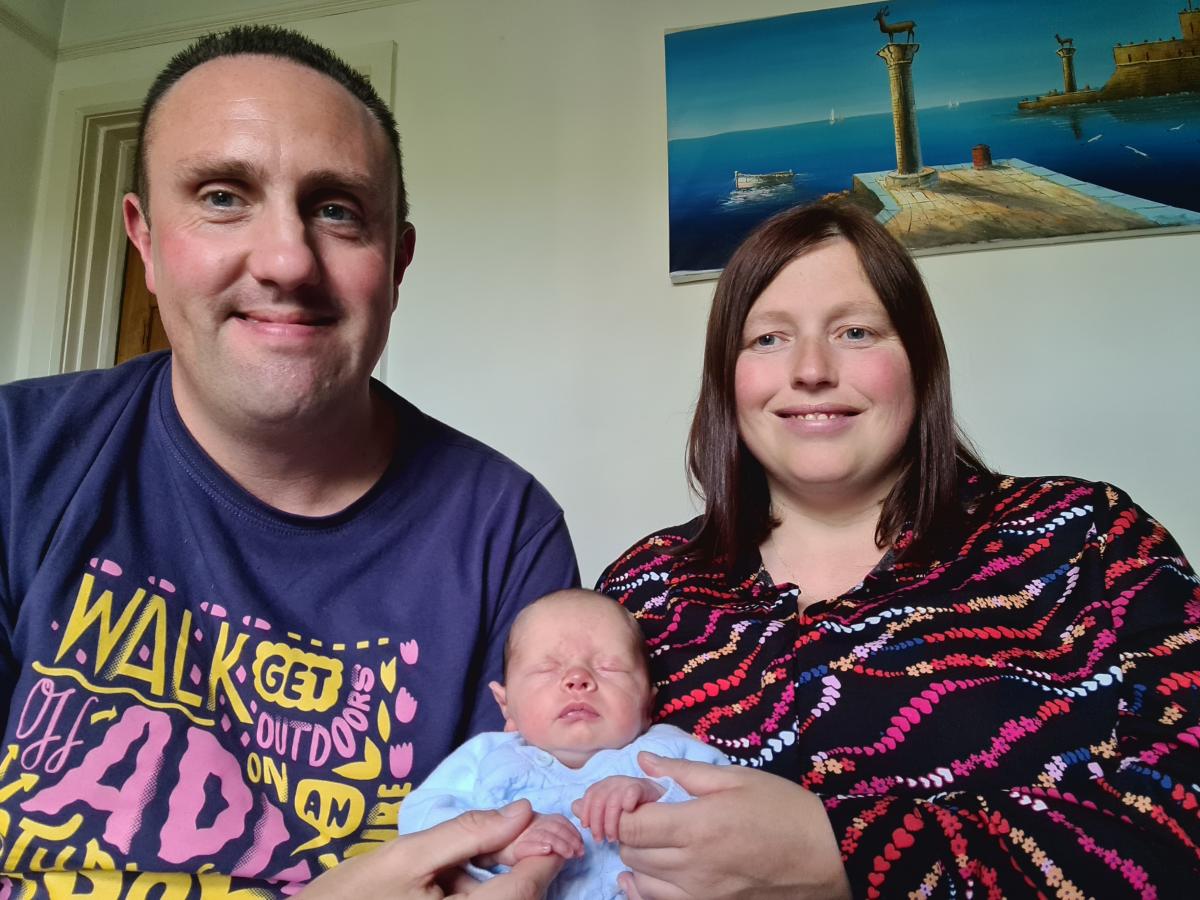 On 14 August 2021, Ben along with his support team of Gaynor and Jason Croft will attempt to walk around the full Greek island of Rhodes – a total of 150 miles nonstop and with no sleep at the height of summer. Ben is looking to achieve this in just 48 hours or less in honour of his daughter Kallipateira. All funds raised are for Professor Heazell and his team to help save babies' lives.

Ben has set himself a target of £20,000 for the extreme challenge walk and will create history in Rhodes if he completes this.

You can support Ben by heading to his JustGiving page.