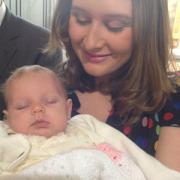 My first miscarriage was the worst thing which has ever happened to me - until the second came along four months later.

The only explanation I've had so far is 'bad luck'. The medical profession has, as yet, no more sophisticated explanation for why I had a healthy first pregnancy, but both pregnancies which should have resulted in a much-wanted second child didn't make it.

The first miscarriage was a 'missed miscarriage', where the baby stops growing, but your body still thinks it's pregnant. I had to have him or her removed through a process known as an EPRC, under general anaesthetic.

When I think of the innocence and insouciance with which we waited for the 12-week scan we assumed would show our healthy second child, I desperately want to still be that person.

As advised, we took three months off before trying again. This time, I was pregnant for less than six weeks before I saw the blood. Hoping that it was just some spotting, I went into my work as a financial reporter. I went into hair and makeup and talked about Barclays bank's full-year results live on air before realising that I was being completely insane and had to get to hospital.

Now, I am left wondering when to try again and expose myself to the entire cycle of joy, hope, fear, grief and anger all over again. I can already feel myself becoming more anxious and strained as a mother - which is only natural when I feel as though I have failed twice to look after my child at its most vulnerable. At this moment, it feels as though I will have a permanent little grey cloud following me around for the rest of my life. I don't even want to tell my friends, many of whom are at the stage where they are just starting to try to get pregnant, as I feel like a hex, an omen of bad luck further along the way.

To get any further investigation through the NHS, I have to have a third miscarriage, and brace myself for the emotional and physical devastation which will follow.

Perhaps I should accept this.

After all, I have had a lot of good luck: being born to parents who loved each other and their children; meeting someone who I wanted to marry who wanted to marry me, at an age where it seemed we had forever to start a family; having a lovely, healthy two-year-old who makes me laugh even more than her father does. Maybe I should just accept that a second healthy pregnancy would be a surfeit of luck, a brimming over of my cup of happiness.

Yet there is something about this acceptance and repetition of the "bad luck" explanation which seems wrong to me. It is, I think, part of the near-mysticism with which we infuse the process of conception, pregnancy and birth, when sometimes, rather than talk of miracles and wonder, we need some actual scientific facts.

I want a better answer to my questions

What if there is something I can do next time to tip the odds in my baby's favour? Because right now, if someone with a medical qualification told me I had to spend my entire pregnancy hopping on one foot while only eating broccoli and wholemeal bread, I'd do it if I thought it would raise my chances of giving birth to another healthy baby.

I want clever doctors, scientists and researchers to give me some answers. If we can send people to Mars, surely we can work out a better answer than 'bad luck' to why so many pregnancies end up this way.