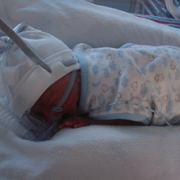 He weighed just 1lb 10 and we were warned that he only had a 50% chance of survival. Even if he did survive we faced a long, hard battle ahead. My dreams of pregnancy, labour and being a mom were shattered and I honestly believed that he wouldn’t survive. However after he was born Mason gave a small squeak and showed us just how much of a fighter he was.

The first time I properly saw Mason was when we were taken down onto the neonatal intensive care unit. In the middle of tubes, wires, machines and nurses was a tiny baby who they were telling me was mine. Mason's skin was see-through and my first thought was that he didn’t look like a baby, more like an alien. His legs were all bruised and swollen, which I was told was due to his birth. I remember the feeling of being overwhelmed, just crying and feeling so helpless. 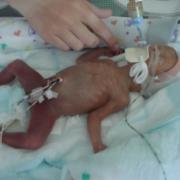 Mason spent 13 weeks in hospital and we experienced the many ups and downs that premature babies face. He needed medication to close a duct in his heart and he also needed four blood transfusions. Mason had many battles with the ventilator and c-pap machine and just when we thought we were getting somewhere he would take a large step backwards and end up back on ventilation. I remember the doctor describing Mason as ‘stuck’ and that they were concerned as to whether they would get him off ventilation. Luckily Mason proved them wrong and showed his determination by coming off the ventilator, c-pap and oxygen in quick succession but only when he was ready not when he was pushed.

One thing that I found difficult is that I didn’t feel like a proper mom. I couldn’t just pick my baby up or change his nappy. But this never stopped me from bonding with Mason, I would sit by his incubator stroking his head or letting his tiny hand hold my finger and tell him stories or talk to him about the things we were going to do. Mason also developed ROP and whilst in hospital had to undergo laser eye surgery to save his eyesight. 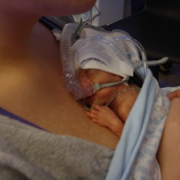 Mason had a grade 4 bleed to the brain and we were warned that there was a high possibility that he would never walk or talk. Obviously this devastated us but once the news had sunk in we vowed that we would get behind Mason and support him in achieving his milestones and loving him unconditionally. I remember looking at Mason in his incubator and thinking that as a family we would get through this and that we would do everything in our power to help him prove the doctors wrong.

Mason was finally allowed home at 13 weeks old on his dad’s 30th birthday – the best birthday present he could have wished for. It was an amazing day and I don’t think I stopped smiling all day. I finally felt like we were complete. A small part of me was anxious as we were leaving the safety net of the hospital and all the monitors and nurses but I think my happiness overcome this! I remember sitting at home just staring at him and having to pinch myself to prove that he was really home and I wasn’t dreaming!

Mason has made us so proud 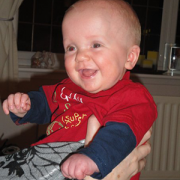 Mason is now four years old. He has made us proud on so many occasions. He has overcome so much and done it with a massive smile on his face. One of my proudest moments was when he ran the mini marathon (1.6 mile) in 15 minutes – not bad for a boy who we had been warned would never walk or talk. Mason was sponsored to run the marathon and raised £220 to “help the poorly babies like me”. He made me even prouder by then going onto say that when he is older he would like to run the London marathon with his dad and help even more poorly babies.

Another proud moment was when Mason jumped into the swimming pool, he had been practising for weeks and finally he mastered it – no easy task for a child who finds it difficult to jump on the spot.

Our most recent proud moment was when Mason won the Tommy’s and Build-A-Bear Workshop®Champion Children award. We were so proud and overwhelmed that our little boy had been recognised for the strength and determination he has shown in his four years of life.

Mason has shown great resilience and I truly believe this is something which will stay with him for life. He meets challenges head on and is very determined, it may take him a little longer sometimes but he gets there and he does it with a massive smile on his face. 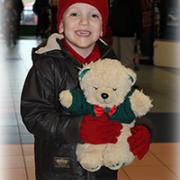 When I was told Mason had hemiplegia cerebral palsy I made a decision to not treat him differently because of his disability and so I have challenged Mason to be as independent as possible and I honestly feel that this has helped Mason to be where he is today and that if I hadn’t have taken this attitude his disability may have been more debilitating than it is.

Having a premature baby was one of the hardest things we have ever been though. My advice to any new parent of a premature baby is to believe and never give up hope. Mason has achieved so much and proved so many people wrong all because we believed him and taught him to believe in himself.

I would also recommend that anyone going through a similar situation should write a daily diary whilst your baby is in hospital. I did this and it helped me to get through each day. During some of the tougher times I could look back and see what we had already achieved and overcome. I love reading this diary and can’t wait to share it with Mason when he is older.