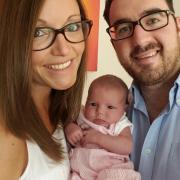 As a Tommy’s midwife I’m really aware of fetal movement and constantly telling pregnant women that, if they have the slightest concern, they must come and see us. Yet, when it came to my own baby, I didn’t take my own advice. I delayed making that call because I didn’t want to make a fuss.

I’d had a really good pregnancy but, as a midwife, I guess you’re more informed and, I guess, just more aware of the things that can go wrong so I was nervous going in for that 12 week scan. It was amazing to see our baby and made it all feel more real, more exciting.

The 20 week scan revealed we were having a little girl and we were delighted. It also showed I had a low-lying placenta but I was reassured that 9 times out of 10, it will move, which it did.

I was 29 weeks when I had my first episode of reduced fetal movement. I usually felt our little one bouncing around first thing in the morning and, on this particular day, she’d been a bit quiet. By the time I got to work I mentioned to a colleague that she’d not been moving much and was sent to a room to have a drink, lay on my side and do all those things you do to encourage movement. I was prodding my bump, urging her to wiggle and when I finally felt her I was hugely relieved.

Still, there’d been a reduction in her kicks so, that evening, I rang the hospital to tell them I’d done everything you should to provoke movement and felt nothing, so they told me to come in.

They immediately listened for a heartbeat, which was fine and I felt reassured. Then they kept me in for a full ante-natal check and to trace her movement. Everything looked good, but they booked me in for an ultrasound 48 hours later.

That scan showed my placenta had moved to where it should be, the blood flow through the placenta was really good and our baby’s growth was absolutely fine and I left feeling I could relax a little.

Everything was going well, my bump was getting bigger and, although she wasn’t much of a wriggler, I could feel our baby moving.

At 38 weeks I went on maternity leave and spent the weekend tidying the house, getting ready for our new arrival. On the Monday baby had gone really quiet again and I realised I’d felt very little movement since the middle of the night. I was getting quite worried but I was home alone, my husband at work, and I was feeling so scared I wanted to wait for him to get home so he could come to the hospital with me.

John came home and I explained that, although I’d felt flutters, she wasn’t moving as normal. He wanted to ring the hospital and I insisted, as I know a lot of pregnant ladies do, that I didn’t want to bother the hospital for nothing.

John was a brilliant voice of reason, asking me what I, as a midwife, would advise a woman in my situation.

So we went in at around 11pm and the midwives didn’t hesitate, first monitoring her heartbeat then they measured me and found she was a little small. It was a shock and I started to worry. Was the placenta failing? Was she getting enough oxygen?

The hospital policy was that, after two episodes of reduced fetal movement, they’d induce if it was safe to do so. I wasn’t expecting it but I did feel relieved.

They started the process at 8pm on Tuesday, by 1am I felt niggling pain and by the morning I was 1cm dilated and, when they discovered baby’s heart rate wasn’t reactive, they took me to the labour ward where they broke my waters.

Four hours later and Sophie was here. She was absolutely perfect and I was flooded with relief.

When I was pregnant, I think I relinquished that ability to be a midwife because I wasn’t thinking as a midwife, I was thinking as a mum. Even though you understand all the technicalities, you have a whole different perspective when it’s happening to you. I used to go to work and ask colleagues questions that I already knew the answer to, just for that extra reassurance.

I put my complete trust in the people caring for me and they all, from midwives to doctors, did an amazing job for which I’ll always be grateful.

Fetal movement is so important, it’s a baby’s way of communicating with us and only a mother can really feel that difference. I’d urge any woman that, if you’ve any concerns, you mustn’t hesitate. Don’t worry about making a nuisance of yourself, we’d rather you did. Looking after you, and your baby, is our job.