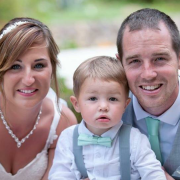 My miscarriage journey started when I was only 18 years old. I was with my long term boyfriend and I had no idea I was pregnant. Before I went to get in the bath something that looked like a small kidney dropped out of me, I just stared at it. I've never seen anything like it before. I said to my boyfriend "well I don't think that's normal." I didn't know what to do so I put it down the toilet and carried on with my night.

I later spoke to my mum, nan and auntie about it and they said it sounded like a miscarriage. I was so shocked that I just cried. How could that happen to me? But they said I'm young so when were ready, I'll be able to have another. Even though I didn't know I was pregnant, it hurt to think about losing a baby.

I went to the doctor and he laughed at me and told me so many ladies bring him their clots in and ask if its a baby and most of the time its just a normal pregnancy clot. He wasn't taking me seriously. I knew in my gut it was a miscarriage so I requested blood tests and it soon came back and confirmed what I had thought. I switched to a female doctor who has continued to help me throughout my miscarriage journey.

I went on to have another 3 miscarriages before 'Pip.' We went for a scan, heartbeat was seen but not so long after I was told the dreaded words 'sorry Kadee, I cannot find a heartbeat.' I was distraught and totally devastated. Luke and my mum was also very upset. I was taken on to the ward and told that I'd had a missed miscarriage. Pip had stopped growing and the tiny heart had stopped beating. I was given my options and opted for a medical assisted miscarriage, they started me off and within no time I was staring at Pip in a bedpan.

After this experience I felt suicidal, I didn't how could I go on. I was crying all the time and could barely make it out of bed.

I felt alone, I had no one to understand and talk to. I couldn't control what was happening and felt useless and worthless as a woman.

I started searching online for tests I could have and my excellent doctor referred me to my local hospital to discuss things further. I was told I could have basic tests there but that I would need to be referred to a specialist hospital for further testing. This gave me the hope I needed to carry on. They said due to being so young London St Mary's may not accept me but the referral was put forward. I sought advice online on London St Mary's and came across a forum for recurrent miscarriage, the ladies gave me the support that no one else could. They had been in my shoes and could understand how I feel.

My local hospital later removed a cyst from my ovary and I soon had my results back from the London St Mary's tests. Everything is normal. There's no reason why I cannot carry a baby. I questioned my relationship with Luke, maybe we were just not compatible. I tried my best to push Luke away. I didn't want him to stay in a relationship with me when I may not ever be able to provide him with a baby and I was mostly crying and miserable but he supported me nonetheless.

I didn't feel I was taken seriously by medical staff because I was so young at the time and was frequently told 'time is on my side, I can always have another' but how many more heartbreaks would we need to have before we finally got our baby? I didn't want another, I wanted the baby I was carrying! How could they be so insensitive. We endured a loss of 8 babies, Bean being our furthest at what we thought was over 10 weeks but stopped growing at 8 weeks.

I decided things had to change, I changed jobs to one that was less stressful and less physical. We purchased our first home together and I changed my diet, we decided to stop trying to get pregnant and let nature take its course.

My 9th pregnancy resulted in a beautiful baby boy. It wasn't an easy pregnancy, I had all the bad pregnancy symptoms you could think of and so many scares such as his stomach not growing in-line with the rest of his body but he was born 09/01/2014 weighing a healthy 7lbs 4oz and my broken heart was healed. After years of battling for a baby, here he was in my arms. It felt surreal and like a dream. After all the suffering, he was my light at the end of the tunnel.

Riley is now two and absolutely amazing, so we have moved in to our bigger home with expectations of filling it with lots of happy children and making lots of wonderful memories. We decided to start trying to conceive again in January this year and I fell pregnant the same month. We went for our first scan and there was the tiny beating heart at 6 weeks. The sonographer said there was a small bleed but that she wasn't worried. We told close family and friends and everyone was as excited as we were.

We started planning out the house and which would be the babies room and what we have saved and would need to buy. Now we had seen the heartbeat we dared to dream.

Three weeks passed and I went back for my 9 week scan. I felt extremely nervous, this was make or break for us.

As soon as she started to scan my small bump, I knew. I began frantically searching for the beating heart. It should be there, we have already seen it. I knew when she looked at me what she was going to say 'sorry Kadee, I cannot find a heartbeat.' The words we have heard so many times before but never got used to. I instantly started to sob into my hands. My husband lovingly grabbed my side and I dare not even look at him. I didn't want to see the pain in his eyes, he has lost his baby too.

The nurse led us back to the ward to go over our options, she was so kind and compassionate. I could tell it had affected her. I had the D&C with my last miscarriage and my body didn't react well with the medication, so I went for the medical assisted option. I couldn't believe this was happening again, especially after we have had Riley and he is so perfect.

We had a rescan a few days later and then we started the treatment. It took four rounds of the tablets before I finally passed the placenta and the baby and after two days in hospital I could finally go home. We had always sent the babies off before to be checked for abnormalities but we decided to bring the 9 week baby home with us. We purchased a willow tree and we have put the baby underneath it. It is now our memorial tree for all our babies I carried but who we never got to meet.

We told our family and friends and everyone is as equally devastated as we are and we have been amazed at the support we have had. My friend came round to bring me flowers, such a small gesture but it meant so much. I understand it's hard for people to know what to say but just being there is enough.

We have decided to take a break from trying and concentrate on Riley and each other. In the future we will look at doing more tests but for now were happy with the way things are.

Riley is our happy ending and he completes us, we know how fortunate we are to be blessed with a child.