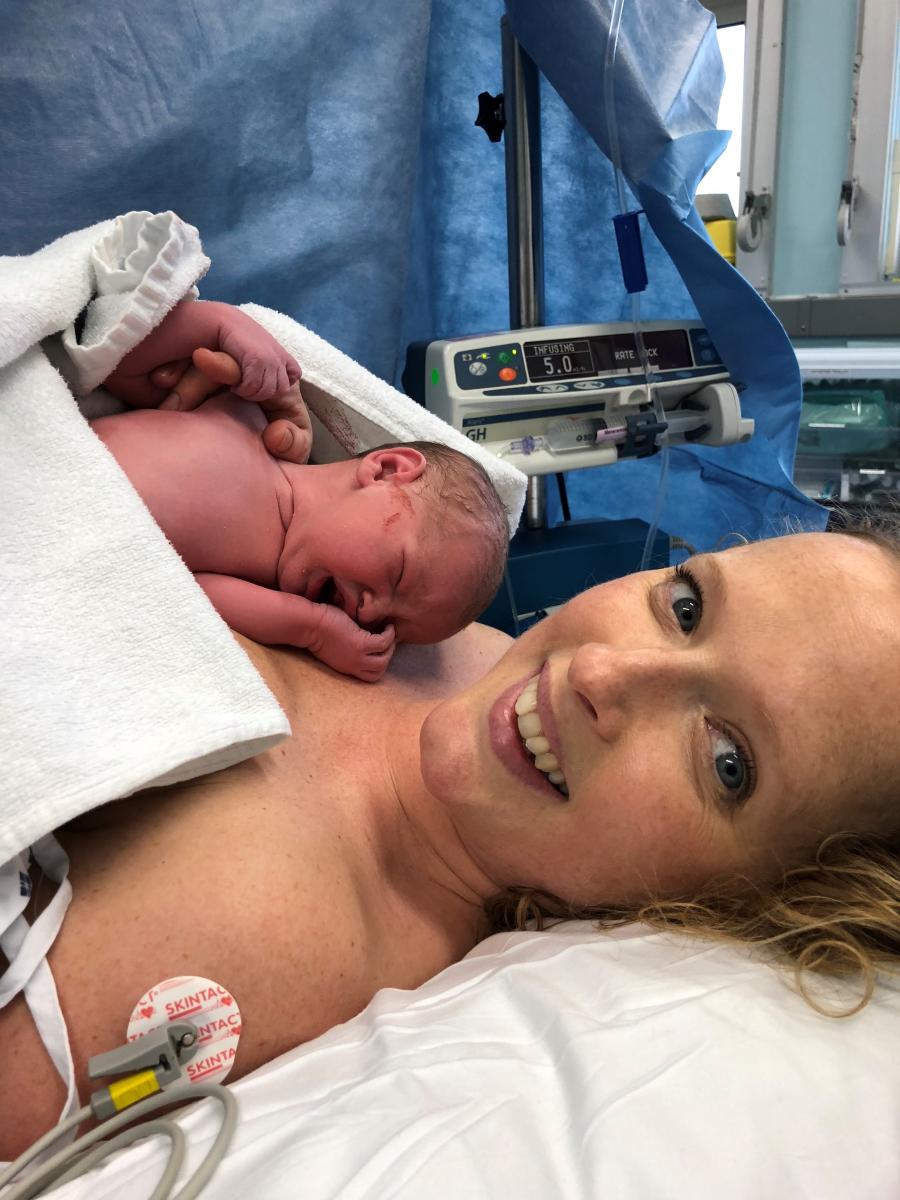 Here at Tommy's we are fortunate to have a number of supporters who go above and beyond to help us continue our lifesaving research. One of these such individuals is Fran.

We sat down with Fran and talked through her journey of six losses before meeting her rainbow baby.

How did you come across Tommy's?

I work for an events organiser and Tommy’s take up places with our running events every year. The Chief Executive of Tommy’s, Jane, kindly invited myself, my husband (who is also my boss!) and a colleague along to a launch event at the Houses of Parliament to mark the opening of the new miscarriage research centres. It was very apt as Tom and I had been through several miscarriages by that point with no children – so was a very poignant invitation for us.

We had just had the best year of our lives – we got married, had a fantastic honeymoon, travelled and generally had loads of fun. Then the following year in 2013, we decided we would start trying for a family.

As many couples do, we thought we had time on our side and getting pregnant would be without complication. Something, however, niggled in the back of my mind that it might not be as easy as we hoped as I had experienced an early miscarriage in my early 20’s.

It wasn’t long before we got pregnant. I was working for a different company at the time and remember so vividly the day I went to the loo to find spotting. My heart sank, as I knew from previously that this probably wasn’t a good sign so early on. Sadly, my boss wasn’t very understanding when it came to going to the doctors a few times, demanding to know how many more appointments I would be going to. I was loathed to tell her what was really going on as it was so personal and eventually her attitude coupled with the stress of the pregnancy drove me to walk out on the job. So, I lost a job and a baby at 8 weeks.

We moved on from this one and put it behind us – “next time will be different”. That was spring 2013, and by November I was pregnant again. But it wasn’t to be and we only got to about 5 weeks before I started bleeding and lost the pregnancy.

By this point, my gut was telling me that something wasn’t right, considering the miscarriage I had experienced when I was young. I went to my GP and asked him to refer me for further testing – strictly, I had only experienced two miscarriages with my husband when referrals are routinely made after three.  However, I convinced him that including the miscarriage I had when I was younger, this made a total of three miscarriages. He made the referral to our local obstetrician and specialist, Tony Kelly (who years later would deliver our rainbow baby!)

I went through all of the routine tests for recurrent miscarriage and nothing showed up apart from the fact that I had thyroid antibodies (Hashimotos) and that while this could have been an influencing factor, the only treatment available was to steady my TSH levels with thyroxine. Which, I had already been doing after the first loss.

So we tried again, and number three happened quite easily. We thought that the third must be OK and that there was no way it could go wrong again. It wasn’t long though, before spotting started and we made another trip to the EPU at the Royal Sussex County. This is where I must stress how utterly depressing, heart breaking and distressing recurrent miscarriage is. Regular visits to EPU clinics, hopeful scans that end with ‘I’m sorry, I can’t find a heart beat’, and the sheer darkness of knowing that somehow, you now need to have that baby removed or wait to miscarry. All coupled with sitting next to other women who are either ecstatic that their scan went well or are devastated that it didn’t … is all an experience I wouldn’t wish on my worst enemy. It is testament to so many couples that survive recurrent miscarriage and who become stronger, more resilient and more together.

I chose the ‘wait to miscarry’ option for this one. I waited two weeks. Two weeks, carrying a dead baby inside me. Two weeks, I didn’t want to see anyone or felt so very odd and alone walking around and people not knowing. Then when it happened, it was so painful. We were so worried at one point that we went to the hospital to get checked out. Turns out it was just ending but a week or so later at a follow up scan there was retained products and I ended up needing an ERPC anyway. I vowed that if we went through it again, we would always get an EPRC to get life back on track as quickly as possible. That one really left its mark on me, and I subsequently experienced stress related muscles twitches, pins and needles and anxiety for many months.

I started to do a lot of reading and research and came across the highly regarded work of Professor Regan at St Mary’s Hospital in London. Tony Kelly happily referred me and at my first appointment they scanned me and discovered a septum or heart shaped womb. Removing this, they said, would increase my chances of sustaining a pregnancy as the septum can restrict the blood flow to the baby. The surgery left me quite uncomfortable and was a pretty horrible experience to add to the miscarriages but recovery was actually OK. On the plus side, we thought it would answer all of our problems but sadly it didn’t. The next pregnancy ended early again, following yet another heart breaking scan where we had seen a heartbeat two weeks previously, there was nothing. The amazing Mr Quinn at St Mary’s booked me in for an ERPC the very next morning. That was a very dark day – my husband had to go to his Grandad’s funeral that morning in London, while I went in to have our baby removed.

We had genetic tests run on one of our pregnancies, and everything came back normal. The doctors reassured us that this meant genetics was unlikely to be the cause.

Pregnancy number four – we found out whilst on holiday in Italy. I started spotting at the airport on the way home and lost it a few weeks later. I blamed myself for drinking and sitting in the sun. I now know that blaming yourself is pointless and also ridiculous as it is never your fault.

However, during that pregnancy, St Mary’s re-ran all of the blood tests that they had done when I first went to them. The difference this time, was that I was actually pregnant. Results showed I had sticky blood when pregnant but not otherwise. They prescribed aspirin for the next time we would become pregnant.

Pregnancy number five and we went to St Mary’s at around 6 weeks for the early scan. They could see the pregnancy and so we started on the aspirin. Surely this time! Once again though, it didn’t make it and I couldn’t help but wonder if we had started the aspirin at the time of a positive test and not at 6 weeks, would things have turned out differently?

We were really starting to lose hope by this point but I had started to read up on Natural Killer Cells and the theory that the body fights off the pregnancy as a foreign object. I had Hashimotos already so if my immune system could kill my thyroid gland, then why not a baby? Professor Quenby’s work came up in my research and I discussed this option when next at St Mary’s. While Professor Regan’s clinic did not currently advocate tests or treatment for NK Cells as the theory hadn’t been fully proven by medical trials, our consultant said that he really didn’t have any more tests he could offer and that we had nothing to lose by going to see Quenby. So I booked an appointment and made the trip for the womb scratch test. (It was important to me that I had this more reliable test and not the simple blood test as offered by many other private fertility doctors.)

My results came back that I had high NK Cells at a treatable level. Quenby advised prednisolone, progesterone and Clexane.

Pregnancy number six - We went for our 5 / 6 week scan at St Mary’s and started all of the treatments, including aspirin and the NK Cells programme following a viable scan. We thought that this must be it! Once more though, our dreams were dashed and I miscarried again. This time however, genetic tests on the foetus showed that the baby had Turner Syndrome – a common cause of miscarriage that we were not predisposed to. Regan told us to “go and try again”. Easier said than done and after much talking, we knew we couldn’t face it mentally or physically again.

We signed up to a surrogacy agency having discussed our options at length. While waiting for a ‘match’ we took a much-needed break in Barcelona in April 2017. And we got pregnant by accident! Such a cliché but true. With some fear as well as joy, I decided to throw the book at this one and took the aspirin and the NK Cells treatment right from the positive test. What did we have to lose?

11 months later and I’m sitting here writing this while our 9 week-old baby girl is fast asleep in her moses basket. While the pregnancy was certainly not joyous and we worried the entire time, she’s here, she’s fabulous and all of the pain and tears have been worth it. I can’t say a big enough thank you to Professor Regan, Professor Quenby, Mr Quinn and Tony Kelly and everyone who supported us along the way.

Is there any advice you would give women currently going through a similar journey?

Stay strong and communicate. If you’re in a relationship, be sure talk to each other and listen to each other. You need one another to get through. Communication about how you are both feeling is key. Talk to friends, family and any charities or support groups too, if you need to. There are so many people going through this or that have been through it too.

Push for answers, do your research and speak to the NHS and proper research bodies (such as Tommy’s). Be wary of putting money straight into the private treatment. And, if you want certain tests / scans or think you might need them, don’t be shy e.g. thyroid function, be sure to ask. Your GP or consultant may not do this automatically for you but should be happy to help where they can.

Stay away from Google. You probably aren’t miscarrying or failing to conceive because you eat white bread, haven’t done three months without a glass of wine or didn’t book acupuncture. Trust in the NHS and medical professionals.

Be true to yourself. As difficult as it is, be brave to accept when enough is enough. Miscarriage and infertility is brutal and can be extremely damaging to relationships and mental health. Not everyone one will get their rainbow baby so be kind to yourself and know that life does not end because your baby dream does. Make other plans and look forwards. This can take just as much courage as continuing with the baby journey.