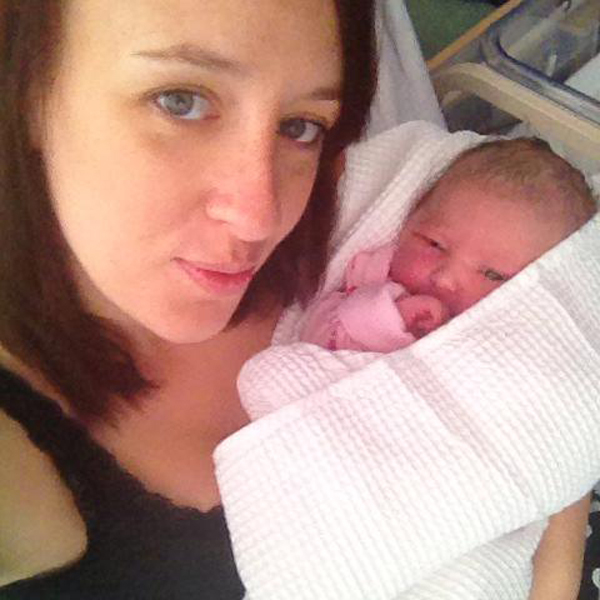 Women who suffer early miscarriage or ectopic pregnancy may be at risk of post-traumatic stress disorder (PTSD) according to a new study funded by Tommy's.

Jemma Willson experienced the heartbreak of recurrent miscarriage and was later diagnosed with PTSD and severe anxiety.

Here is her story

I was a mummy already to a beautiful baby boy when our lives changed.  He was unplanned, just as our second baby was.

Yet, 2 little lines on a pregnancy test didn't scare us the second time around.  We knew we wanted two babies and as our first little bundle was so amazing we knew we could have another.

I was so excited!

I booked in to see the midwife to get my dates all sorted out, and soon after, I saw her and she confirmed our new little one was due in June!

We told our parents, and our close friends and family, and I began rooting through baby magazines, taking vitamins, and planning double pushchairs and where the new baby would sleep.

My husband, the excited Daddy to be, got a loan to pay off all our debts and to get us out of the horrid flat we lived in so we could start a new life, with our complete family.

A month later, when the sickness was just starting, and we were all into the full swing of how more amazing our little family was about to become, something changed everything we knew and the people we were.

I was collecting up socks for the washing basket, and as I lifted the basket to take it through to the machine, I felt a strange little sensation in my tummy.  To this day, I swear I could hear this "pop" sound.

I put everything down, and calmly went to the toilet, almost knowing something wasn't right.

There, on the tissue, was enough to stop me in my tracks.  Blood.

I walked out of the bathroom and stood outside was my little man, asking me for juice.  I got his juice, sat him on the sofa, and put his favourite programme on, while I shook to my very core, and mentally located my phone.

I called my husband, who never answers his phone at work, but who happened to be on a break.

I then called my mother in law.  "I'm bleeding, I need to go to the hospital".  I asked her to watch our son, and she came straight away.

I sat on the end of my bed, cradling my little bloated tummy in my arms, and pleaded with our baby to stay.

The journey to the hospital was filled with my nerves, and my husbands optimism that we'd got it all wrong.  He kept telling me some women bleed during pregnancy, but I knew the truth.

I had a scan, a blood test, and was told there was no heartbeat or baby anymore. They said that I could've got my dates wrong, and to come back in 6 days to check again, but I knew the truth.

When we got home, my husband told his mother what they'd said at the hospital, and I just couldn't take it. "I know the truth!"

Within days, I bled more, and the pains worsened.  We celebrated Halloween with our boy, and I just got on with it.  I ignored the pain, drugged myself up with painkillers, and acted normal.

4 days later, I physically lost our baby, and mentally, the floodgates opened.

We went back to the hospital and they confirmed what I'd known all along. Our baby was gone.

We were offered no form of help, to aid us in dealing with our grief, or to explain our next steps.  We were sent on our way to continue our lives.

In the months that followed we went back to normal-the only difference being, I was now desperate for a baby.  Instead of grieving for our precious little life we'd lost I put my efforts into buying ovulation tests, tracking my cycle, and trying to get pregnant again.

Months and months went by, and when we didn't have any luck, I actually convinced myself that the miscarriage had damaged me somehow.  Then, 10 months after we lost our baby, I got those two important lines on a pregnancy test once again.

Expecting to be elated by this, excited perhaps, grateful we'd been given another chance, I instead felt nothing.

We told my dad, we told my husbands parents. Instead of it being news I wanted excitement and happiness from, I told people in case I needed support, if the same happened again.

This time I didn't go to a midwife straight away, I allowed myself to work out my dates, because I needed to make sure I was aware in case we lost another.

There was no hospital trip this time.  There was just more pain, more blood, more heartache.

As soon as it was all over, we went back to trying, and within a month fell again, and lost again, and I felt....nothing.

"I'm done", I thought, deciding I would put my time into bringing up my son, and not bother trying ever again, because there was no point!

People were often sympathetic, some not so much.

"Maybe they were all girls, and you can't carry girls".

"You're trying too hard".

"Think positively instead of assuming the worst will happen".

It was, after I'd had the third miscarriage confirmed, I was offered tests to see the cause of the miscarriages, which medically now had a name - 'recurrent miscarriages'.

I had a blood clotting test which came back fine and the tests were set to continue to see if they could find a reason why this kept happening to me.

On Christmas Day night, that same year, after a large amount of alcohol, baby number 5 was conceived.

I found out a week before our sons 3rd Birthday in February 2013, and promptly began throwing up pretty much all day every day.

I had no attachment to this new pregnancy.  I lived each day believing this one would leave us too.

We were referred to the Early Pregnancy Unit, where we had scans at 6, 7, 8 and 11 weeks, and all progressed normally.  We saw its little heart beating, but all I kept thinking was "this is going to be so much harder to lose, now we've seen its heartbeat".

Our 12 week scan date came around, a milestone we hadn't made with the three miscarriages.  And there, in the middle of the screen, was this little blob,  still with a heartbeat.

My husband squeezed my hand, clearly optimistic again, but I still couldn't bring myself to be excited, to be happy, to feel anything.

The pregnancy progressed.  I got fat.  The sickness continued way past 4 months.  Our 20 week scan came around, and I was put under consultant care because of my history.

The day we found out we were having a little girl, I thought my head might explode.  For so long I'd battled with the worry I couldn't carry girls, and wouldn't have another baby.

We went to Primark to buy something for our daughter, and I walked around in a complete daze for around 20 minutes, before announcing to my husband, "I need to go home".

I had scans constantly through the pregnancy, and as I got bigger, felt her kicking, and in one pretty amazing scan, saw her beautiful face, I started to allow myself to feel like I was going to have a baby!

Fast forward 3 years and I am a content mummy to a wonderful 6 year old son, and 2 year old daughter.

They're happy, healthy, and make me and their daddy proud beyond words, day in, day out.

Fast forward 3 years however, and I'm not the person I once was.

I have been diagnosed with PTSD, which I was told was down to the trauma caused by each miscarriage, and the lack of follow up care given from professionals.

I have severe anxiety disorder.  Brought on from being so unbelievably paranoid and anxious during every pregnancy, including our daughters, which has spilled over into my life since them, also bringing with it, social anxiety and panic attacks.

I also have mild depression currently.  I say currently because, those who have depression will understand, the moods that come with it, fluctuate day to day.  I have been told I never grieved for those babies we lost, instead I got on with making the next one, fuelled by that rather than stopping to be sad for the children we lost.

There's not a day that goes by where I don't wonder, what they'd have looked like, what they would've achieved, who they'd be as they grew.

The lasting effects and my continual mental health issues, surrounding the recurrent miscarriages, could've been prevented, had I received proper after care and help following the losses.

More needs to be done to help women in these situations, more information is needed, and tests should be carried out quicker and sooner.

I want those women, who share in my experiences, who feel let down, who need help right now, who see similarities in my story, to know, you're not alone, you're never alone - please find someone to speak to, and get help for what you're going through.

New Tommy's funded research has found that woman who suffer early miscarriage or ectopic pregnancy may be at risk of post traumatic stress disorder. if you have been affected or know someone who has and want to read about our research and findings you can do so here.