On Friday 24 April 2020, I woke up with sharp pains in my stomach and back, tightenings and some bleeding. We were in strict lockdown so I couldn't see my GP but after a phone consultation I was told it could be Braxton Hicks contractions.

The pain continued so I went to triage at Worcester Hospital the following day, knowing that something didn't feel right. They said a UTI could explain the bleeding but my urine test was fine so I was told to go home, take painkillers and rest.

Overnight the pain and tightenings got more intense so I called my friend Carol in the morning. She’s a midwife, and she gently told me it sounded like I was in labour and I should go back to triage and not leave until I’d been examined.

At Worcester Hospital’s triage I was timing the tightenings as I was waiting to be seen and they were exactly 3 minutes and 40 seconds apart, but I still didn’t believe it could be labour. I was seen by the same triage nurse as the day before and, although she took my blood pressure, checked my pulse and temperature and confirmed my urine showed a little infection, I felt like she wasn't really listening to my concerns. I insisted on being examined, explaining that something didn't feel right. Eventually she said she’d get a doctor to do a vaginal examination but while she was gone the contractions got tighter and tighter and I remember the feeling of the urge to push.

I went out to the corridor screaming that I need to see a doctor immediately, I had never been so scared in my entire life.

As I was examined I could tell by the nurse and doctor’s faces that something wasn’t right. Then the doctor gently held my hand and said: "Love, I need you not to panic but your baby is coming earlier than expected. I am about to push the emergency buzzer so you'll see lots of people in here that will do their best to help you and your baby."

In that moment, everything felt surreal and I lost it. All I could think was that he was only 25 weeks.

Lots of people rushed into the room and as the nurses tried to put a cannula in my hand, I asked another to call my husband who was waiting in the car park because of Covid. I remember seeing his face as I was rolled to the delivery ward, he looked terrified and I just kept apologising to him as I felt guilty that my body was failing to keep our baby safe inside.

I birthed our baby boy naturally within 90 minutes so it was too late to give me steroids to prepare his lungs or magnesium to protect his brain development because, by the time I was examined, his head was visible in the birth canal. He was resuscitated, intubated and taken away so we didn't get to see or hold him and my husband never got to cut the umbilical cord.

I remember asking my husband for my phone so I could Google success stories of babies born at 25 weeks because I was afraid I’d have to let him go before I’d even held him.

His nurse talked about his condition and that he was born at 960g and 28 cm. He looked so tiny and helpless, bruised all over his body with lots of wires and tubes connected to different machines beeping. My heart broke and I burst into tears.

And then we began an uncertain four months that we weren't prepared for.

The first few weeks he was critical and contracted necrotizing enterocolitis, sepsis, meningitis and had a grade two brain bleed and not to mention all the blood transfusions, needle prickles, cannula. We had the 'talk' many times with the doctors in case things came to worst but he got through and proved us the opposite. We were lucky that he didn’t need a hole in his heart (PDA) repaired but it took him seven weeks to get off the ventilator because he struggled breathing independently.

We were finally discharged on August 17 2020 but we still have follow up appointments and the doctors are really pleased with his progress.

We expect to make it to full term in our pregnancy, give birth and bring baby home to start the new family life but our experience was different than imagined and very challenging and difficult.

The hospital visits during lockdown meant that only one parent could be with him in 24-hour slots which was heart-breaking. The nurses were so supportive but you want your husband there to share your emotions and fears. I would go early in the morning and go home at 11pm, my days were all about being involved in his care. At first he was so tiny I worried I’d hurt him when I changed his nappy or held him but I slowly, with support from the nurses, built a little confidence. The nurses and doctors do an incredible job and I will forever be thankful for the way they looked after our son.

It took me a long time to realise the impact the experience had on me and I’m having counselling now. The guilt is still there as I feel like my body failed to keep him safe. I was devastated that I couldn’t breastfeed and had to accept donor milk, not being able to nurture my baby broke me inside.

I’m incredibly grateful but, if I’m honest, I feel I have been robbed of my pregnancy and new-born baby period and need to acknowledge what I have lost. Counselling is helping.

I barely remember NICU but some moments that pop into my head bring me to tears. Nobody tells you how defeated you will feel when you put your baby back in an incubator and walk down the corridor with empty arms, not knowing if you’ll ever bring him home.

I’m also fearful and assume the worse when he’s ill. We’ve had to go to hospital when he’s had chest infections because he has chronic lung disease and needed help with his oxygen levels and it's been hard to see him at his worst again.

Bringing him home was one of the most amazing days of our lives but adapting was really difficult because there were no medics, no machines, nobody to rely on and I was scared and feared the worst all the time in the beginning.

Looking back we went through so much on our neonatal journey but it gets better every day as he gets bigger and stronger and I’m feeling less anxious and more able to really enjoy him. He is my own little miracle and I'll make sure he knows how incredibly well he's done for being a 25 weeker. 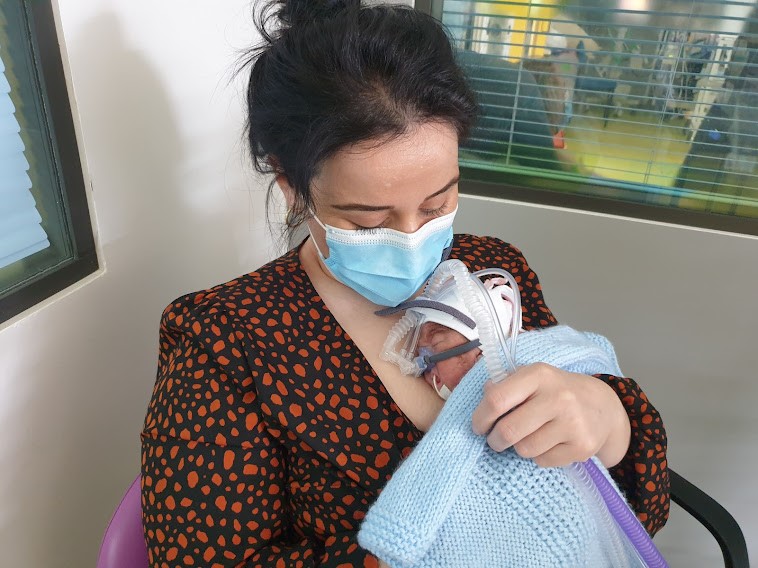