We married in 2016 and we conceived in 2017 after about a year of trying. We were on holiday in Malta and my period was a little late but I have polycystic ovaries so that wasn’t unusual. but a test when we got home was positive and it was a very pleasant surprise.

I’m overweight so I knew I’d be consultant-led and, with no symptoms, sickness or cravings, I didn’t really feel pregnant until about six months when my bump started to show.

It went fairly smoothly – at 12 weeks we heard a heartbeat, our 20-week scan was fine. Everything was until it all went terribly wrong the night I gave birth.

I didn’t feel right on the Friday, really achy and tired. At 6pm I went for a bath and, when I got out, I realised I was bleeding and panicked. I called the hospital who were wonderful; they told me bleeding wasn’t unusual and said to come in for a check.

I got there at 8pm and they monitored baby’s heart rate, which was fine, and checked my blood pressure and urine. I had cramps but thought nothing of it until a nurse asked about it and I explained it was coming in waves so she went for a doctor.

When they examined me I was 6cm dilated and in labour. I burst into tears, I was only 27.6 weeks, we weren’t ready.

The nursery wasn’t prepared, I’d not done a handover at work and our antenatal classes were booked for January, the month before our baby was due – it was only November.

They took me to a delivery suite and the midwife was lovely, talking me through gas and air. They gave me steroids for baby’s lung development and tried to give me magnesium sulphate but it was too close to delivery for it to be effective.

I was in a lot of pain then, suddenly, I felt the need to push. I’d called my mum at 10pm to say I was in labour, our baby was born at 11.03pm. They took her and put her in a special plastic bag, I remember thinking she looked like a roast chicken!

The best thing was hearing her cry, they’d explained she might need help to breathe so I think the cry surprised the doctors as much as us.

She didn’t need ventilation, just oxygen via CPAP on the unit. She was tiny, just 2lb10, but she was this little fighter.
They whisked her off and I went for a shower. The midwife had to find me some shower gel as, when I arrived four hours earlier, I’d only brought my handbag!

At 2am we went to the neonatal intensive care unit (NICU) to see Anwen and she was wrapped up with wires all over her, under a blue light and wearing sunglasses – but she was okay. I was just in complete shock. They’d explained the first few days were the most critical but said her weight was good for her age and the fact she hadn’t needed ventilation was a positive but it was really a case of watch and wait.

We couldn’t stay at the unit and leaving her was hard. I remember desperately thinking ‘I really want to hold you’ but I knew she needed to be looked after.

Everyone on the unit was amazing but it’s such a sterile environment and asking permission to pick your daughter up was hard and just getting her in and out of the incubator was not an easy task.

They didn’t have any beds available for me on the ward and I couldn’t stay in the delivery suite so I asked to be discharged as I only lived 10 minutes away and, after waiting for a couple of hours, I was allowed to go home at 4am.

It was hard leaving Anwen but I knew she was in the best place. I went back the next morning and was there every single day after that.

I remember the midwife trying to teach me to express breastmilk and it was so painful. The doctor said day three was the ‘golden day’ and it was true, my milk came in by then and I’d express continuously through the day.

Initially they said she just needed to grow but her temperature would often spike and they’d immediately start antibiotics, she still has scars on her hands and feet from all the cannulas. She progressed from NICU to high dependency but at eight weeks got late onset Group B Strep and it was the most terrifying part of the whole ordeal. Her oxygen sats dropped and the colour just drained from her, so she was whisked back to NICU. Thankfully, she got better as quickly as she’d gone downhill.

We had a scan at 3 weeks where they discovered cysts on her brain which, they said, were likely to mean she’d have cerebral palsy, which she does have. It was all so unknown at that point and so upsetting, she’d been doing so well.

They tested my placenta which showed inflammation but I’d had no symptoms, no obvious signs of infection and no trauma. It took a long time to not blame myself for not being able to keep her inside longer.

The impact on mental health

There was no emotional support, no offer of counselling and that’s the only thing that could have been better. I don’t think I dealt with the trauma, just wanted to be strong, just got on with it.

She was in NICU for nine or 10 weeks and the only person I spoke to consistently was the chaplain who was my therapy really. I met one other mum on the ward who was supportive and we’ve stayed in touch but there was no professional support.

Anwen is happy and healthy. We’ve seen a consultant, recently transitioned to a community paediatric team and have seen a physio to help her learn to sit up and crawl. She’s progressing, just at a slower rate, she can’t walk yet but she’s been given a little frame to encourage her. All the professionals have said it’s not about ‘if’ she’ll walk but ‘when’ which was reassuring because the fear was that she never would.

I feel lucky in so many respects, I have a great family but if I’d known one other person in a similar situation to me I’d, perhaps, have felt more equipped to deal with it mentally. People say we’re strong but we just get on with it.

My biggest hope is that our story offers comfort to anyone going through what we went through because it’s a traumatic event that can leave you feeling very lonely.

Anwen is a lovely little girl. She goes to nursery four days a week and they all adore her, she’s incredibly intelligent and with cognitive and social skills on a par with her peers. She’s doing better than they ever thought she would. 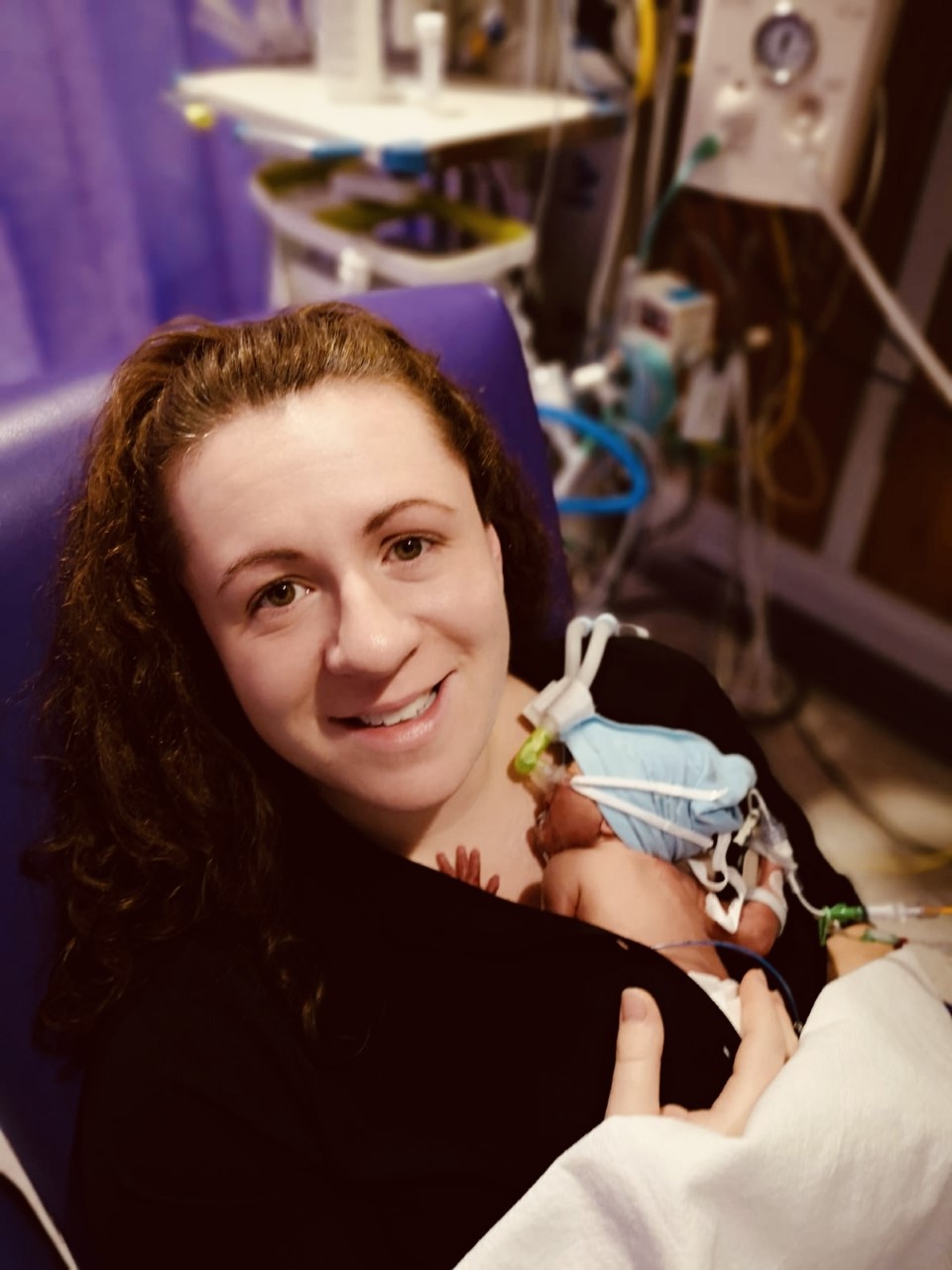