We got married in May 2019, started trying in September and fell pregnant over Christmas. We were so happy and excited, I couldn’t wait to be a mum.

I’d always wanted twins so when a scan at six weeks showed there were 2 babies I was over the moon. The 12-week scan was fine then, because it was twins, they put me on monthly scans; it was at 16 weeks that my whole world came crashing down.

I thought there must be something wrong because they called a consultant in but I was just focused on getting those scan pictures to share with my family. Then the consultant explained both babies were small and one wasn’t growing as well as the other so I needed a referral to UCLH where a consultant would monitor me weekly. I just cried, feeling devastated and that my dream was all going wrong.

A 17-week scan confirmed growth restriction and that my babies shared a placenta so one wasn’t getting the nutrients she needed. They were clear, both of my babies could die.

Every week was a milestone and I tried so hard to be strong but, alone and scared in those scans, I constantly searched for answers. We’d planned a C-section at 32 weeks and pressure mounted as they got bigger and needed more nutrients.

They came at 31+3 because the smallest twin wasn’t moving. It was the week I was being prepared for emergency C-section, so I’d had two doses of steroids on the Thursday and the twins were so active but were quiet on Friday. Then, on Saturday morning, I woke at 1am and started Googling how many movements I should feel as I’d only felt Amelia kick twice which was different to usual. We called the local hospital but, because I was high risk, we had to go to UCLH where they monitored me overnight, waiting for a consultant to arrive and make a decision.

At 9am it was all guns blazing, they fitted me for cannulas and prepared me for an epidural. I felt so alone. My husband walked in just seconds before they were born and I just laid there, wondering if my babies were alive.

I couldn’t see them, they went straight to the stabilisation room then were whisked off to neonatal intensive care, one baby in the highest dependency unit, Room 1, the other in Room 2.

When I was allowed to visit I couldn’t really see their faces through the eye masks and tubes, they were so tiny, Amelia just 910g and Lily 1354g. I was so excited to meet them but, in that moment, had no idea how unwell they were or what was about to hit us.

I remember walking back to the maternity ward where people with new babies were making happy Facetime calls. It’s all those moments that you imagine, balloons, flowers, family, happiness. That’s when it hit me and I felt so scared and alone.

Amelia had a hole in her heart called patent ductus arteriosus (PDA) which can happen in premature babies. I Googled PDA to try and find other parents who had been through this, to find hope. Although there are helplines through charities like Tommy’s, I so needed to speak to a mum who had been through it, who had walked my path.

I was discharged after a week, the day before the twins were transferred to our local hospital and it was a long night just crying and crying, feeling so lonely with my children so far away. How could I have gone home when they could not?

The neonatal staff at Barnet were so supportive. It was hoped Amelia’s PDA would close on its own as she grew but it was such a battle between making sure she gained weight and giving her meds she needed to drain the overflow of fluid from her heart that affected her weight gain.

They started to talk about Lily coming home before Amelia which was a heart-breaking thought, leaving hospital with one child in a double buggy. But then Amelia became ill and the nurse explained that Lily would be safer, less at risk of picking up infection at home.

It was a happy day taking Lily home but I couldn’t really enjoy it while Amelia was still in hospital. My heart was in two different places.

After around eight or nine weeks they reached out to Great Ormond Street Hospital about Amelia’s PDA. Only parents were allowed to visit so I spent three days away from Lily and my husband while Amelia had her surgery. She weighed just 1100g and looked so tiny laid on a hospital bed as I watched them place a mask over my tiny human being.

I paced Great Portland Street for four hours waiting for a phone call. She was one of the smallest babies they’d ever operated on and it was high risk but luckily the surgery went amazingly and I saw the change in her immediately. We were transferred back to Barnet a couple of days later and went home within two weeks.

I must have fallen pregnant straight away with Ella-Mai, I think a tiny part of me wanted the ‘perfect pregnancy’ but my world came crashing down again. This time, the problems weren’t picked up until later as I had fewer scans. It was growth restriction again and it was a lot harder this time, I felt so guilty, like there must be something wrong with me.

They tried to get me to 34 weeks but she came at 32 and it was much more difficult this time round with two babies at home and one in hospital. Ella-Mai came home after five weeks and is fantastic now. She has a hole in her heart but we are hoping it will close on its own or it will mean surgery when she is one. She is five months now and doing amazingly well, an absolute treasure.

I haven’t had a lot of emotional support and I’ve used my Instagram to try and raise awareness because although NICU is incredible, there’s a gap when it comes to having someone to speak to. And you need someone to speak to, someone who understands, with a voice like yours.

You just do not know what the NICU world is like unless you find yourself there but it was there that I learned what strength and hope is, and that’s been life-changing. 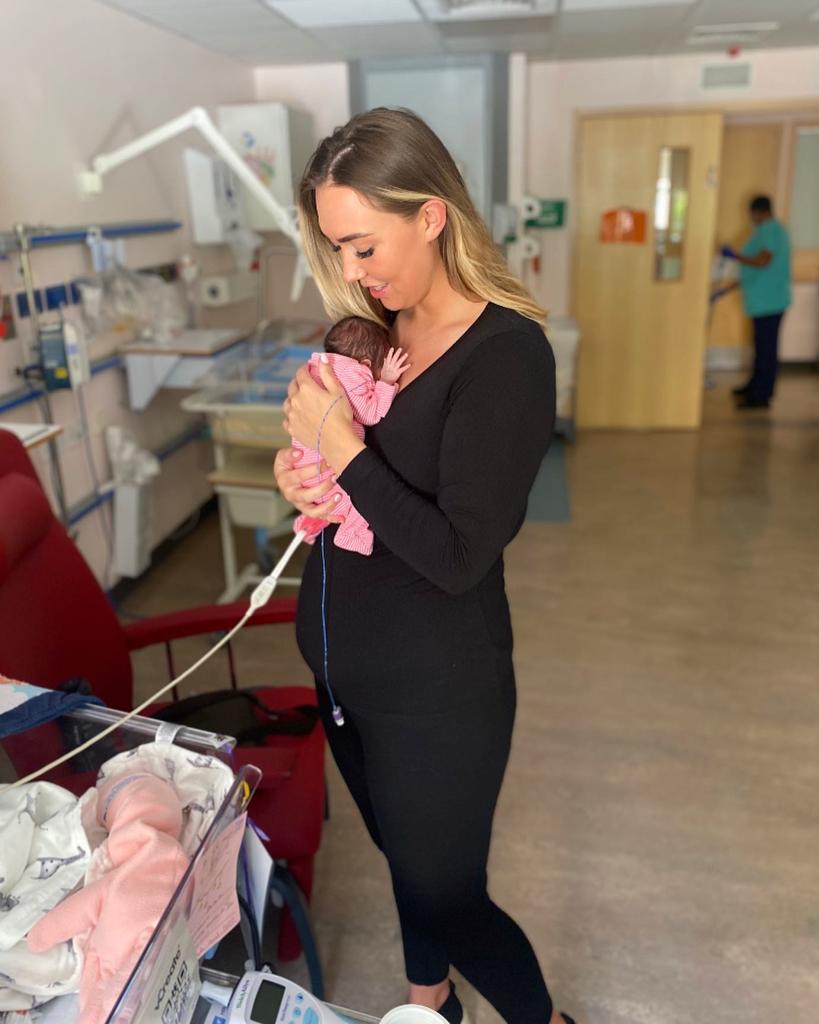 Layla is part of our #WeSeeAMum campaign this Mother's Day. Find out more here.