My first pregnancy was high risk because I had gestational diabetes so I was induced at 37 weeks but Daniel was absolutely fine.

We started trying again when he was 6 but nothing happened and, as time went on, I started thinking it never would. But it was when we kind of gave up that it happened in November 2018 and I became pregnant with my little girl.

I bled quite a lot and was admitted to hospital twice, scared I was losing her, but scans showed she was fine. My urine tests kept showing infection but I had no symptoms so wasn’t treated.

On 1 April I’d not felt much movement, so the midwife came and the doppler showed she was fine – but the next morning I was bleeding, so the hospital said to come in if I was worried and I was. I knew I shouldn’t be bleeding at 22 weeks.

I spent 3 hours in the Royal Victoria Infirmary (RVI), was asked lots of questions but felt fine so, when the bleeding stopped, they were going to send me home. A doctor asked if she could do a quick internal before a left and I was 3cm dilated and my waters were hanging out. I couldn’t believe what was happening.

So many doctors came in and seemed to agree the options were to wait and hope I didn’t go into labour or take part in a trial where they’d push the waters back in and insert a stitch which was risky because the waters could burst and I’d have to deliver anyway.

I spoke with my family and decided on a stitch. The procedure was a success but they kept me in for 3 days to monitor me before sending me home on the Thursday night. The next morning I went to the toilet and my waters broke, I was hysterical.

I wasn’t contracting as the ambulance took me to the RVI but, during the early hours of Saturday it began – I was only 23+3 weeks. They gave me magnesium sulphate and steroids to help baby’s brain and lung development.

There was no room on NICU so they wanted to transport me to Sunderland Hospital, but they wouldn’t accept us as we were under 24 weeks.

A doctor at the RVI said I could refuse to leave and they would deliver and stabilise the baby there but, at that point, everything stopped and we went back to the ward.

By Sunday I was bleeding and having contractions so it was back to delivery for more magnesium sulphate and steroids but, after a day in labour, things slowed and again I went back to the ward.

I woke up in agony the next morning so, again, back to delivery for more magnesium sulphate which was the worst thing, like being lit on fire from the inside. That evening my bloods showed I had sepsis even though I had no symptoms.

They wanted to do an emergency C-section saying my life had to come first but I begged them not to because I knew every hour she was inside me would make her stronger.

At 7pm the midwife did an internal and found the stitch was ripping through my cervix, she spent ages trying to get it out and I could tell she was struggling, there was blood everywhere and she was sweating and looked close to tears. Then the cord came out.

I was rushed to surgery, there were so many people in the room. They injected me to send me to sleep and the midwife held my head and tried to reassure me.

I came round, surrounded by my family, and just thought my baby must be dead but in fact they were still working on her. It took 5 hours to stabilise her and the doctor didn’t expect her to make it through the night. My husband, son and rest of my family went to see her and took some photos for me but they were all crying and I couldn’t cope so I sent them home.

When I finally saw Charlotte in the early hours it was shocking. You could see through her skin, see her tiny heart beating in her chest and I wasn’t prepared for that – I’m not sure anyone could have prepared me.

I’m a person who likes to find solutions but there was nothing I could do and I’ve never felt so out of control. I knew it would break me if she didn’t survive. We had her christened then it was just about taking it hour-by-hour.

You wait for someone to come and tell you the worst but time ticked on and she was doing a million times better than expected. Later, when I was asleep, they told my husband she’d take a turn for the worse and they didn’t expect her to live. Things change so fast, it’s hard to hope, but she survived.

It’s a roller-coaster, at 6 weeks they said she’d need surgery to close a valve in her heart but it closed itself while they were arranging transport to another hospital.

She finally came home at 38 weeks and was on oxygen for about a year but she’s perfect and we feel so lucky.

We celebrated her coming off oxygen, there are so many more milestones with a premature baby, along with first smiles and first words we celebrated her opening one eye and growing nipples! It’s surreal.

It’s been awful emotionally and we were lucky to get support from a psychologist in the hospital, we’d never have got through without her. At first I didn’t want to talk with other parents in NICU, I just felt I couldn’t take on their pain too, but I did make friends and I still speak with them today.

I saw a counsellor for a year who diagnosed complex PTSD.

The counsellor gave me CBT and EDMR before Covid hit and it stopped, but Covid did mean my husband was off work and I’m so glad I had his support.

I remember Googling and finding a story of a baby born at 23+5 who survived and I hung on to that. I only hope our story gives someone else that comfort.

The experience has changed me; I don’t care about the small stuff now. In a weird way, I’m happier – I don’t waste life because I know just how lucky we are to have our fearless little girl. 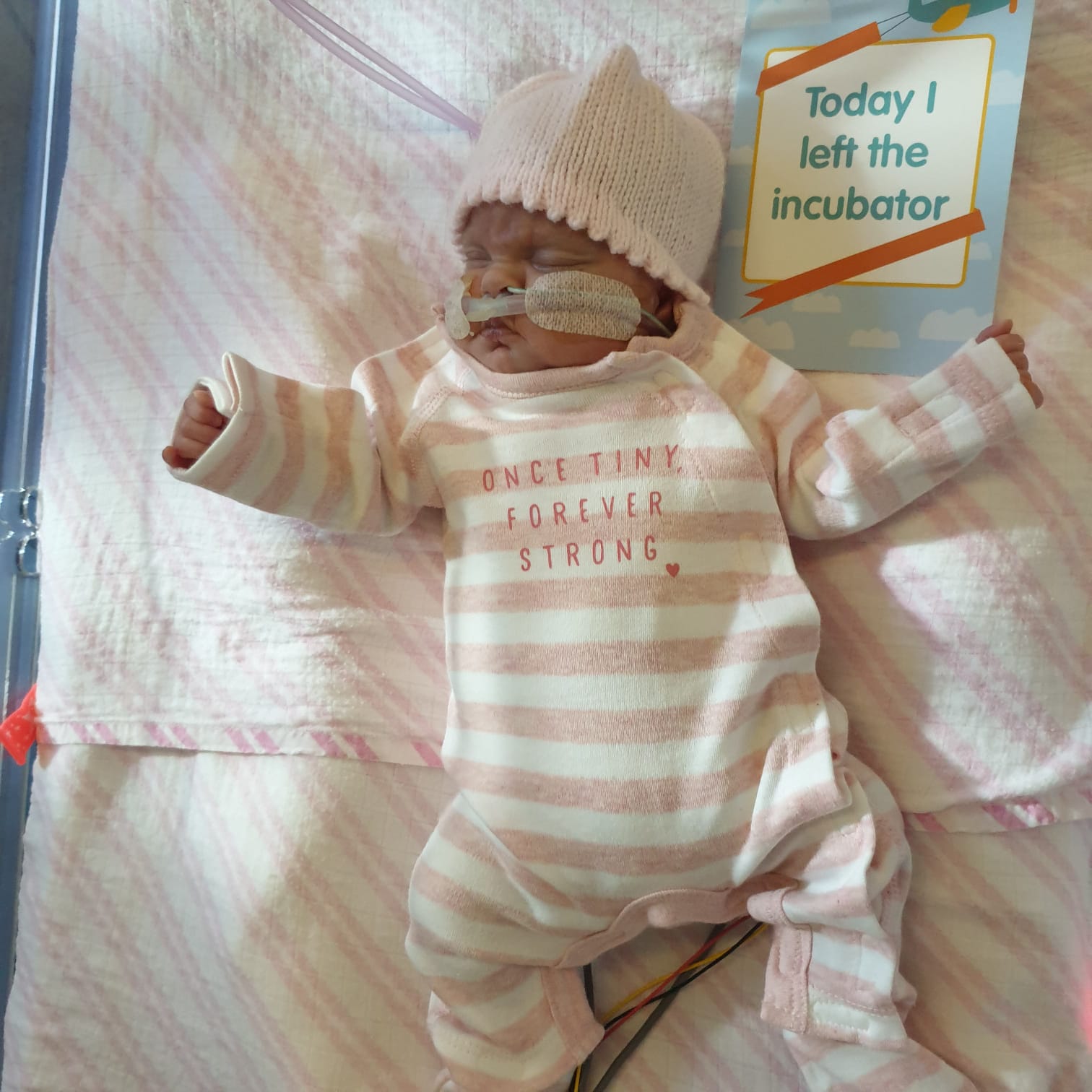