Our son, Jaxon, had arrived 2 weeks late after Sarah was induced but it was a normal delivery and there were no inklings of what would come. We decided to add to our family and, before we knew it, Sarah was pregnant with Olive.

She had some bleeding so was in and out of Wythenshawe hospital. On the Saturday before Olive arrived, the doctors told Sarah she was fine to go home but she was adamant something was wrong.

We were referred to St Mary’s in Manchester when they realised our baby girl was going to be born early, at just 24 weeks, and I remember being so nervous and worried for the baby and also for Sarah.

We’d been told they would always save the mother at this point if something went wrong and it was so stressful. Jaxon was at home so I was splitting time between hospital and home. Leaving Sarah was awful, I’ve never felt so helpless.

Sarah went into labour in the early hours of Saturday and they gave her magnesium and steroids to help Olive but it was awful to watch Sarah go through that. Then everything stopped until I got a phone call on the Monday to say she was back in labour again.

Olive was delivered pretty quickly, she came out in the sac. The NICU staff had been great making us aware of what might happen and we’d actively searched for positive stories of early births and really struggled to find them. We did find a lot of statistics and figures and you just worry yourself to death, you fixate on percentages.

They took our daughter to the other side of the room then let me go and see her and I was so nervous, I just wanted her to be okay. It’s scary really, emotions are so high and you just want to protect your daughter but we were reassured knowing that Olive was with experts and very confident that the doctors at St Mary’s knew exactly what they were doing.

We had a 5-hour wait before we could see her which felt like forever, but because of COVID guidelines we could only visit one at a time. Sarah got very emotional and ended up collapsing which was tough because I wanted to look after her and look after Olive too.

NICU was overwhelming at first. It’s an amazing place, all the babies, all the machines, I’d never seen anything like it and the work they do in there is unbelievable, the care that they give.

Seeing how tiny she was, seeing all the wires, the tubes, the beeping monitors was scary and I felt so daunted, I didn’t know what to ask, what to talk about, I just sat by the incubator looking at her, watching the monitors. You do become more confident over time as you learn what to look for, what questions to ask.

COVID rules meant we couldn’t spend time with our daughter as a couple for 5 weeks which was really tough. Olive was on a ventilator for about 10 days then CPAP but she didn’t react well so went back on the ventilator for another week. She also needed a number of transfusions.

She was finally moved from St Mary’s back to Wythenshawe at 32 weeks but the journey was 1 step forward, 2 back, good days and bad days. The main worry was her saturation levels which were a concern for a while but the nurses were very positive and she was gaining weight.

When I got to hold her for the first time it was nerve wracking, she was so small and there were so many wires but the nurses were so good and explained she was sturdier than she looked. I just wish I’d been able to share that moment with Sarah.

Time as a family

Taking her home on 2 September was emotional, although Jaxon knew all about her he’d never seen her and them meeting for the first time was a lovely moment, there were tears. Just having all 4 of us together was massive, very special.

Olive came off oxygen on New Year’s Eve. We had a call to say her results were good and we could remove the tubes and it was an incredible start to the New Year. Initially it was nerve wracking having her at home without the doctors and nurses but Olive was progressing really well which reassured us, she is such a happy little girl.

Sarah had contact with a charity which she found really helpful mentally, just being able to talk, to process what we’d been through.

I found it hard because I wanted to put on a brave face for Sarah, to try and be positive and reassure her but then I’d have to come away from hospital and leave them there.

Those were some of my most vulnerable moments, my parents at home with Jaxon, Sarah and Olive in hospital and me on a 20-minute drive between them, just thinking, processing.

I’m generally a positive person and Olive was doing so well, getting stronger and stronger, so I fed off that. It’s not possible to prepare for something like this, you just take every day as it comes and desperately try to stay hopeful and optimistic rather than looking too far ahead and fearing the worst.

I feel so very lucky, Olive is the most determined little girl I’ve ever seen, she knows exactly what she wants and I love that about her. She has fought so hard in her short life, gone through so much more than I have in my lifetime but she’s a feisty little thing and seeing her with her big brother, watching Jaxon care for her, is just amazing. I wanted to speak out because, when Olive was born, we desperately looked for positive stories and couldn’t find them. 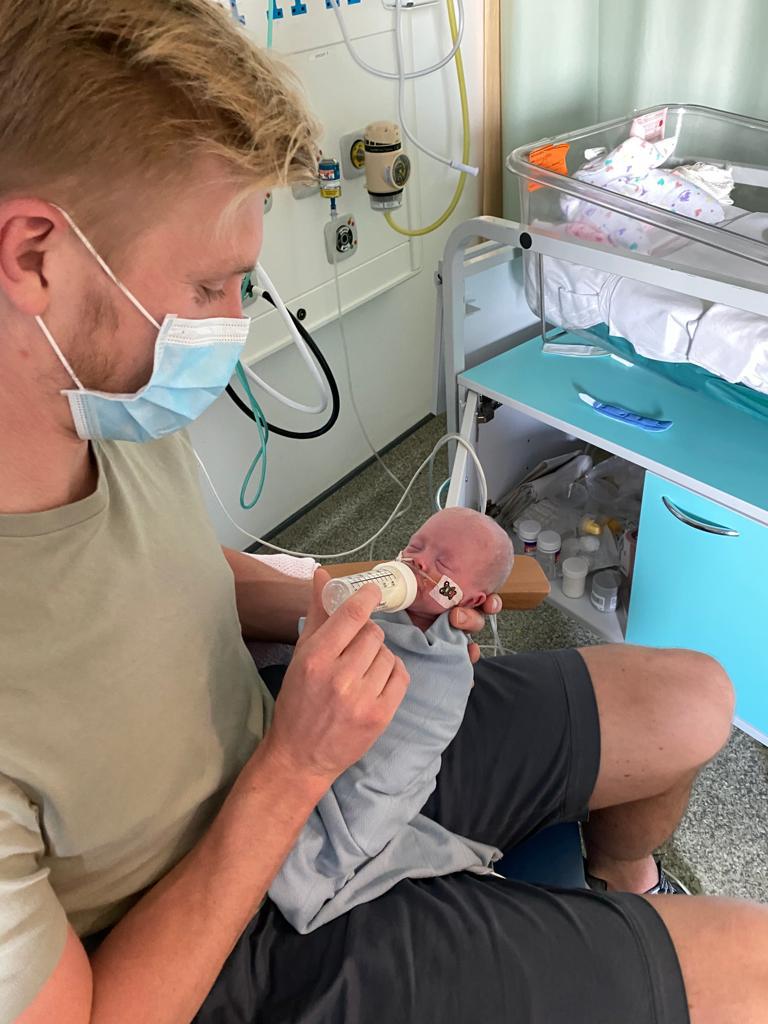 Ben is supporting our campaign to end preventable premature birth.