We got engaged after 8 years together and decided we wanted a baby more than a big wedding. I conceived quite quickly but lost the pregnancy a couple of days after the positive test which was a shock.

I fell pregnant with our daughter in February 2020 and was fine other than a little morning sickness and headaches. Then the midwife called a week after my 12-week scan to say a blood test showed I was low in PAPP-A protein in my placenta and there was a small risk of growth restriction. The 20-week scan went well then, at 27 weeks, a growth scan confirmed that Roisin was going to be tiny.

Covid meant I had to go to the appointment by myself and that was hard because, even though they reassured me the risk was low, you still spend the whole time worrying.

When the sonographer wanted to re-scan me because some bones were coming up short I thought I was hiding my upset well under my Covid mask but, when I saw myself in the mirror, I realised I wasn’t.

Once the growth restriction was confirmed, we were sent to Oldham at 29 weeks to see a special consultant to make sure that, even though baby is small, they were developing normally. I felt reassured and supported as we came up with a plan to deliver baby at 36 weeks and have weekly scans until then. They made it clear that if I had any concerns I should go straight to triage at Manchester or Oldham.

The plan didn’t happen though, Roisin was born less than a week later.

Reduced movements and an emergency C-section

I’d been off work with stress and was due back on the Monday, but the day before I felt Roisin wasn’t moving like she normally did. I called triage and decided to go in, fully expecting them to send me home. I only took my maternity notes and phone, Elliot only took his wallet but when they did the trace they weren’t happy so sent us to the labour ward where we spent the next 24 hours being monitored.

After that everything looked okay, we went back to antenatal and the plan was to send us home on Tuesday. If I’d been further along and there’d been no growth restriction they would have delivered her on Sunday but they couldn’t decide if she’d be better off being born or spending longer in the womb and it needed two consultants to sign off on a decision.

They gave me 24 hours of magnesium and two steroid injections when I was on the labour ward. Her heart rate would dip but she brought it back up herself and was coping well so they planned to leave her be and I’d have 3 scans a week from that point but, on Monday night, they did another trace and the midwife wasn’t happy.

A few hours later her heart rate was still dipping but she wasn’t recovering with the same energy so they decided she had to be born. It was an emergency C-section at 30+4 weeks.

It was so stressful and scary when they told us and I was so tired having had no sleep on the Sunday and Monday night. When they transferred us back to labour I thought we’d be monitored again, it never occurred to me she might be delivered but the doctor’s certainty eventually made me feel calm and confident about their decision.

We’d been prepared for the worst, she’d need to be ventilated, we wouldn’t see her as she’d be whisked off to neonatal intensive care (NICU), so I think we were all surprised when she came out crying, stronger than anyone expected her to be.

She was never ventilated, she breathed for herself with support from a nasal cannula attached to a vapoterm outside her incubator after a couple of days. It was scary going to see her that first time and I found it hard being on a postnatal ward surrounded by new babies, it was much easier when I went home.

We spent 11 weeks on NICU and I went to see Roisin every day. The staff were really sweet and involved us in her care.

It just becomes your life, you don’t think of anything else.

At first I felt overwhelmed but you sort of get comfortable there, I knew what to do and felt very supported.

Nobody expected us to be there that long but Roisin struggled with feeds. She was on fluids for the first 24 hours then total parenteral nutrition (TPN) with breastmilk feeds added slowly to bring her off the TPN. That took two attempts, on the second she went to hourly feeds of breastmilk through a nasal gastric tube. The plan was to try two hourly feeds but after the second attempt she became very unwell.

That’s when they confirmed she’d perforated her bowel in the womb, she was just 4 weeks old. It had healed so they thought it could be scar tissue causing the problem. They decided to try the two hourly feeds one more time which, if unsuccessful, might mean surgery but she was fine on that third attempt.

She still struggled to gain weight so, around 7 weeks, they gave her a little formula and I was fine with that, I just wanted her to gain weight so we could go home and in the end we went to three quarters formula which worked and she’s really piled on the pounds since coming home.

There were also concerns about her liver and at 8 weeks we had a liver scan at a specialist unit in Leeds. She has a porto-hepatic shunt which means some of her blood doesn’t get filtered through her liver. She may need surgery if it doesn’t close by itself, we have an appointment with a paediatrician next month to see how serious it is.

It was amazing to bring her home but scary without that support from medically-trained people. When she was born it was all about her and it wasn’t until February this year that I realised I wasn’t myself, I wasn’t handling any stress at all.

I’ve had treatment for anxiety through a group and I’m now having trauma therapy and am feeling better just for knowing what is wrong and having the tools to manage it but this experience has changed me as a person.

I think the most important thing I want to say is that, when I knew about the growth restriction, the midwife recommended an app to monitor movement. We did debate going to triage that Sunday night, we didn’t want to make a fuss and honestly thought we’d be home in an hour. I dread to think what would have happened if we hadn’t gone.

To anyone worried about their baby’s movement I’d say that if you’re in doubt, go to the hospital.

I would much rather be the funny story the midwife tells about an over-anxious mum-to-be than the desperately sad story of a baby who didn’t make it. 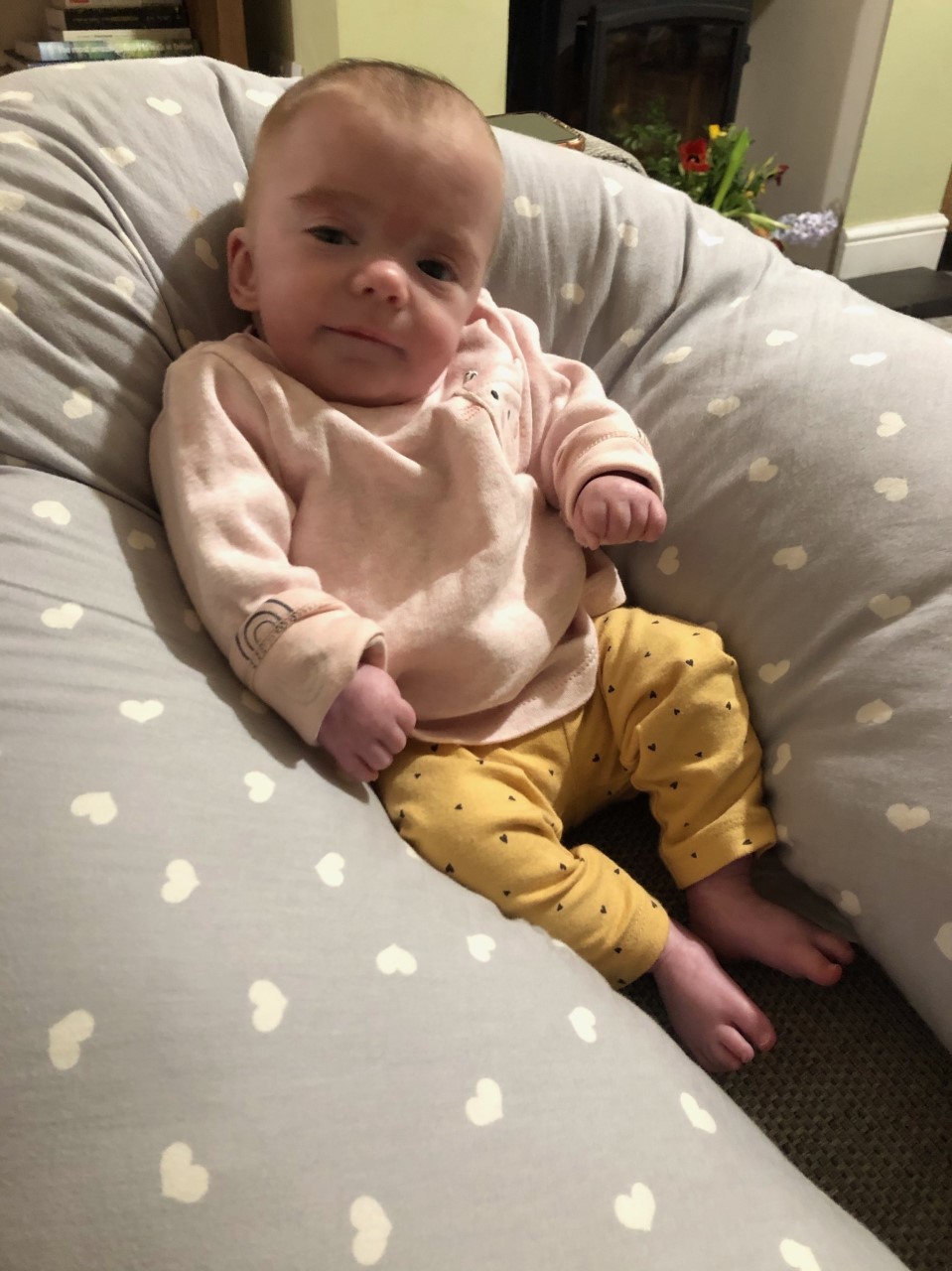