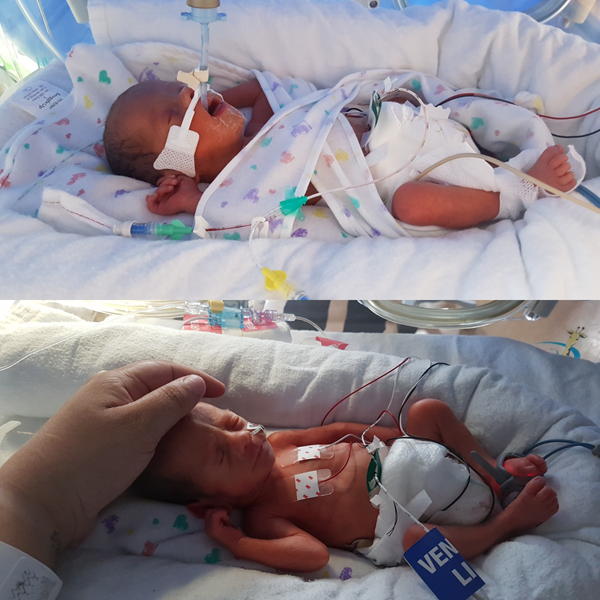 In October 2015 we were going for a private sexing scan, we were so excited after 8 years of wanting another baby we were actually pregnant.

As I lay on the chair staring at the screen waiting to see the sex she switched the monitor off and asked us to come back with a full bladder as she couldn't see the sex.

I literally drank 4 bottles of water in 30 minutes so eager to get back in. The sonographer came back out but asked us to leave our daughter outside. So confused we went back in lay down again staring at the screen.

The woman's face changed and held my hand and said there was no heartbeat! And told me baby was measuring 14 weeks. How? I was 17 weeks pregnant!

We immediately went straight to the hospital demanding another scan. We were turned away and told to come back Monday to the EPAU as it was Friday and no one was available. I had no signs of miscarriage so it wasn't an emergency.

The weekend I drove myself insane not knowing what was happening.

Monday came and they confirmed we had lost our baby at 14 weeks and the next day was sent to delivery it was horrific a cold empty ward with just 2 nurses on the side of the maternity ward where everyone else was having babies I was miscarrying.

Whoever did the layout of that needs sacking!

We decided not to see the baby as we was told it wouldn't be a pretty sight as it was really under developed. We didn't know the sex and we didn't know what went wrong still something that haunts me today!

We had a small ceremony and put the ashes with my mom. We decided not to have anymore and to be thankful we have a beautiful daughter.

But in January we found out we were expecting again. At 9 weeks I had a bleeding and went straight to the epau.

We waited to be told there was no heartbeats again as her face changed. But she looked up smiled and said there's a heartbeat but not just one there's two.

I didn't want to enjoy the news in case something went wrong. I didn't enjoy this pregnancy, every scan, every review I was just waiting for bad news.

At 28 weeks I was told the twins had iugr and the EDF flow had stopped to twin 2 and was intermittent on twin 1. I also had gestational diabetes and pre eclampsia I spent days in hospital with daily scans monitoring and trying to control my blood pressure.

At 30 weeks the decision was made to get the twins out as my blood pressure was out of control but due to no cot space available in any near hospitals I was kept on the ward not knowing if they would make it or not.

My blood pressure got really unstable I was taking different medication the hospital rang every neo natal unit in the country and at 31 weeks tauton hospital in somerset rang to say they had 2 cots .

That day I was transferred out from Walsall to Somerset miles away from home and on my own.

My partner couldn't get down to me on the night but at 18:56 twin 1 was born weighing 2lb 6 he was breathing air the day he came out and at 19:00 twin 2 came at 2lb he was quite poorly when he came out needing a lot of breathing support but came off oxygen on day 50.

My partner missed the birth and I was put to sleep half way through due to the spinal failing.

We spent 11 days in nicu in Somerset and then 8 days in Worcestershire nicu until we could get to our booking hospital. Twin 1 Alex was sent home after 6 weeks in neo natal and twin 2 Reece came home after 9 weeks in neonatal.

Now I have 2 beautiful boys my rainbow babies made against all odds.

It's been an horrific experience and having premature babies really sucked all the fun and joy out of something that was meant to be the happiest time of our lives.

Musgrove hospital were fantastic we were given on site accommodation. I really believe if we weren't transferred, they wouldn't be here today.

I do really think neo natal services need more funding as I spent 3 weeks away from my daughter, her away from her brothers, our family was torn in half. It's already difficult enough let alone been miles apart.

9th of October was their due date and now their 9 weeks old weighing 6lb 3oz and 4lb 15oz.