The Monday of that week I started to feel like I was full of cold and had this strange pain under my ribs. I took some paracetamol and just thought it was the baby growing.

When I got to the midwife on the Wednesday I was prepared to get my blood pressure checked and go back to work. How wrong I was.

The midwife checked my blood pressure a few times. Then she said she was arranging for me to go to the hospital.

The midwife wouldn't let me drive

She wouldn’t let me drive, which scared the heck out of me. I had to wait for my partner Craig to come and pick me up from the doctors. I spent the drive in tears, with Craig trying to tell me everything was going to be fine.

When we got to the hospital I had my blood pressure taken another load of times. I was then taken to the high dependency unit.

We had a scan and discovered our baby was a girl.

At this point I don’t think I fully understood what was being said to me. They were talking about having to deliver the baby and I was being given steroids to mature Ebony’s lungs, but in my head I thought it would be fine. One part of me was still expecting to get tablets and go home; the other part thought that even if she was born we would just bring her home with us.

On the Friday night the rib pain started again. Over the next few hours I sort of remember different consultants and doctors coming to see me. I half remember the paediatric consultant coming to visit and trying to explain what would happen. We were asked all sorts of questions.

The last thing I remember is them struggling to control my platelets and hearing the words ‘extreme pre-eclampsia’ and ‘HELLP syndrome’ and the doctors trying to get a needle into me for the anaesthetic. They even tried to put a needle in my neck as they were running out of places to put it. I didn’t care. All I wanted was my little girl.

What happened after this is a blur but I found out later that I was in danger of organ failure and a heart attack, and both our lives were greatly at risk.

Ebony was born by C-section on 4 Feb 2012, three days after that ‘routine’ appointment, weighing 511g with her hat and her tube. She was 26 weeks and 2 days.

She was born just as the first snowflakes fell that year.

I don’t have much memory of the next two days but this is where our lives really changed.

Little did I know that the Intensive care unit would become my new home. 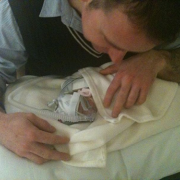 Ebony was transferred straight to Neonatal intensive care unit (NICU). She was put straight on a ventilator. I was given two blankets, one for me and one for Ebony. (They were to be swapped every day to help bonding through smell and to help me produce milk.)

When I was told that I could go and see Ebony, I had to wait for Craig to come to the hospital to wheel me to NICU. With my catheter attached we turned into the intensive care part of NICU.

Little did I know that this would become my new home.

In front of me was an incubator with lots of machines and monitors around it all bleeping and making noises. Even now, two years later, I still think I can hear the beeping.

Inside this little incubator was a bright pink alien. Everyone thinks this is a strange description but she didn’t look like a conventional baby. She was tiny and pink.

All I wanted to do was pick her up and cuddle her but she was so tiny and precious that I was scared touch her. She had needles and tubes in her arms and tummy, they were so tiny and delicate. No one knew if she was going to be ok or not. It was up to Ebony from now on to fight.

The word rollercoaster is mentioned a lot in NICU and boy is this word that best sums it up.

I cried every day.

During this time Craig had gone back to work and I came to hospital every day.  I sat with Ebbs until Craig came home from work and he could come and pick me up.

Ebony went through so much. 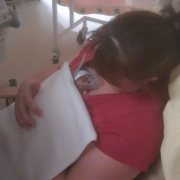 We had to think about practical things like paying for parking. It can be really expensive to have a baby in NICU, but we found the money to travel and park. You just do. Silly things played on my mind: Do we have fuel in a car in case we get a call? Do we have change for the car park?

Ebony went through so much. She was given antibiotics and tests and results and more tests and results. She got an infection, she had blood transfusions, lumbar punctures…  One day I remember Ebony was having a tough time. They were trying to get some more antibiotics into her for another infection but she was very poorly and they couldn’t get a cannula (little tube) into her. The third doctor was trying to get it in. Craig had to leave as he couldn’t see her in so much pain but I couldn’t. I was glued to her side, If Ebbs was going through this so was I.

At one point, the lady in the next bay gave me a diary that someone else who had been on NICU had written. That lady turned out to be Janet, who was in with her son Alfie. We have been totally inseparable (we have even been on holiday together) since.  To this day we text most days and try to meet once a week (we live over an hour apart). It’s so nice to have someone I can cry at or just say. ‘Help! Am I doing the right thing?’.

I could feel her warm little body

I didn’t get my first cuddle until three weeks after Ebony was born. (I still cry thinking about it.) It took two nurses to bring her out with all her wires and machines.  She was placed on my chest and my jumper was put over her. I could finally hear the noise she was making, a squeaking noise. I could feel her warm little body and her hands tried to curl round my skin not just my finger.

On 1 June 2012, nearly four months after Ebony was born, it was time to bring her home. And yes, she came home with oxygen and monitors in tow. Yes I was scared of having to have tubing and oxygen tanks around the house. We had two dogs and the thought of them getting tangled in it was interesting. 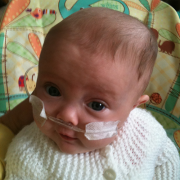 Coming home with oxygen turned out to be fine. There were times Ebony did her own trials in air, normally after removing  her prongs and trying to eat them!

I became better at going out to the shops with her but could only do small shops. Shopping trolleys don’t have oxygen spaces and there were comments from people: ‘Oh look at that poorly baby!’ Some days I wanted to get on the loudspeaker and say: ‘She’s not poorly, she just needs a little help!’ Sometimes I found it hard as well to see newborn babies and ladies with a big bump. I never got a bump (just flab).

Ebony is now 2½.  She has just started nursery which she loves and can be found at the door with her bag and coat on before its time to leave! We are very lucky to have come home with such an incredible little lady. Talking and walking has taken its time but it’s now here in full force.

Craig is still doing loads of charity events. Last year he did the London marathon dressed as a baby, this year he is walking 130 miles for World Prematurity Day to raise awareness.

In 2013 Heidi received a First Hug Award at the Tommy's Awards. She was nominated by husband Craig.

Read more is so important