The BBC's Victoria Derbyshire programme has reported that women at 75% of UK maternity units are being denied their right to choose a caesarean (c-section).

The official National Institute for Health and Care Excellence (NICE) guidance says women should be allowed to opt for a planned c-section even if it is not for medical reasons. However, of the 146 trusts that shared their policies with the Birthrights charity, only 26% fully complied with the guidelines.

They also state that if one obstetrician is unwilling to perform an elective c-section, the woman should be referred to another who will. 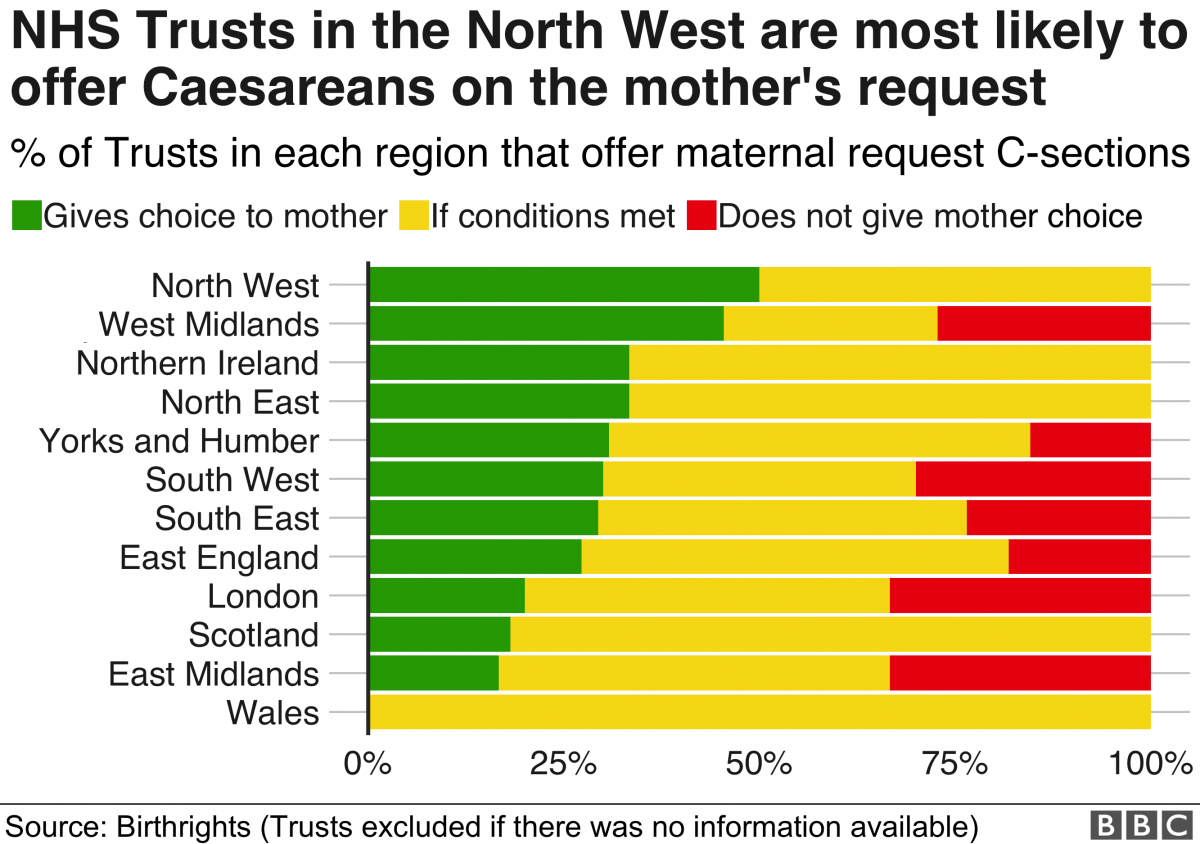 Making the decision to have a c-section birth is not one that any woman makes lightly. It then takes courage and for many women it is problematic for their request for a c-section to be upheld. Women need to have the opportunity to meet with health professional and take time to explore their decision with the access to evidence based information. Better Births (2017) gives us a vision for maternity services in the future where women receive individualised care that supports their choices about how they give birth

One woman whose request was denied was Lucie Tidman. When she gave birth to her first child, six years ago, she had a serious haemorrhage and was later diagnosed with post-traumatic stress disorder (PTSD).

During her second pregnancy, she asked for a c-section, to avoid any more trauma, but was told it was not possible.

She had another haemorrhage and her baby went to neonatal intensive care. She said:

She had to have rescue breaths and my other half saw her come out purple. She got taken one way and I got taken to theatre. It was horrific.

A spokesperson for the Royal Cornwall Hospitals Trust, where Ms Tidman gave birth, said it practised evidence-based care with respect to c-sections.

If a woman requests a Caesarean section when there is no clinical indication, we follow the guidelines... but only after thorough exploration of all the issues.

If you are having a planned c-section, you will see an obstetrician (a doctor who specialises in women’s care during pregnancy, labour and after birth). You will also see a midwife at each of your maternity appointments. Possible medical reasons for planned c-sections include:

Some women with HIV or genital herpes may be offered a c-section in some cases to prevent passing the virus to the baby.

The obstetrician will explain the benefits and risks of a c-section and your other birth options. It is your decision; you don’t have to have a c-section if you don’t want one.

There is no evidence that your height, or the size of your baby, can predict whether you will need a c-section. If you are short or you have a small pelvis or small feet, this doesn’t mean you can’t have a vaginal birth if this is what you prefer.

If there are no other complications, expecting a large baby also doesn’t mean you will need a c-section.

Women have frequently asked the Tommy's midwives whether the following actions during labour lead to emergency c-sections, but there is no strong evidence that they do:

Read about what happens during a c-section here.

Read about preparing for a c-section here.