So I made the most of having two very chirpy ladies today, one of whom was a very friendly and enthusiastic student midwife.

They asked me if I'd received the results of my nuchal translucency scan – which had come back as 1 in 1,567 chance that the baby will have Downs Syndrome - low risk. There was also thankfully nothing to worry about with regards to the results of the other tests done as part of the combined screening tests.

I got the results of all my blood tests which were done at the booking appointment, which were luckily all fine too. I found out my blood type and also was told that people from the same geographical area tend to have the same blood type! Some spooky biology there. I'm also RhD positive, which means I won't have to have any injections which RhD negative people have to have – more good news. I also have very high iron levels which is also useful. So lack of iron isn't explaining why I'm feeling tired, that's just part of growing a baby!

So now for the exciting part - I got listen to the baby's heartbeat! My friend told me that this would probably happen but that they don't do it for everyone. I'm not very good at asking for things so I was hoping they would just do it – and they did. It took a little time to find the heartbeat which was slightly nerve racking but then came the sound of a galloping horse. It was so loud and so fast! The student midwife said it was the loudest one she'd ever heard. I don't know how many she'd heard previously but I still felt proud of my little person. When I told my husband about this he said it was strong because it was very much loved – cute!

I was also asked if I'd felt the baby moving. I have had some strange fluttery, bubbly sensations, which they said were definitely the baby moving around. I wasn't sure if it was just wind or my imagination but apparently not! My baby is about 12.5cm long now which when you look at a ruler is actually pretty big for something inside you – no wonder I can feel something!

Next stop is the 20-week scan which I'm feeling pretty excited about. We've decided to find out the sex of the baby so it will be a big day for us! 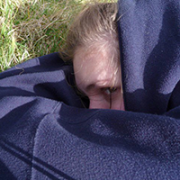