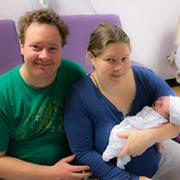 I didn’t realise I was pregnant until I was eight or nine weeks but when we found out we were delighted.

We discovered we were having a boy and we excitedly started buying clothes and toys. It didn’t occur to us that anything could go wrong after that point.

I loved pregnancy and, apart from a blip at 32 weeks when they thought he was measuring slightly small, everything seemed fine.

My due day came and went with no sign. I had a sweep at our 40 week appointment where they also found my blood pressure was on the border of hypertension but they weren’t worried, so neither were we. I’ve since discovered that, we should have been sent for monitoring, but I wasn’t.

We left having been told they would induce me on Tuesday, five days after my due date.

At home we carried on as normal. As far as I was concerned my baby was moving normally. On Saturday I still felt like he was moving, I know now that he couldn’t have been.

Late that afternoon, feeling something wasn’t right, I called the hospital and they said to come in, but there was no rush.

When the doppler didn’t immediately pick up a heartbeat I knew then our baby had died. I remember screaming, such a deep scream.

We sat in shock as the staff gently explained what came next, I don’t remember details, it’s all hazy from the moment they told use we’d lost him. I didn’t sleep a wink, just cried and cried. I thought I’d never stop.

Initially I’d begged for a caesarean but they explained a natural delivery would be best for me and for future pregnancies.

They started the induction process and then we waited.

I was so desperate for the physical side to be over that they changed the drugs on Monday morning. At 5.30pm my waters were broken and Hamish was born at 8.54pm. They handed him to me, and Max cut the cord. He looked perfect, exactly the little boy I’d imagined in my head, lots of dark brown hair, chubby cheeks and my nose.

I cleaned him and dressed him and we spent four precious hours together. The midwives were wonderful, they took footprints, handprints and photographs, memories we really treasure.

I’m so glad I found the strength to hold Hamish and bathe him, so proud I went through labour, to have done it for my son.

We left hospital the following day and I spent weeks sitting, staring at the wall. Every four hours I’d look at the clock, almost like I was due to feed my baby. I’m told it’s called ‘empty arm syndrome’ and that was exactly it, I was a mother without a baby.

Desperate for answers, we had a post mortem and the results were heart-breaking. There was nothing wrong with our son, but my placenta had been failing for some time. Despite so many hospital visits, appointments and checks, his growth had clearly slowed down yet the warning signs hadn’t been picked up. Knowing we lost our son because people hadn’t done their jobs correctly is impossibly hard to bear.

There’s such a massive taboo about stillbirth and so many preventable deaths like Hamish. That’s why Tommy’s is so important. They don’t shy away from it, they put it out there, and conduct vital research that will save lives.

The law says your baby never lived unless it took a breath. Just one breath. Without it they don’t legally count.

However, to the woman carrying that child there’s someone missing every Christmas, every birthday, every day.

I was lucky enough to subsequently fall pregnant again but, though happy, all the innocence was gone. It was fraught from the beginning. I was in denial, too scared to hope. We’d talked about Hamish all the time; however, this time it was always ‘if she lives’.

Although I never dared believe we’d take a living baby home, I talked to her while I was pregnant, we gave her a name, Penelope. We wanted to feel like, if anything happened, we’d included her in things. We tried to make her part of life before she was even born.

Desperate for history not to repeat itself, we also researched endlessly and Max found Dr Heazell and the Tommy's Rainbow Clinic in Manchester.

Trust was a massive issue for us, so the experts at the Rainbow Clinic provided a huge amount of understanding and reassurance.

I was monitored regularly and due to low amniotic fluid and my anxiety, I had a caesarean at 36.5 weeks and Penelope was finally here. It was surreal, she had lots of hair, looked just like her brother. When I heard that first cry, I breathed a huge sigh of relief. 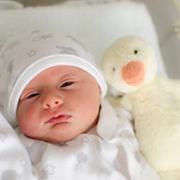 Seven months on, our daughter is doing really well and is an absolute joy. We’ll tell her all about her brother when the time is right.

Hamish will always be part of our family.

Max and I felt such guilt after losing Hamish. I felt my body had let him down. That guilt hasn’t gone away, but I accept that if I’d had the right information, especially with regard to monitoring movement and reporting any change, there’s a chance Hamish would still be alive.

I understand doctors and midwives don’t want to frighten people but women need to be well informed - it could save their baby’s life.

Read more from our Manchester clinics