This year Shane Finney took on the enormous challenge of completing 12 marathons in 12 months, aptly naming his challenge Shane's 12 in 12. This is his story and reason for running.

After completing a couple of marathons, including one for another charity. I decided I wanted to push myself further and try and complete a challenge that would be a step into the unknown.

I’d toyed with the idea of running 12 marathons in a 12 month period but wasn’t sure my body would be able to stand up to the rigours of such a programme so I left idea in a little box in my head, tucked away for a while.

It stayed there until the day when an incredible lady told me about how Tommy’s had been a really big help to her after her daughter had been born prematurely and died a few days later.

This story touched my heart and I went on to think about how anyone could be affected by premature birth, stillbirth and miscarriage. It was then that the crazy idea was reawakened.

I knew I had a reason to put myself through what I knew would be a long and tortuous 12 months, the memory of a baby that would push me through the darkest moments of the challenge I was going to undertake.

I then began to get a bit excited at the thought of doing something so demanding. I started to float the idea among friends and was usually greeted with a funny look and expressions along the lines of “you’re bonkers”!

With my affinity for Tommy’s entrenched and after shrugging off the friendly advice I had received, I set about planning what I was going to run and where.

When I began advertising my intent on social media, after which others began to tell me about how their lives had been touched by the aforementioned issues that Tommy’s plays such a vital role in researching and advising on.

I began the arduous task of finding different races at suitable times so I could fit my 12 marathons as well as training into my life.

The investment in terms of financial, time was going to be big but I was past the point of no return! Friends and work colleagues began to make donations before I had even got anywhere near the start line of race number one.

Eventually I had my itinerary. 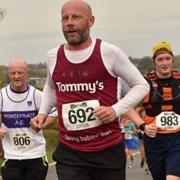 Either way I was bursting into tears! Every marathon has its low and high points and to multiply that by 12 over such a short space of time helps bring home to me the scale of the achievement.

Fortunately (touches wood immediately) I've never really been injury prone and always listened to my body but prior to the first marathon I was really struggling with a bad back and this would lead to a very definite low point.

Under normal circumstances I wouldn't have run at all, but I knew I couldn't let people down who had already donated to the cause. After 4 miles the back began to hurt and by mile 18 I could barely walk never mind run.

I spent 2 hours on a freezing December day hobbling the last 8 miles around a lake in the middle of nowhere, finishing close to darkness with just about everyone else packed up and gone!

Although I had no further proper injuries, apart from the odd niggles, the next few marathons went OK, although all of them had dark moments where I had to really dig deep both physically and mentally.

I had also managed to pick races in Milton Keynes, Stoke and Forest of Dean that were probably three of the hottest days I have ever known, and I saw countless casualties on my way round a few of the courses I ran which highlighted that one marathon in a lifetime is not to be taken lightly, never mind 12 in 12 months!

A definite highlight was being cheered on by Team Tommy’s at the Brighton Marathon which gave me a great boost, as well as the countless individuals who lifted me when I needed it in each of the marathons. A simple comment such as "fantastic cause" lifted me so much when I was struggling with body or mind.

For some reason known only to myself I decided to do the last 2 marathons on consecutive weekends. At the time this sounded like a great idea but as they got closer, so the sense of trepidation increased.

Marathon 11 in Chester went surprisingly well and was my fastest of the 12! The week building up the marathon 12 was full of nerves and fear, it was suddenly hitting me what I was about to do.

I was aware of the dangers, but I trusted myself and my body. The morning of the race in York, I hit another low. It was chucking it down and my phone told me that it would continue for the duration of the race!

I kept telling myself "one more then you're done!"  The conditions were soul destroying and I hated every step of the first 20 miles but with the end I dug again and found a smile, a spring and my sense of humour to get me to the end and cross that line.

The highs of crossing each of those 12 finishing lines are something I will never forget: the disbelief at what I had done, the aches and pains all worthwhile, the sense of joy all bubbling up into one big ball of emotion that I had no control over.

When it comes down to it, I would never have got anywhere near completing my challenge had it not been for Tommy's, the amazing cause and those they have touched!