Embarking upon the IVF process

Our story started in 2017 when we were told that our chances or having a child were very slim. At the time the news hit us hard and it was many months before we finally came around to discussing our options. Twelve months after being given the difficult news we decided to give IVF a try and following several consultations we finally started our treatment in July 2018. One month later we had a positive pregnancy test. We could not believe that we were expecting a baby and that the treatment was successful after only one attempt.

A much longed for pregnancy

The pregnancy was normal as morning sickness took over and the weeks passed. This was up until we had the 20-week scan in November. The scan showed our baby was healthy and after an hour we learnt that we were having a baby boy.

“As the scan concluded we went from feeling elated to deep anxiety as it was confirmed that my cervix was opening and there was a danger of pre-term labour.”

Two days after the 20-week scan we rushed to the hospital to the delivery unit and when arriving there were plans put in place to have an emergency stitch to close the cervix. However, tests were showing I had an infection, which escalated to sepsis. After two days in hospital on the 26th November 2018, our baby boy Ethan was born asleep at 21 weeks and 3 days. Our hearts were broken, and our lives changed forever.

Grieving the loss of our son

In the New Year of 2019, we grieved our son but also knew that for our own mental wellbeing we must take positive steps, so we set ourselves goals for the year ahead. The next few months were busy as we made career changes, bought a new car, and got engaged to be married. Next on the list was to move to a new house, and it was early in this process in August 2019 that we found out we were expecting our second child.

Whilst keeping busy we had avoided all conversations about IVF or family planning, so this was both unexpected and amazing news that blew us both away. We always expected that we would need to go through the IVF process again to have any chance of having a family.

This time around the pregnancy was much more stressful as we knew I had an incompetent cervix and I had been promised an operation to insert a cervical stitch. After 12 weeks when inserting the stitch, we found out that I also had a cervical polyp, which could cause complications as it appeared to be embedded in my womb. Time passed slowly throughout the pregnancy and we focused on getting through each week at a time, which we were able to do with the support of team at Tommy’s Rainbow Clinic at St. Mary’s Hospital in Manchester.

In December we had the 20 week scan and found out that we were expecting a baby girl and that she was fit and well, however once again it was clear that my cervix was opening and we were fully reliant on the stitch to stay in place.

My waters broke at 21 weeks and 5 days

During the pregnancy with Evie there were many similarities to our experience with Ethan, and one parallel was with dates and scans. At 21 weeks and 3 days, a year after losing our son on the same day, I started to bleed heavily. We rushed to hospital fearing the worst, but on review the bleeding was not serious and was a result of the polyp. I stayed in hospital under observation and things took a turn for the worse at 21 weeks and 5 days as my waters broke. We found out the likely cause was that the polyp had removed itself from my womb.

“With my waters broken we were taken to the delivery unit where we were being prepared for the loss of our second child.”

When we lost Ethan, we were made aware of the survival rates at 22 weeks, and we knew that the hospital would attempt to save a baby at 22 weeks if showing signs of life. When losing Ethan we had researched what steps to take in this situation, and we knew the importance of avoiding infection and that steroids could be vital in a babies fight for survival. Knowing this kept us positive and we had seen our healthy baby girl in the scans, and we believed she was strong enough to fight this with us.

We will always be grateful for the response of St Mary’s hospital, and after long discussions the NICU consultants agreed to do all they could to give us a fighting chance. I was given antibiotics to fight any infections, and at exactly 22 weeks I was given steroid injections. During this time, I remained in hospital on bed rest, with the stitch holding my cervix and preventing pre-term labour, however we knew this would not last long.

On Monday 23rd December 2019, at 22 weeks and 2 days, I felt contractions and the pain of the stitch pulling my cervix became unbearable. We knew that this was the point we needed to remove the stitch and once this happened, we knew our baby would be born. When the stitch was removed, I was already 4cm dilated and within 30 minutes Evie was born fighting.

We will never forget the moment when we saw her wriggling on the bed and the relief of saying out load “she’s breathing”. The midwife who delivered Evie was amazing as she kept her alive and hit the emergency buzzer for support from the NICU team. Quickly we could hear the running in the corridor and the room filled with doctors and nurses who all went about saving our little girl. This moment was as much surreal as it was scary, and it was 30 minutes before one of the doctors called my partner over to meet Evie and say hello. In an incubator they then took her away, but not without stopping by the side of my bed so I could see her.

It was not until 2 hours after Evie was born that we were told we could see her again, and we stepped into intensive care for the first time. Evie was tiny, weighing at only 487 grams, her eyes were fussed together, she had dark skin and was under a blue light.

“There were wires going in and coming out of her, and although she was so fragile all we could see was Evie’s strength and fight.“

We decided Evie’s name after she was born, and her name has the meaning ‘to live’. I am not sure if this is a normal reaction to Evie’s birth, but we were so happy. We had the miracle we hoped for and we were ready for the battle ahead.

Evie struggled as she dropped in weight to 412 grams and her undeveloped lungs meant she was on a ventilator. At 3 weeks old she became ill very quickly and we were called into the hospital overnight. We were told she had sepsis and for the first time we started to think she might not get through this and might not even make the next few hours. She was on 100% oxygen support and her heartrate was at 240bpm.

“That night we both sat with our hands holding Evie and as she squeezed our fingers, she opened her eyes for the first time. We never doubted our little miracle again as she told us she was ok.”

The weeks passed and we were more involved with Evie’s care, helping change her nappy, feed her (although through a tube), and change her bedding. We wanted to understand and learn everything the nurses were doing so we could be involved as much as possible. At 30 days old I held my baby girl for the first time, she was so tiny and could easily slide through the top of my jumper.  Her dad had to wait a little longer and it was 41 days before Evie was out of her incubator again.

At 10 weeks old Evie was diagnosed with aggressive retinopathy of prematurity, effecting the development of the blood vessels in her eyes. She had a procedure with injections in both eyes, which saved her sight early on. Today Evie continues to have her eyes reviewed, but she is improving, and we believe the biggest risk is that she may be short sighted and need glasses later in life

Life with a premature baby during a pandemic

On Mother’s Day weekend we were first impacted by the coronavirus pandemic. Evie was 11 weeks old and as I had a cough we had to self-isolate. We had spent every day caring for Evie in hospital and suddenly we were not able see her. Whilst we were in isolation Evie became very sick once again, and tests confirmed she had Group Strep B, which became septic and put her back on the ventilator. The nurses, doctors and consultants worked tirelessly, and Evie battled through meaning when we saw our baby again, she was feeling much better.

“Not seeing Evie when she was so sick was the toughest part of the journey and we were glad to be back by her side.”

Once Evie had recovered, she was moved to a local level 2 NICU, which gave greater focus on her development. The staff in the hospital took time to get to know her and they helped her with feeding as well as reducing her oxygen requirements and support. The time it took from Evie being transferred to the local NICU to going home was only 4 weeks, and we were surprised when discussions started about taking Evie home.

In total Evie spent 141 days in hospital, and most of that was in the intensive care room. She had ups and downs but never stopped fighting. In May 2020 she came home although still needing oxygen support, which we could monitor with regular community visits from the hospital to check in on us. After 2 months at home Evie came off oxygen altogether and the need for the community visits reduced.

Evie is 9 months old as I write this, and she is lay on her play mat doing all the things you would expect of a health full term baby. She is 14lb 1 ounce and this weekend has started to wean from milk to solid foods.

"Many people do not believe that 22-week babies can survive, but our baby is proof that if they are given a chance they can survive and thrive." 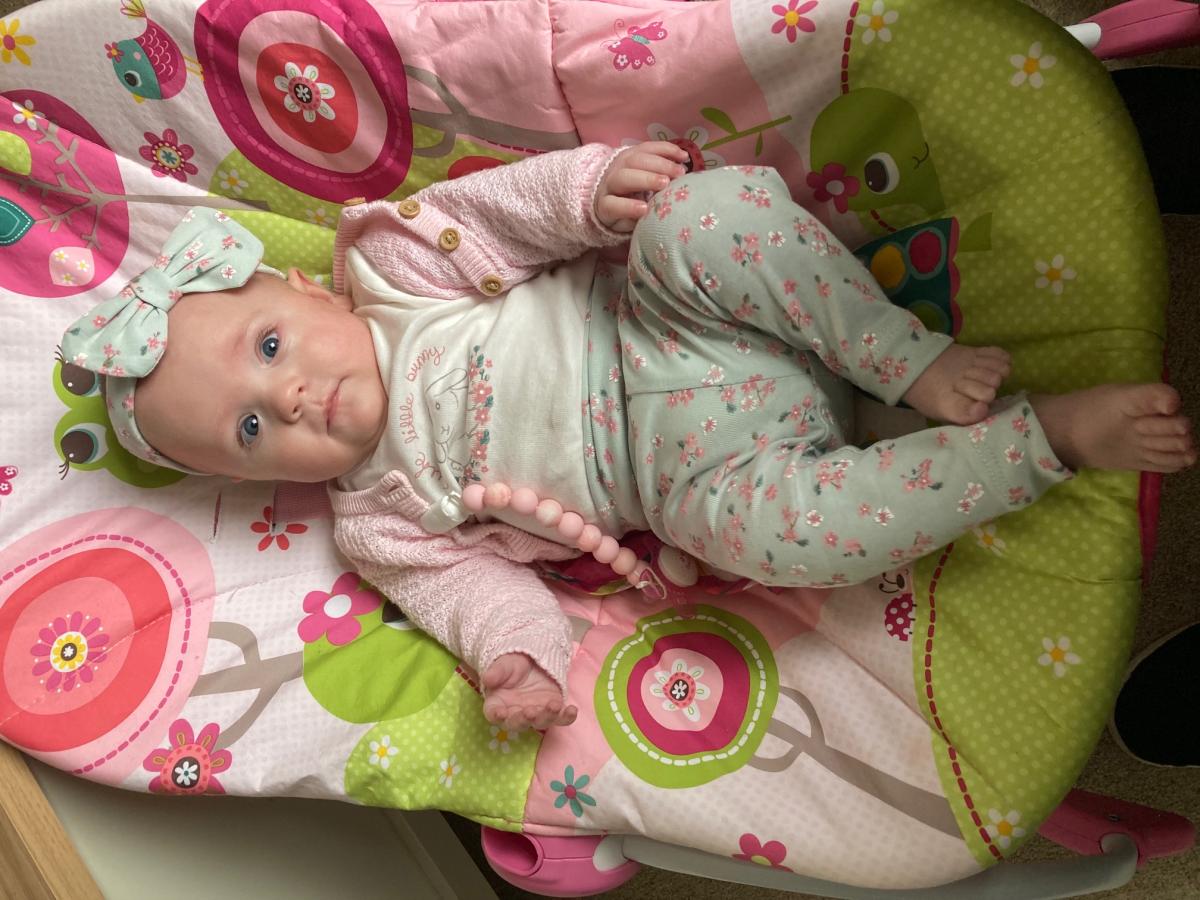