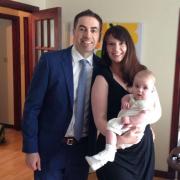 Being pregnant was just amazing. We were so thrilled and when my little one started moving at around 24 weeks it was just the best feeling in the world.

We had a private scan at 30 weeks which revealed we were going to have a little boy and we both wept with joy. Hardly able to contain our excitement, we went straight to Mothercare to buy baby clothes. We couldn’t stop talking about names for our boy and I’d often stand in his nursery, daydreaming about meeting him for the first time, how I would hold him, look into his eyes and tell him just how much I loved him. Unfortunately, the reality was very different.

At around 34 weeks I felt like he wasn’t moving as usual. I talked it through with friends and they reassured me, explaining that as baby gets bigger he has less room to manoeuvre which made sense, but as the week progressed I just felt more and more certain that something wasn’t right.

I did some research online and found the Kicks Count website which explained how to monitor baby’s movement and, from that point, I did. A week later I was worried enough to go to hospital where a lovely midwife hooked me up to a tracing machine and a scan showed our son was developing as normal.

I was admitted overnight for monitoring and the following morning a doctor explained that I had an anterior placenta which may have been acting as a cushion, making it more difficult for me to feel my baby’s kicks. With that knowledge I went home feeling more reassured.

A few days later, I went back to hospital for a follow-up appointment where a scan showed baby moving around. I did, however, explain my worries about reduced fetal movement to a consultant, but she was pretty dismissive.

I desperately tried to focus on work and put my fears to the back of my mind but the advice from Kicks Count made me feel more and more certain that something was not right.

I remember going to my Mum’s on the Saturday and she’d cooked a spicy soup. Our little one really jostled around as I tucked in, but it would be the last movement I’d feel for the next 24 hours.

I went back to the hospital where I felt, as a first-time mum, I’d been labelled, my concerns not taken seriously. One midwife actually asked me directly if I thought I was an anxious person.

However, they did hook me up to a tracing machine. The nurse immediately reassured me there was a heartbeat but 40 minutes later my baby hadn’t moved. We tried a different machine but, again, after 20 minutes, nothing.

I cannot describe my shock when the consultant came into the room and calmly explained our boy would have to be delivered within the next 45 minutes.

I remember saying, ‘I didn’t expect this’, my voice was so controlled when every feeling I was having was completely the opposite.

I was in pieces, and angry too that all my questions and fears, now justified, hadn’t been investigated.

Joshua arrived by emergency C-section and when they lifted him up so I could see him he was making some serious noise and wriggling, but as the doctor turned to take him for a check-up, he suddenly went silent, his tiny body floppy.

I could barely process what I was seeing as they placed a tube down his throat to help him breathe. They brought him back to me before rushing him off to the neo-natal ward and, as I stroked his arm the midwife moved my hand to his forehead, as if things looked so bad she wanted to make sure every second I had with him counted. I just couldn’t take it all in.

I was desperate to see him so, as soon as I was well enough, my husband wheeled me up to his ward. He looked so small, surrounded by wires, and I was devastated. This wasn’t how I’d imagined those first precious hours as a mother.

After five days at Aberdeen’s neo-natal unit, he was transferred to Glasgow’s York Hill for two weeks before going back to Aberdeen. I stayed with him throughout, only returning home once to collect some things we needed. I remember walking by his nursery and feeling so numb because he wasn’t there with me.

All together Joshua spent a month in the neo-natal unit due to an infection contracted in the womb. Even now we don’t know what it was, or what caused it which is so frustrating and a real worry because we want more children and fear the same thing could happen again.

When we were finally able to bring Joshua home I cried for the entire journey, overjoyed that we could finally be our family was finally together.

I’d tell any pregnant woman to be aware of fetal movement and, if you have any concerns, do not be afraid to keep asking questions. I believe the information from Kicks Count gave me the knowledge and confidence I needed to save my baby’s life.