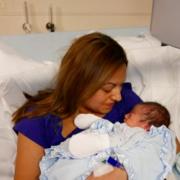 “Is it your first?” It’s a question I’ve been asked so many times by medical professionals and it really is a loaded one because, when the answer is ‘yes’ there’s that implication that your concerns, your fears, are irrational.

I repeatedly reported reduced fetal movement while pregnant and was left feeling dismissed, patronised, an inconvenience.

My baby had started moving at around 16 weeks and had a clear routine from the start, bouncing around as soon as I woke up, then really making his presence felt at breakfast time. Every couple of hours I’d feel that reassuring jolt or flutter.

Then, on January 21st, I realised he wasn’t moving as usual, the kicks were less powerful, less frequent and I felt scared.

I knew something was wrong, but when I arrived at maternity triage, that question again, ‘Is it your first?’ and I just knew I’d likely face that stereotype of over-anxious first-timer.

After 20 minutes on a CTG a midwife told me our baby was absolutely fine. They’re the experienced ones and I so wanted to trust them, but I wasn’t reassured. I also felt I couldn’t push it and left feeling frustrated with myself for failing to be firmer.

I felt I’d let my baby down because, although the machine said all was well, I was the one carrying him and I knew absolutely that there’d been a change.

I didn’t return to work beyond that point and I went for CTG monitoring twice daily which was gruelling, stressful and didn’t give me the reassurance I desperately needed. I was painfully aware that the CTG represented a snapshot, a moment in time, and I couldn’t shake my certainty that there was something off.

Four times I reported reduced movement yet, on each occasion, I’d be sent home, dismissed.

I felt so vulnerable, so scared because, if I didn’t push to have my concerns taken seriously, I could potentially lose my child.

I’d heard, through friends, of two women who’d lost babies at 39 weeks. Yet it felt that such emphasis was placed on getting baby to 40 weeks, such pressure.

You want to believe that everything is fine and you do start to doubt yourself even though you’re sure something isn’t right.

The fourth time I raised the issue of movement, the kicks were significantly less powerful and alarm bells started to ring.

I didn’t want to make a fuss but, ultimately, I knew that if something went wrong I’d feel like I’d failed my child, so I made the decision to trust my instincts.

On February 19th I was reviewed by three consultants at the maternity unit.

The first and second tried to reassure me, before being bleeped to go to theatre. Thankfully the third consultant listened. She read my notes thoroughly and then acted, immediately prescribing steroids for our baby’s lungs, then booking a C-section for the following week.

I can’t explain the relief at finally being taken seriously or the mixture of nerves and excitement at the thought of finally meeting our little one.

The most reassuring thing was the consultant making it clear that if I felt reduced movement between now and the C-section date, I could come in and they would deliver our baby immediately.

Nicolas arrived at 37 weeks and four days and I fell in love in an instant and flooded with relief that he was here, and he was safe.

You need to feel confident about those entrusted with your care. I’m a paediatric nurse, so I understand first-hand, the enormous time pressures healthcare staff face, but they must take that time to listen.

There needs to be more education for hospital staff on the importance of fetal movement, currently the messages are so mixed and it could, potentially, be costing lives.

I’d had a scan at 33 weeks and the report showed my baby’s growth had curtailed, but nobody told me. I can’t understand how that, coupled with my reported of reduced movement, didn’t raise questions.

Nicolas has had difficulty feeding since birth and, again, it’s only due to my instinct as a mother and my persistence that he has finally been referred to Great Ormond Street.

I don’t want other women to feel like I did, scared and conflicted. I’d tell any mum-to-be with concerns over fetal movement not to feel intimated or worry about wasting anyone’s time. It could save your baby’s life.

Most women aren’t medically trained, but they are the one’s carrying their child which makes them the experts on their baby.

I’ve since learned that one in three mothers who suffer stillbirth realised there had been a change in their fetal movement patterns. I can’t help thinking that, if I hadn’t stood my ground, I could, potentially, have lost my son.