By Aimee Rigby and Stuart Amos

Tommy's helped us enormously when we were expecting Harry. After George died, having been born prematurely, and suffering other second trimester miscarriages, we were lucky enough to be put under the care of Professor Andrew Shennan at Guy’s and St Thomas' hospital in London.

However, on September 29 2014 our lives were turned upside down when our son was stillborn at full term. This was not the first time we have had to deal with the grief of losing a baby, but this time we were three days away from a planned C-section when we found out that our son’s heart had stopped beating. Harry suffered a sudden and very rare condition that arose randomly out of nowhere, and he was born sleeping, weighing a healthy 8lbs.

Whilst trying to process what happened, we've often discussed the important part that Professor Shennan and the team at St Thomas' Hospital played, in making it possible for us to get to a full term pregnancy, even though the outcome was ultimately so tragic. Losing Harry has been one of the hardest things we've had to face.

We now have a son called Bertie Reginald Amos and he's two weeks old today, its flown by!

Bertie had a bit of a false start; about 30 minutes after he was born, he was taken to NICU because he had fluid on his lungs and hyperglycemia. He only spent 24 hours there before being transferred to the Special Baby Care Unit, and another 24 hours later he was back with us.

The night we took him home, he cried all night and wasn't quite right, so we took him to our local hospital and he spent a few days there with jaundice and on a hot cot. After spending a full week in hospital, we finally got to take him home.

Bertie's now putting on weight, and is nearly back up to his birth weight, which is great because he lost a lot in that first week. He's constantly keeping us up at night, and always makes nappy changing time interesting for us. We're absolutely loving our new family life.

Both of us have commented several times that the experiences we've had at St Thomas', in terms of the treatment, care, communication, consistency, and the speed at which important decisions were made, is second to none.

We're determined to use Harry's memory in a positive way 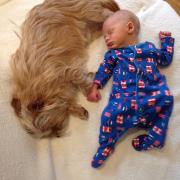 The fundraising and research done by Tommy’s gave us a lifeline to get to a full term healthy baby, but there's still so much more to be done. Every year 4,000 babies are stillborn in the UK, that's one baby in every 200 or 11 babies every single day. That makes it 15 times more common than cot death, and these deaths largely can't be explained.

Tommy's are undertaking research projects, so that one day these statistics can be improved, and families such as ours don't have to go through the unbearable loss of a baby in this way.

Since we lost Harry in 2014, we've been fundraising for Tommy's and have now raised over £6,000, and still going strong! Stuart will be running the London Marathon for Tommy's in April, as long as he gets some sleep! We’ll continue to raise money for this wonderful charity for as long as we can, not only in memory of Harry, but as a thank you for the wonderful care we've received.