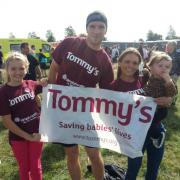 Over the last 11 years we have suffered the repeated trauma of recurrent miscarriage. All I have ever wanted is to have children but none of my pregnancies lasted longer than 10 weeks.Test after test gave us the same answer: “it’s just one of those things and you will get pregnant” in other words "we have no idea what is wrong with you."

After 9 miscarriages we decided to seek some help. As our local hospital didn’t “specialise “in re-current miscarriages, I found a top consultant based at St Marys in London and asked my GP to refer me.

We had three appointments, consisting of new tests, blood tests and scans, the results all came back fine. My only issues were low blood pressure and chronic psoriasis, I am also very petite. They said that this wasn't a problem, however I'm still to this day convinced that it played some part.

There was one last thing the consultant wanted to try; she was convinced that something was wrong with my uterus, so I was booked in for day surgery to have a hysteroscopy and laparoscopy. They found I had a septum in my uterus the shape of a heart along with some cysts; which they burnt away. I was then put on medication for a month to re- establish my hormones.

When we went back for a check-up she was convinced that it was the septum that had been the problem. I remember her saying: “I’ll see you back here when you get your positive pregnancy test.”

We fell pregnant soon after this  and were over the moon, we felt sure that this little bean would stick.

How wrong were we. I had some bleeding and contacted the early pregnancy clinic and was told to come down, nothing seemed abnormal and the bleed stopped. We went back over the course of two weeks for scans, our last scan came when our little bean hadn’t grown for 2 weeks. The sonographer knew our past experiences and was a nice as she could have possibly been; we were ushered into a room where our whole world collapsed for the 10th time.

We were asked if we wanted to speak with a doctor on duty, but we knew what they would say; we knew there was nothing they could do for us. We left with nothing but sadness. I chose to have the medication that would simulate the miscarriage. My previous miscarriages happened naturally so I knew each time it was happening.

They gave me a bag full of pads, pills and pain relief as I wanted to do it at home rather than in the hospital. I had suffered badly with pain in my previous miscarriages and came home prepared for the worst. The evening came and all I had going through my head was I was killing our baby, I was scared, I was crying, my body went into shock. It was bad but I got through the pain.

It's now been a year since our last positive pregnancy test and we’ve decided not to try any more.

My body physically cannot take any more and we are both emotionally drained. We have experienced more pain in 11 years than most couples do in a lifetime.

Whilst it hurts that my brother and sisters all have children, I’m so happy that I have my niece’s and nephew’s. They have given me strength, joy and love, and so much to look forward to.

I am a step mum to a 13 year old, and she is amazing and is at that age where she knows now what we have been through and understands that she will be an only child.

If you know anyone that is going through this, please remember that just because the hours, days, months and years pass their grief doesn’t. That wanting and needing feeling never goes away. I will never have that first flutter or kick, or experience a scan where there isn’t bad news looming. Most people moan about being pregnant, but I would grab that chance in a second.

Seeing someone you know is pregnant is the hardest.Unless you have been through a pregnancy loss you will have no idea how the grieving mother/father feels.

I’m not afraid to talk about my miscarriages and will not hold back in raising awareness and every way I can. I found Netmums forum this time around and I’m glad I did, it got me through some hard times.

I may not have any living children but I am a mummy to 10 beautiful angels.