When I became pregnant in February 2011, it was a surprise, but we were very happy. Everything was going well. At our 20-week scan, we found we were having a baby girl. We were delighted and very excited.

A few days after my scan, I started to bleed lightly. I rushed to the hospital and a doctor told me that I had gone into preterm labour. I’d been aware of the possibility of miscarriage but when I’d passed the 12-week mark I thought I’d be safe; nobody talks about late miscarriage.

It was a very long and painful night. The following day I delivered my little girl. She was born still in her sac, it was amazing. Sadly, she didn’t survive; she was far too little.

At that point I wasn’t angry, I didn’t cry, I just needed to get through it. We took lots of photos. I unwrapped her blanket because I wanted to remember every part of her and the feeling of her skin against mine. We named our daughter Sapphire-Rae. She was beautiful.

Leaving without my baby

As I left the hospital, it started to sink in. My round tummy was still there, and my milk was coming in. I felt like I was leaving my baby behind.

I took a few months off work to try and deal with my emotions after such a traumatic time. When I went back, some people asked how my baby was and I just told them that she was fine, I didn’t know what else to do. How could I tell them she’d passed? I didn’t want to spoil their day.

In those first months the gym was my saviour, I’d just run and run to clear my mind into a world of nothingness.

At the beginning of 2017, I became pregnant again. It happened very quickly, and I felt really positive about it even though I was aware of what could go wrong.

I asked my doctor for a cervical stitch as I knew that I had gone into premature labour during my first pregnancy because my cervix was weak. I’d read that a stitch could be inserted to strengthen a cervix and help to keep it closed during pregnancy. However, doctors at my local hospital refused. I didn’t know what to do. I tried to rest as much as I could and felt incredibly anxious that it would all go wrong again.

In May, I went for a scan and they found my baby’s head was engaged. I was going into early labour again. The sonographer’s face told me it wasn’t going to end well. That afternoon, I had a stitch inserted to try and slow down the process.

Two weeks later, I was admitted to hospital and put on bed rest. At 23 weeks I sneezed one night, and my waters broke, I was going into labour again. I felt so much anger. I couldn’t believe it was happening again. My daughter came out perfectly healthy. We called her Isabella-Rae which means ‘God is perfection’.

I’d miscarried a healthy child because nobody listened. The first time was a deep, dark sadness but, this time, just rage. I’ve never been so angry in my life.

I didn’t know where to turn and spent a long time researching my options. I couldn’t face losing another baby and wanted to find someone who could help me.

After hours of research, I decided the best person to speak to was Professor Andrew Shennan who runs the Tommy’s Preterm Surveillance Clinic at Guy’s and St Thomas’ Hospital.

I asked to be referred and 2 weeks later I got an appointment letter. A month after losing my second daughter I met Professor Shennan. He agreed that my stitch had been put in far too late. He was the first person to listen to me.

Professor Shennan took his time to explain everything to me. He described the different types of stitches available and outlined the things that could go wrong with the procedure, but he didn’t focus on the negative. He assured me that, with the right help, I would be able to have a living child. I walked out in awe.

I fell pregnant later that year and had a high stitch inserted at 10 weeks. I had very regular scans at the clinic and got to know the whole team, the sonographers, consultants, midwives and they were all amazing. I didn’t ask to read my notes once, I didn’t need to, everyone was so competent I didn’t worry or question anything.

At 37 weeks, after an anxious 8 months, I had my stitch removed and gave birth a week later. I had absolute confidence in the Tommy’s team and felt totally supported by everyone from the consultants to the research midwives. At no point did I fear for my child, I knew we were in good hands.

“Tommy’s gave me my child and they gave me hope. I’d got to a point where I thought I’d never be a mother, nobody was listening. It was a lonely place. Tommy’s made me feel safe and supported and we are eternally grateful.” 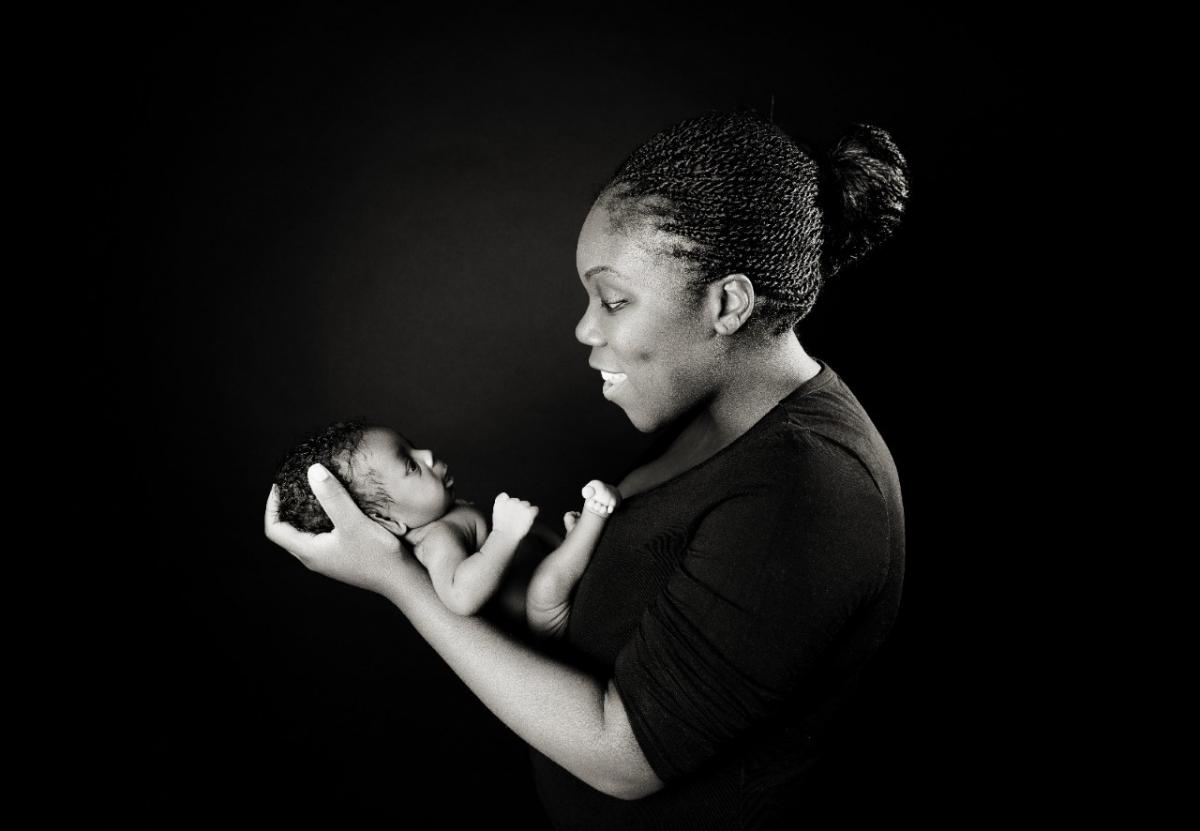 Being cared for Tommy's during my next pregnancy

When I fell pregnant again, I went back to the Tommy's London clinic. Having a baby during lockdown was a strange experience and definitely difficult at times – from not being able to attend appointments with anyone because of the pandemic and lack of child care, to learning to breathe whilst heavily pregnant with with a mask.

Thankfully, Prof Shennan and his team at the Preterm clinic were very reassuring, and knowing I had their support throughout my pregnancy made it easier to cope with any anxiety I was feeling.

I was incredibly grateful that Prof Shennan was not only on hand to talk me through the procedure, but also to place and remove my stitch. This was my second cervical cerclage but with an extremetly energetic toddler at home, I was eager to make my pregnancy as secure as possible! He sat me down and drew diagrams to illustrate how he would place my stitch higher than my previous one, and how it would remove the need for an abdominal cerclage.

Ayélé-Tia arrived 2 days before her due date

9 months later, my cervix was still very secure – and 10 years on from the loss of my first little girl, Ayélé-Tia arrived within an hour of my waters breaking at home. I couldn't believe that she arrived 2 days before her due date; this was my longest pregnancy yet and something I had never imagined to be possible.

Thank you, Tommy's, for all the work and research you continue to do. 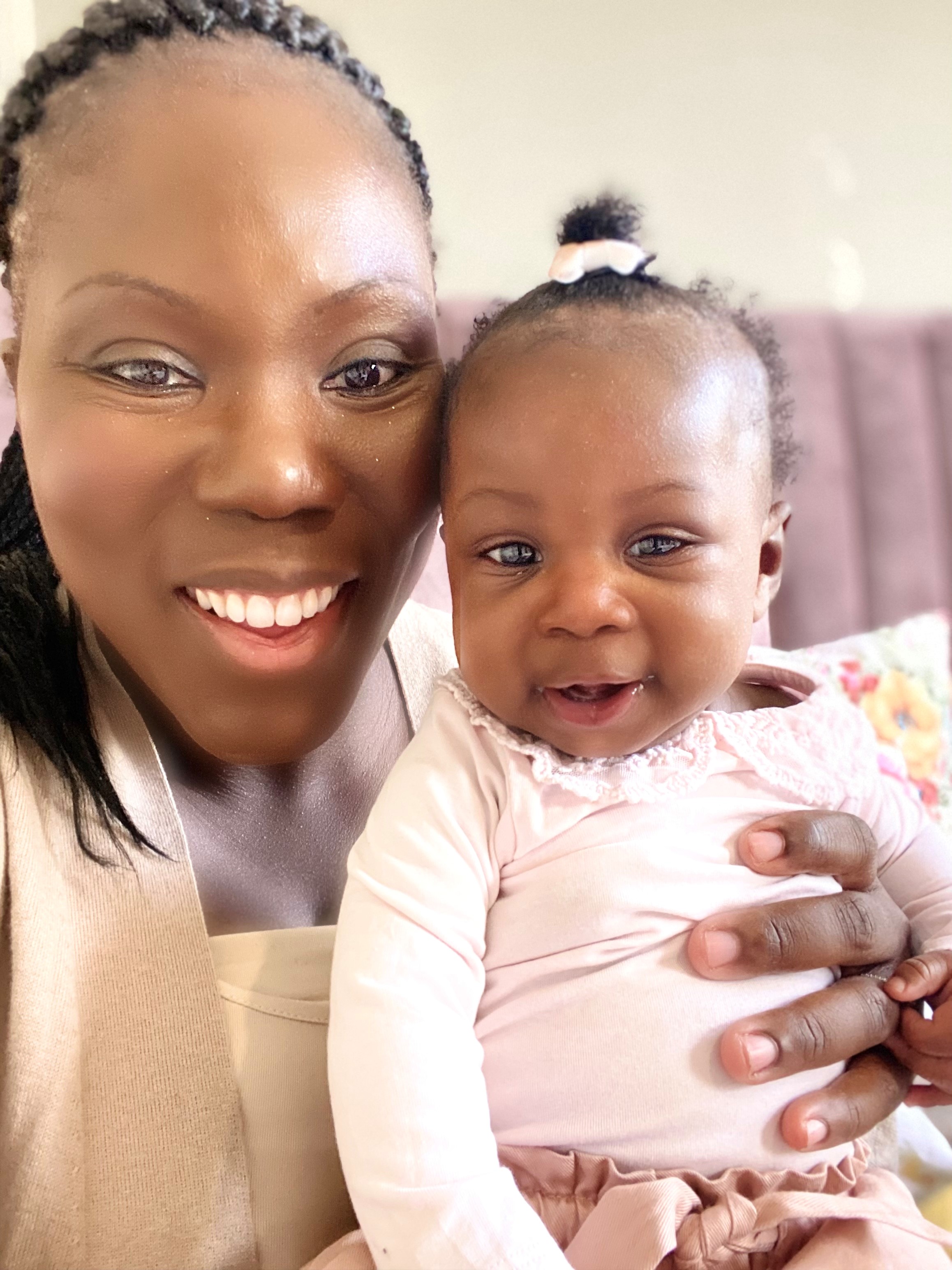