Pre-eclampsia is a condition that affects two to eight in 100 women.

Most cases of pre-eclampsia are mild and may have no effect on the pregnancy. If left untreated,  however, pre-eclampsia can be dangerous for both mother and baby.

After a text book pregnancy, Kate Crussell was shocked to hear that she was suffering from severe pre-eclampsia and her baby boy would have to be delivered straight away.

Kate and her husband Rob are now using their experience to raise money and awareness of pre-eclampsia and baby loss.

For as long as I could remember the one thing I wanted in life was to be married and have children, so when Rob and I discovered that we were excepting we couldn't have been happier.

I loved being pregnant knowing that inside was a beautiful little baby, I had a text-book pregnancy, the excitement was building as we had decided not to find out the sex.

Making it 39 weeks pregnant we thought nothing bad could happen at such a late stage and that as I'd had no problems and all my pre-natal meetings were fine.

On Monday 3 August I had a midwife appointment, I listened to the baby's heartbeat and all seemed OK.

She tested my urine and said I had a trace of protein but said that this is normal for this stage of the pregnancy, however once I had left the appointment I went in to Dr Google mode which said protein in the urine could be a sign of pre-eclampsia to be honest I really didn't think that much into it as the midwife had said it was normal at this stage.

On Wednesday 5 August I had a really bad headache, I tried everything to shift it but nothing would work, the baby had been moving but not as normal it was more a jerky kind of movement.

After chatting with Rob I decided to call the midwife unit. I explained about how I was feeling and they said for us to come down. This was about 10pm, all I had in my head was the pre-eclampsia I had been looking at earlier in the week.

After a little wait, we were seen. I had my blood pressure taken several times, looking back now its because they couldn't believe the readings they were getting for someone that appeared to look so well, in fact I got up and walked across the labour ward into another bed which they couldn't believe.

I really didn't think anything was wrong, then suddenly they were a lot of people in the room asking a lot of questions, when we asked what was going on they said I had very severe pre-eclampsia and it was said that the baby would need to come straight away.

Sheer panic set in and I got really upset as I was so worried about the baby, not really fully understanding what pre-eclampsia was. I didn't even think that there could actually be something wrong with me, suddenly I was being put into a gown and cannula's were being inserted, into both wrists, elbow and my foot.

It took a while for them to insert a cannula in my wrist, I later found out it was because my veins had started to shut down, I was just wishing they would get on with it and get our baby out!

It was then decided I would need a general as this would be quicker - which was my worst nightmare. I was wheeled down to the surgery and I said goodbye to Rob.

They initially tried to put me to sleep but my cannula had tissued so they had to try somewhere else, all the time I could hear the baby's heart rate dropping, I just wanted this nightmare to be over!!

The next thing I remember is waking up to a nurse and asking what I had, she said it was a boy and your husband has named him Theo. I was so pleased, next I remember Mum and Rob being over me and I asked if he was OK, and mum told me he was really poorly.

Once I finally came around it was explained that Theo has stopping breathing inside of me, as my blood pressure was so high that this had been forcing the body to pump the blood to him.

Once I was in hospital, before they could deliver Theo safely they needed to bring my blood pressure down as I was extremely close to having fits and a possible stroke, something I didn't realise at the time, as they brought it down, this in turn then cut the supply to Theo.

They had to resuscitate Theo for 35 minutes before they finally found a heartbeat.

Thankfully the consultant was on call so therefore needed to make her way into hospital if she had been in, they would have stopped after 15 minutes meaning we wouldn't have met out baby boy alive.

Once they found a heartbeat he was whisked off to the Neonatal ward. As Theo had stopped breathing for such a long time he suffered a massive brain injury and he probably wouldn't survive if he did then he would be severely brain damaged.

They actually discovered that he could breathe by himself when he came down to the ward when I met him and have a cuddle at about 5 hours old.

He managed to live for 44 beautiful hours, where we got the opportunity to change him, bathe him and see his ridiculously long toes and to spend some time with immediate family meeting and saying goodbye to our baby.

I stayed in hospital for a week after Theo was born as I was so poorly, I had to have 24 hour midwife care for some of this time and was on a magnesium sulfate drip for the prevention of seizures.

Going through this type trauma has left me feeling extremely anxious, still even to this day.

It breaks my heart that up until this point Theo was a healthy baby boy and it was just this horrible disease that killed him. All the signs of pre-eclampsia are unfortunately also normal pregnancy related problems, such as swelling of the feet, face and hands, headaches, pains just above the ribs and vision problems.

My blood pressure had been normal on the Monday when it was checked and its scary to think that something like this can literally spike within days.

I was told that I was lucky to be alive, if I hadn't gone in that night I would have passed away in my sleep - this is something that changes you as a person and something that even today I really struggle with.

Once you have had a miscarriage, stillbirth or neonatal death the joy in subsequent pregnancies is diminished. The innocence is gone, you realise that death can happen and the fact that you might not be able to take your baby home.

Being pregnant was something I loved so much, and now I dread the thought of future pregnancies knowing that there's a chance that it could happen again.

My message to any expectant mums out there is to be aware of what is happening with your body and to always trust your instincts, if something doesn't feel right get straight down to the midwife unit. Please please never listen to people telling you what you should be feeling, it's your body you know what is right for you and your baby.

The long term dream would be that there are more scans offered in pregnancies, especially in women's first pregnancies as you don't know how your body will react. Neither my mum or sister had pre-eclampsia so I was classed as low risk.

I think all first pregnancies should be treated as high risk until a base line is established for that woman. I was told that Theo had been struggling for a couple of weeks and he had stopped growing (he was only a tiny 4lb 15oz of perfection when he was born - again all my measurements had been normal) if I had been treated as high risk and if I had a scan later on in my pregnancy - in the third trimester then Theo could still be here today. 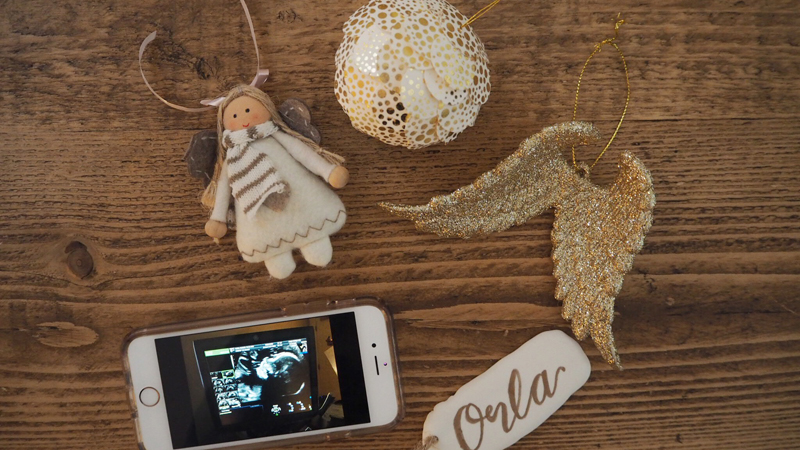 I don't think most people truly understand how much is lost when a baby dies. You don't just lose a baby, you also lose the 1, 2, 10 and 16 year old they would have become. You lose Christmas mornings, loose teeth and first days of school. You just lose it all.

Not knowing what Theo would have been like as he grew up is just sometimes just to hard to even think about. It's true that when you lose a child, you are haunted with a lifetime of wonder.

I do believe that I am the lucky one, the lucky one that knew Theo, who carried him and whose life will now be divided into a before and after because of him.

One thing I do know about our baby boy was he was an incredibly strong little fighter, something his mummy and daddy are still learning to do.

We will keep fighting to keep Theo's memory going in a hope that it will help someone else.

Pre-eclampsia affects two - eight in every 100 women. To see what Tommy's is doing to prevent it, read about our PEACHES trial with is working to find out how high blood pressure before pregnancy can lead to complications.

For more information about pre-eclampsia and its symptoms, take a look at our information page here.