Tommy’s supporter Niamh Corrigan’s life was tragically taken in a road accident in 2015. Since her death, friends and family have raised enough money to run a Tommy’s Research Clinic in her name.

The clinic is used for research into miscarriage, premature birth and pre-eclampsia.

Doctors are currently carrying out research to see what effect pregnancy has on the mother's heart in the early stages and see what this can tell us about the pregnancy outcome.

Dr Mara Al-Memar, a Tommy's PhD student working at our Imperial Clinic, told us how much the team appreciate this support.

'We are very grateful for the funds raised by Niamh’s friends and family towards Tommy’s. This has been a great contribution to our miscarriage research. We hope through this that we will make breakthroughs in pregnancy loss research and improve the care of couples who are suffering.'

Niamh's friends and family have taken on various fundraising initiatives, from skydiving to hiking. In just over one month, Kay Williams will be taking on the London Marathon to help raise more money in Niamh's honour.

Kay's sister Alison told us that Kay has never run a marathon before and rarely exercises... 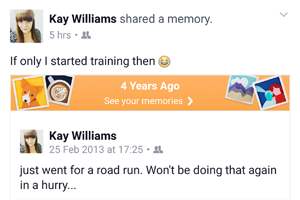 ...this Facebook status sums up Kay's 'dedication to fitness' well according to her sister!

We asked Alison to tell us more about where Kay's dedication to do the London Marathon has come from.

Why Kay is taking on this challenge

Our best friend Niamh was 29 when she lost her life in a road accident whilst on holiday in Thailand in December 2015.

Her absence in our lives is palpable, she was the hub of the group, always full of life, always laughing and always organising our next days and nights out.

She loved to socialise, to read, to travel, dance and shop and was looking forward to so much when she was cruelly taken.

To say we miss her is an understatement.

Niamh had done some training as a midwife earlier on in her career and absolutely loved babies and children.

Tommy’s was a charity that she had regularly supported and so it seemed the logical choice of charity to continue donating to in her memory.

In the first few months after Niamh’s death her colleagues started a fundraising page.

To date this page has had 173 donations and raised a staggering £183,791, allowing Tommy’s to open a research centre in West London in her memory.

It is here that Professors are able to conduct life saving research to better understand what causes miscarriage and to find out what steps can be taken to help prevent it. 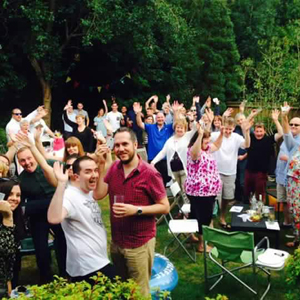 The money raised over the last year is an absolute testament to how much Niamh was loved and is now missed. There have been skydives, a three peaks challenge a fundraising garden party and now Kay’s marathon.

I’m not exaggerating much when I say that up until about a year ago Kay had never really exercised before. Ever.

And so no one was more surprised than we were when she announced last June that she had been accepted to run 26.2 miles in the London marathon for Tommy’s.

The progress Kay has made is absolutely incredible and her dedication is inspiring. Little over 6 months ago she was downloading the ‘Couch to 5k’ app and now she regularly runs over 20 miles a week.

There have been blisters and strains and numerous times when she’s wanted to do absolutely anything other than to put those trainers on and pound the streets, but she’s never given up or been defeated and we are unbelievably proud.

…but there is no doubt in our minds that she will do herself and Niamh and Tommy’s justice and we can’t wait to cheer her on the whole way around.

If you have been touched by this story and want to a make donation to support the Niamh Corrigan Clinic in West London by sponsoring Kay, you can do so here.

Niamh's friends and family are also running a fabulous Christmas Winter Wonderland to raise money for the clinic! Read more and book your tickets here!