On Sunday 29th July 2018 Richard and his son Nathan took part in the Prudential RideLondon-Surrey in memory of Sophie. This is Richard's story and reason for riding.

Unfortunately when I did the Ride London in 2016 I only managed to do 92 miles due to delays and I have always wanted to go back and complete it properly. So this year I went back to complete the 100 miles and I did it this time round with my son Nathan. When I did the ride in 2016 it was on what would have been Sophie’s 3rd birthday and this year it will be a few days before her 5th birthday. Sophie’s birthday is always an emotional time for us but being able to do something for Sophie in her memory is so special.

Sophie was born 13 weeks premature on the 31st July 2013 on our family holiday in Snowdonia. My wife’s waters broke during the holiday and I remember thinking ‘What that can’t be right you’re not due until November !’, I thought she was being silly at the time. But we rushed to the Hospital in Snowdonia where my wife gave birth to Sophie and sadly she lost her battle 7 hours later. We were stranded in this hospital (as I am unable to drive) miles from our remote holiday cottage devastated and heartbroken. What came after was one struggle after another and I still struggle with it now. You go through all of the emotion of a pregnancy to come out the end with nothing. I found it incredibly hard but I can’t imagine how hard it must have been for my wife just to lose her like that after all the emotions of carrying her through the pregnancy and the excitement. 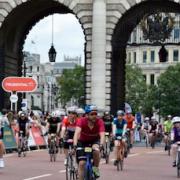 I decided to fundraise for Tommy’s when I decided to do the Ride London 100. Their cause is so in line with everything we went through and I could think of no better charity than Tommy’s to fundraise for. I had never been into cycling that much but when I followed the Tour De France in Yorkshire in 2014 and the following year the Tour de Yorkshire, I turned to my son and suggested we should do the Ride London 100, the route of the 2012 Olympic Road Race. Unfortunately my son Nathan was too young to enter in 2016 but with it being the exact date of Sophie’s birthday I knew I had to go it alone.

I never thought I could make my son proud of me until I did the Ride London 100. Nathan and my wife supported me every step of the way. My wife spent a whole day baking cakes for a cake sale at work to raise additional funds. I remember when I got stuck due to delays I called them and I remember my son shouting encouragement down the phone saying ‘Go on Dad You can do it Dad go on!!!’. When I crossed the line my wife and I just broke into tears, it was so emotional doing such a big challenge in memory of our daughter.

Nathan wanted to do the Ride London ever since I took part in 2016. He said it was a challenge he could not resist. Doing it together was amazing; having a training partner made the experience ten times better and even more because it was my son! I couldn't wait to get out there and complete the full 100 miles with Nathan.

Having trained since Easter in glorious sunshine and at times very warm temperatures, I began to realise during the week leading up to the ride that I was going to get wet!! It was an early rise from our Central London Hotel but an easy 5 mile ride to the start line in the Olympic Park as a warm up.  Amazing how lively London is at 6am and it was dry.  We followed other cyclists to the start and got in our wave queue just as the first drops of rain fell.  It was a wait of about 90 minutes but that soon passes as we slowly shuffle through the Park and in no time at all my son and I were getting on the bikes listening to the countdown and then our start music of Journey, Don’t Stop Believing (never a truer line).

At this point the rain did start and the wind was blowing strong and the cycle into London was tough but then we started to see people stood at the side of the road as we get nearer Central London and we realised they were there to watch us. There were people dotted all along the route clapping and cheering as we went past.  A stand out was a girl on Chiswick Bridge with a cardboard sign “ I came in my pyjamas to watch this!” (And she had!).  That raised the spirits among the cyclists.   As the ride went on through the wind and rain the crowds built and as we came into the towns and villages we could hear music playing either by a DJ or a live band as they all entered the party spirit.  The atmosphere was brilliant all the way round despite the weather in places like Kingston (twice), Weybridge, West Byfleet, Westcott, Dorking, Leatherhead and Wimbledon. The crowds seemed to be clapping and cheering constantly and the support for Tommy’s all round was immense when people spotted the jersey.  Plenty of support too at the cheer station in Kingston twice which was a welcome landmark. The countryside was beautiful especially the climb of Box Hill.  I remembered the band at the bottom of Box Hill from two years ago and you can hear them as you climb steadily up the hill.

It was a tough ride due to the conditions this year but having done the training properly we were able to complete the route although it was reduced to 97 miles for us on the day.  The rain did finally relent with about eight miles to go and the Houses of Parliament were greeted with joy as we knew we were nearly there.  As for cycling down the Mall with the atmosphere and everyone banging the boards well that was worth the effort and of course the medal will be cherished once more. Crossing the line alongside my son will be a cherished memory for all of us as my wife was at the line to film us crossing the finish line.

I would recommend taking a charity place with Tommy’s for Ride London as it really is an unforgettable experience and you are raising money for a worthwhile cause. It is important to put in the required training beforehand though to ensure that mentally and physically you are in the best position to complete the course.  I only took up road cycling two and a half years ago and really love it.  So my advice to everyone reading this is to sign up with Tommy’s get on your bike and enjoy the ride and you never know it might not rain too.

In 2016 I raised over £1,900 for Tommy’s which I am hugely proud of and this year between Nathan and we managed to raise over £1200. 1 in 4 pregnancies in the UK end in premature birth, stillbirth or miscarriage and often (as in our case) there is no reason why, just the memories and the questions which never go away. It is something that you never really think will happen to you, until it does. I strongly believe that at least one good thing can come out of anything. Cycling has kept me much fitter than I was before and I have managed to do things I would never even have dreamed of. To be an inspiration to my own son is something I never thought possible. We are so proud of each other and I just know that Sophie will be proud of us all too.