On Sunday 14th October 2018 Sarah took on the Manchester Half Marathon. This is her story and her reason for running.

Nearly ten years ago my husband and I welcomed my daughter into the world. So, when we decided to try for a second child three years later, we naively didn’t expect any trouble.

How wrong we were.

Over a 6-year period, my husband and I have lost 5 babies. Basically, one a year until we made the devastating decision to stop trying.

My experiences have been different almost every time as I have lost babies at various stages of pregnancy. I have waited in the longest, deafening silence whilst being scanned to be told that no heartbeat could be detected. In more thoughtful hospitals I have been ushered into a side room to wait to see a consultant. In less thoughtful ones I have had to walk, tearful and blotchy faced, through a waiting room full of perspective parents all clutching their Bounty wallets containing their notes, looking at me with pity and fear. I have heard my baby, the one that I’d had midwife appointments about; the one that I had changed my diet and routine for, be described in clinical, medical terms not as a baby but as products of conception.

With each miscarriage I have felt angry; at myself, at fate, at the medical profession. I’ve been lonely as I felt that people didn’t understand or want to hear about how I felt, and I have felt ashamed and for not being able to bounce back and for wanting time to stop just to give me chance to catch my breath.

Looking back now I realise that my experiences have taught me some valuable lessons. That strength does not have to mean silence; being brave can involve tears and that these babies are chapters of my story. I have realised that as with any story, it can be interpreted in different ways and I DO have control over that. 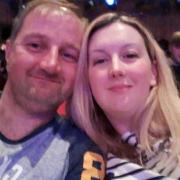 This year I decided that there have been enough negatives to come out of the whole experience; it’s time to make a positive.

Which leads me to signing up for a half marathon and raising money for Tommy’s. I’m not a runner and I won’t be running every step, but I will finish it, sciatica or not.

So why Tommy’s? No one mentioned Tommy’s to me after any of my miscarriages. In fact, it was only mentioned to me after I’d had tests to see if there was a reason for my recurrent miscarriages. A Dr suggested seeing if there were any medical trials that I could take part in. Looking back, I think that this is appalling. The attitude seemed to be to patch you up, to sort you out medically and then to send you on your way to try to make sense of what had happened to you and to carry on as if the pregnancy had never happened. So, when I first got my place in the Manchester Half Marathon, I was torn between finding a charity that supports parents who have lost babies and one that does research into trying to prevent miscarriage. Tommy’s does both. It’s so important to support people who have endured baby loss.1 in 4 pregnancies end in miscarriage, which is a frightening statistic. The whole experience can be very lonely, which is surprising considering how many people must go through it. I know with my first two that I felt that I shouldn’t talk about it as people just don’t. It is still, disappointingly, a taboo subject. Since then I have tried to talk about my experiences in the hope that it may help someone else who is suffering and bring me some comfort.

I’d gone from being a parent; adapting my diet, taking vitamins, thinking about where my baby will be born to suddenly being in a situation where there is no baby anymore. No scan picture to take home, no death certificate, no gravestone. Nothing to mark my loss. That’s why I feel that having a charity like Tommy’s & people to talk to is so important. It allows you to grieve. I hope that my run will do some good and help people in this terrible situation and hopefully even prevent other people from losing their babies. 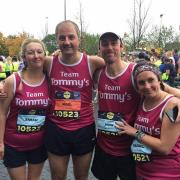 However, the poignancy of it being during Baby Loss Awareness week was not lost on us. The documentaries and stories that we have seen and read online have just brought home why this was such an important thing to do.

The support from Tommy’s has been immense. I have had so much encouragement via email from Team Tommy’s before and after the race. Plus, it was so lovely as I was making my way around the course to hear complete strangers shout, “Team Tommy’s” and my name in moral support.

So many people kept shouting what an important charity and cause it was. It is! I have had so many important and meaningful conversations during this process. People that I spend most days with have commented that they had no idea what we had been through and people who I have known for years have opened up about their own miscarriages.

I am proud of the money we have raised and I am equally proud of the conversations that we have had. This whole experience has taught me that it is so important to keep talking about baby loss and to break that taboo.

To join Sarah at the Manchester Half Marathon then please click here.