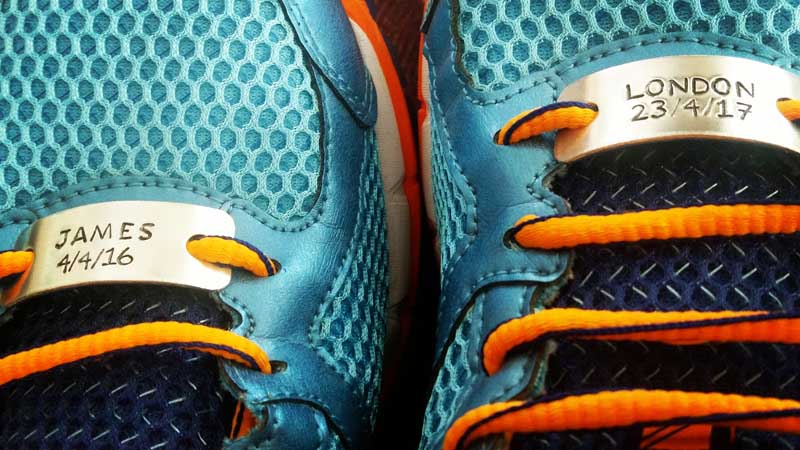 Somebody told me once that “Stars are always with us, even when we can’t see them they are still there.”

This sticks with me.

My son James is a star, not like the ones you find in Hollywood but the ones that burn brightly up above us.

Some may find this analogy strange especially as we are told that many of the stars we can see have actually already burnt out… well that is exactly the case with my James.

He may not be physically with me but he is still very much here with me. He is the fire that burns deep inside me, the inner desire pushing me to do good things in his memory, life changing things that not only impact positively on my life but also others.  He is the one that has led me on my current journey.

This time last year I should have been laughing about my bump growing at such a rate that my feet were no longer visible or how I had wedged myself between cars in the carpark because I misjudged how much space I actually required to squeeze through.

Instead I was in the deepest darkest throws of grief as I mourned the loss of my baby.

I had gone through the process of making sure my three older children were as ok as they could be with the loss of their youngest sibling.  We had been through the memorial service and yet inside I still felt no comfort.

I felt anger, rage even, that the universe could be so cruel as to surprise me with a pregnancy I hadn’t planned only to take it away after I had embraced the idea so fully.

Where was the fairness?

I had followed the rules and yet now my heart was in a million pieces and I had a scream in my chest I was unable to get out.

Some days it was so loud it prevented me from being able to catch my breath.  It exhausted me so much that all I wanted to do was curl up until I was with my baby once more but the universe was so cruel that anytime I allowed my eyes to close a little too long it played back his birth in vivid technicolour like a HD horror film.

I was here but I had stopped living.

Prior to James’ birth at 23+3 weeks the pregnancy had already caused a few health issues.  I still have kidneys that get quite cross with me even now.

It was a rough pregnancy most definitely but I had decided that I would do what was necessary to try to improve things where I could no matter what and that is how I got into running, well more a slow plodding more than running but let’s not split hairs here.

I had donned my trainers and stretchy running tights (every pregnant woman’s go to pants when comfort is all you require) and I got moving outside in the fresh air and bliss of the Welsh countryside with the intension of clearing the stress levels and dropping the blood pressure to a more user friendly level.

After mastering one mile without keeling over I felt so much pride that I increased my goals. Next I would tackle 5k.

During last year’s London Marathon sadly an army captain ran his last race and passed away just 5km from the finish line.  This was all the incentive I needed to complete my 5k journey.  Like many others I got out and ran 5km in his memory to complete his final task.  I myself am ex military so it felt like the right way to honour this gent.

After completing 5km came the brave idea that maybe, just maybe, I could tackle all the distances up to a marathon BEFORE my 40th birthday in 2017. Such a great idea.

I went in to labour at 23+3 and during labour my boy’s heart stopped, he couldn’t make it to the finish line and there was absolutely nothing I could do to help him.  No amount of tears or pleading brought him back.

This dark place I found myself wasn’t where I needed to be.  If I were no longer who would share my son’s name? But more importantly my children needed me and I had to find my way back for them.

Running once more was my answer.  I would run off that anger.

I would run as fast as I could as far as I could in the hope that the grief couldn’t catch up or ran out of puff before I did.

It was partially successful in that it allowed me to run till I was too exhausted to cry but I needed more than just exhaustion.

I needed to find a way to honour my son.

I needed to turn this around so that his memory wasn’t just a feeling of utter despair.  I needed his life to have a bigger purpose and that is how I find myself this Sunday donning a Tommy’s running vest covered in stars to run the marathon I had decided to run while he was still inside me. 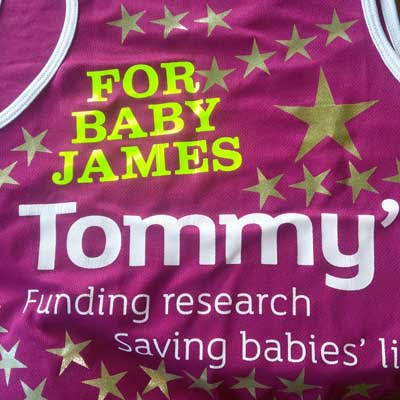 Each star on my vest represents an angel baby I have had the privilege of hearing about on my journey since losing James.

I had a deep dark fear that James would be forgotten.  He was born just short of the requirement for a legal birth certificate and so would never show up should future generations trace our family tree.

To others that may mean nothing but to me I want all FOUR of my children acknowledged.

That feeling of needing others to know about him, for others to say his name and for him not to just be swept into a cupboard where those “sad things that shouldn’t be discussed” go is what has brought me to where I am now.

Each of those stars are my way of acknowledging that each of these babies are important, they existed no matter how short a time they were with their families.

So many heart breaking stories but the joy that shows when I offer to add a star to my vest is so incredibly humbling.

I have given out my race number to those I could so that they can track their star to the finish line on Sunday.  I am happy to be able to do that for them.

Meanwhile my vest is so sparkly thanks to all those beautiful stars.

I guess that is quite representative of my life in general now.  The grief is still there but it becomes more bearable the more I share his story and allow others to share theirs.

For whatever reason I am meant to be on this particular journey. It is not the journey I would have chosen voluntarily but here I am.

One year on and I am no longer dead inside.  I have begun to heal through opening up to others and allowing them in return to open up to me.

I miss James so very much each and every day but we will ensure he will always be discussed openly and freely.  The children even chose a birthday cake to honour his first birthday at the start of this month.

I am no longer the person I once was and I never will be again but I hope that my gift to James is to make his purpose a positive one through becoming a better version of myself.

By throwing as much kindness out into the universe as I can muster and hopefully through my fundraising for Tommy’s help to prevent even one family from suffering the heartache we have as a family.

In the meantime though I will wear my angel star vest while I run in memory of all those babies who aren’t with us and hopefully bring awareness to Tommy’s in the process.

If you’ve been touched by Heidi’s story and want to support her you can make a donation to her fundraising page. Thank you in advance for your support!

We think Heidi’s story is incredibly inspiring. If you too have been inspired by what you have read and want to take on a challenge for Tommy’s, take a look at all of the different events you could take part in here.