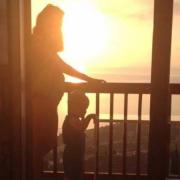 We are a small family of three; we were lucky enough to have a little boy 4.5 years ago without planning or complication. He was the most unexpected and joyful addition to our lives, and for a while we were thinking that when the time came for us to expand our family, it would be our decision to make and plan accordingly.

We started trying for a second baby once our son was 13 months old; in hindsight, we should have probably started before but it was simply not the right time for us, with me returning to work, my husband travelling on a weekly basis and having no family network around to support us.

It took us 15 long months of trying to conceive, a few basic fertility investigations and 6 months of weekly acupuncture to get us to where we thought was the beginning of the end. I was finally pregnant again but from the very beginning, something was not quite right.

I felt constantly unwell and every time I brought it up to a consultant or a midwife, they were ready to dismiss my fears as me being a tired pregnant mum to a toddler. All of our scans were showing our baby growing normally, yet we never saw our baby move once, in stark contrast to his older brother who was a feisty little creature in every scan I had with my first pregnancy.

I finally reached the point of 20 weeks and during the anomaly scan, we were shocked to be told that our little baby boy had stopped growing somewhere around the 17 week mark. The days that followed are probably the worst of my life, with our little boy being born silent the day after, at home.

We were shocked and broken and wanted answers that we never received; the post mortem showed nothing wrong with our baby boy, Herc, or me, and we were just told to try again. We put him to rest on the 1st of October 2014, his dad and I were the only people present during the short and tear-filled ceremony.

By that point, I was miraculously pregnant again straight away, as the need to have our much wanted second child was so overwhelming that it became an obsession.

I was being closely monitored this time around, due to the 20 week missed miscarriage. Everything was going well. Baby was growing, heartbeat was strong, and we were given the green light to travel for Christmas to my in laws in the US. I was just over 9 weeks with the third pregnancy by that point.

Sadly, we lost that baby 2 days before Christmas in 2015, the lowest point in my life.

This was followed by a rushed emergency D&C under general anaesthetic as I had been bleeding profusely for 2 days, which resulted in me nearly not waking up from the general anaesthetic. It turns out I had an enzyme deficiency which makes me very sensitive to a large spectrum of drugs used in general anaesthetic, something I was unaware of until that time.

We spent nearly 8 months doing extensive testing to get some answers, but came back with nothing concrete. We were then told to try again, as my age was starting to become a problem in terms of increased risk of chromosomal abnormalities and infertility.

We decided to give it one more go and got pregnant again last September; this pregnancy was again problematic from day one, with on/off bleeding and spotting, the baby growing at a much slower rate than normal. It was finally confirmed at the 9 week scan that it stopped growing again. Two painful ERPC's later we were left broken again, back to square one, with very little emotional and physical stamina to go on.

We had the support and sympathy of friends around us with our mutual families being away and not able to assist in any practical way. However the reality was everyone we knew by that point had already had their second children or were expecting them shortly.

This experience put a lot of our friendships and relationships with colleagues/family to the test, as everyone outside of our immediate circle of bereavement were not able to comprehend the profound impact of these losses in our family. They naturally assumed that because we had a healthy growing little boy, we had moved on and were able to put the miscarriages behind us.

The reality is that a mother can never overcome a baby's loss; she simply learns to live with it day in day out. This is where we still are at this point in time: learning to cope with the losses, the guilt of what we could have done differently to prevent our miscarriages, the mixed feelings as to whether we should not give up yet as we may regret it in the future, but not really knowing whether another attempt will be successful or whether I can mentally survive another pregnancy.

I turned 40 a few days ago and this has propelled us to decide to give it another go. We have had further private reproductive immunology testing done and feel that we may have a treatment plan in place which should hopefully help us achieve our dream of adding a much wanted second child to our family.

I have also been diagnosed with an under-active thyroid caused by an auto immune condition and will have to take medication for the rest of my life. I will never know whether this contributed to the losses (and could have easily been prevented by routine screening), or it came as a result to so many hormonal changes to my body in such a short period of time.

It has been 3 years and 3 months now since we started this journey and looking back, it feels like a lifetime away. The heartache and pain will never go away, however we are still hopeful that if we continue trying for something that we are so badly longing for, we may get there in the end.