It was too early to really confirm anything so they asked us to come back in 10 days. I was in complete shock, I didn’t know it was possible to have a miscarriage without knowing.

Deep down I knew I hadn’t got my dates wrong, that this baby should be measuring 12 weeks but I took their one piece of hope and clung to it, I just couldn’t acknowledge the alternative.

I had lost a baby some years before but it was early, and  I’d accepted that it wasn’t the right time for us, it wasn’t meant to be.

This time we’d gotten as far as our scan, we’d started planning and preparing, everything was perfect….and then it wasn’t.The second scan still couldn’t give us a definite answer, there was no heartbeat and just one sac, but it had grown, which meant another week of waiting, although they had gently explained that, with no heartbeat, it was highly unlikely I was carrying a living child.

The wait was absolute hell and, as suspected, a third scan revealed it was not a viable pregnancy and I was given the option of waiting to miscarry naturally or having a D&C. I chose the latter because waiting to miscarry meant waiting longer to start trying again and that’s all I wanted to do.

Everywhere I looked there were people with babies.

Everywhere I looked there were people with babies, usually one baby and I couldn’t stop thinking how exciting it would have been to be having two. Trying for a baby became my life, I researched every book, every website.

By February 2007 I was pregnant again but I was fuelled by nerves, not joy.

I felt physically sick sitting in the waiting room for an eight week scan. There was no heartbeat and the baby measured six weeks but again, they couldn’t confirm. A week later it was definitive, no baby, so I booked in for my second D&C. I remember waking up feeling groggy and confused and asking my husband where my baby was, he didn’t know what to say.

Very soon after, I got pregnant again but one Saturday, at 8 weeks, I called my husband and said I didn’t feel pregnant anymore, the nausea and sore breasts had just gone. I went to A&E and they referred me for a scan but I’d started bleeding and cramping before my appointment. At that scan the sonographer was so cold and impersonal. She suggested I’d never been pregnant. I told her I was sure and she replied, ‘Well you’re not pregnant now’.

I’ve seen some amazing medical professionals but I think sometimes it’s easy for them to forget that, what is commonplace for them, is one individual’s tragedy.

I couldn’t understand it, I was eating healthily, not drinking, I didn’t smoke. It just seemed so unfair.

When I saw pregnant women they looked so smug, of course they weren’t, it’s just that everything in the world had become about me not having a baby.

As two of the miscarriages hadn’t been confirmed, I wasn’t classed as having three in a row and wasn’t eligible for tests. It was so frustrating, I wanted answers, a solution so we could fix it, so we wouldn’t have to go through this anymore.

By September I was pregnant again.

Ironically, I’d decided not to try for a month, it had all become too much, and it was then that I conceived.

I had an early scan at seven weeks and there was a tiny heartbeat, my husband cried but I was in shock, I just daren’t believe. We had a holiday to America booked and the date for my 12 week scan came through, it was the day before we were due to fly and I knew that we’d have to cancel if the news was bad.Everything was fine, we got our scan pictures and I started feeling excited and to fully enjoy my pregnancy.

Emily arrived in June after a horrific birth. She had shoulder dystocia, her head came out but her shoulders didn’t follow. Too late for a C-section, they had to manipulate my tummy and literally pull her from me. She was grey, floppy and not breathing so they rushed her away to resuscitate her and, thankfully, within minutes she was fine.

Everything felt so surreal. I was exhausted and overwhelmed and we had to stay in hospital for 48 hours so they could check her shoulders were okay. It was in the following weeks I realised I had post natal depression. I’d idealised motherhood because I’d wanted it for so long and the reality, the sleeplessness and tears, came as a shock. I got great support and, with counselling and antidepressants, I was through the worst by the time Emily was six month and fully enjoying motherhood.

By February 2010 I was pregnant again. Because I’d had Emily, I wasn’t considered high risk so I booked for a private 10 week scan which eased my fears. At 18 weeks, on a holiday in the Lake District, I just felt wrong. I had no symptoms, just a tiny speck of blood, but I insisted we drove an hour to the nearest hospital.

I had no symptoms, just a tiny speck of blood, but I insisted we drove an hour to the nearest hospital. 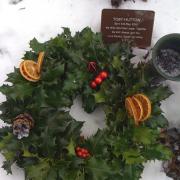 Lancaster Royal Infirmary was fantastic and took me seriously, despite the lack of symptoms. They used an ancient scanner on the ward because the scanning department was closed, and it showed neither heartbeat nor movement.

Because the machine was so old I had to come back the next day and that second scan confirmed our baby was gone. I screamed and cried, I couldn’t believe it was happening.

They explained that, this far into the pregnancy, I would have to give birth and I was wanted to do it at my local hospi

When we had said our goodbyes, they  placed him in a basket and took photographs for us. They asked if we wanted them to bring him back to spend some more time with him but I said no, I knew if they brought him back to me I’d never let him go.tal, so we travelled home to Guildford and, after being induced, Toby was born.

The next three months I was completely wrapped up in grief and completely lost.

We had a funeral and buried Toby’s ashes in a children’s memorial garden. A post mortem on our little boy revealed a chromosomal abnormality in my placenta had caused Toby to be starved of iron.

They assured me the chances of the same thing happening again were just 1% higher than if it had never happened so we started trying again and, by August 2010, I was pregnant. At 16 weeks we discovered we were having a son and at 37 weeks Joshua arrived, he was perfect.

Each miscarriage I had was heart-breaking and losing Toby left me crushed.

I’m chief executive of Count for Kicks, having started as a volunteer, because I understand the pain of losing a child. That’s why we, like Tommy’s, must continue to work hard to raise awareness, in the hope of sparing other women that terrible pain.