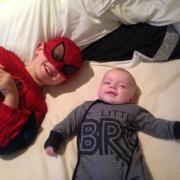 Currently my six-year-old is at school, and my almost five-month-old is in my arms. I had a missed miscarriage at 6 weeks, prior to having my first son. I knew fairly early on, as I went to A&E with what I thought was an ectopic pregnancy, but it turned out to be a cyst on my left ovary. I was told that the pregnancy was most likely unviable, and after a horrible two week wait I was told that I had miscarried.

I had to have medical management, as my body wasn't getting rid of the foetus. Fast forward 18 months later, and after having an operation to remove my cyst, I then had my first son with no problems.

18 months later I had a natural miscarriage at 7 weeks, ironically the day before Mother's Day

Although I was upset, I told myself that I had had to endure a miscarriage before my first son was born, so if that's what had to happen, so be it. I then got pregnant again straight away. I had a scan and saw a heartbeat at 8 weeks.

Following this, I had lots of pains and was told at my next scan that I had had another missed miscarriage at 8 weeks, which was around the time of my scan. This was the worst time for me, physically and mentally. I had to have 6-7 weeks off work, as I wasn't in a good way.

I decided that I couldn't try again without knowing that there was nothing wrong with me, as that was my third miscarriage. The NHS wouldn't test me because I hadn't had three miscarriages in a row, but luckily my mother-in-law, at the time paid for tests. Other than an underactive thyroid, nothing was wrong.

I then became pregnant again, and remember saying to a friend that I knew I was going to miscarry at 9 weeks, as my miscarriages were at 6 weeks, then 7 and 8. At exactly 9 weeks I was walking in a car park at a local supermarket, when I doubled over in pain. A scan the next day confirmed that I had miscarried at 9 weeks. Another missed miscarriage and another medical management.

I had some time out from trying and, then my husband (now ex) told me he didn't want another child

I was devastated and couldn't carry on with the marriage, so we divorced.

I started selling my baby items, and in some way it was a relief that it was all over. I then met another partner who wanted a baby. I had two chemical pregnancies with him, and then in December 2014 I found out I was pregnant. This was a pregnancy that stuck and I had my beautiful and long awaited second son.

I have no idea what worked, perhaps it was a new partner. My treatment plan had been progesterone till 14 weeks, high dose folic acid till 12 weeks, lots of scans, and a fabulous consultant who answered my anxious emails at night.

Friends who have miscarried have said that they don't know how I did it. All I can say is that I never lost hope, had lots of courage and am a very determined person, who doesn't like being beaten. I also didn't want my son to be an only child, and I'm glad I carried on as he adores his little brother.