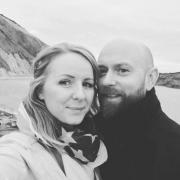 So there it was the words that changed our world and made us complete ... our first IVF attempt had been a success! A couple of weeks passed, and it was time for our 6-week scan. We sat and waited our turn feeling both terrified and excited. When we finally went in, there right on the screen in front of us was our tiny little baby with a very visible heartbeat, our whole world inside me. Our baby was due 9th August 2016 and we were over the moon. On Christmas Eve, I had a small bleed -nothing major, but went to A&E just in case. After a few tests and a scan we were told all was fine and sent on our way. A total relief!

Everything was going well, until one morning I woke up with an overwhelming feeling of something not being quite right, but couldn't put my finger on it. I only had a few spots of blood, but just felt so strange, I knew something wasn't right. I decided to go back to A&E to get checked again.

A few tests later was told all was fine, but their scanning machine wouldn't work and they couldn't fit me back in for 3 days! We decided we couldn't wait and booked a private one for later that day. That afternoon was when I felt my heartbreak. There again on the screen was my perfect baby but this time, no heartbeat.

I can't even begin to describe how we both felt. Our whole world came crashing down around us. The weeks to follow were awful I had another scan which showed our baby was still there, so it was time to make the decision one we never thought we would have to make.

We opted to have a procedure so awfully named: "evacuation of products of conception"

I know it's a medical term but it really hurt me. My baby was not a ‘product of conception’,  my baby was a longed for child that I had gone through months of injections and taking drugs to conceive and  get my body ready to keep him or her safe for 9 months. As if it wasn't bad enough that I felt my body had let me down, everyone was referring to my baby as a product!

While at the hospital making this decision I was already bleeding and in such excruciating pain, I was being physically sick. Unfortunately, the lady we were speaking too couldn't have cared less.

I ended up rushing to the bathroom and that's where I think I passed my baby. My husband called someone to help who said "we can dig around in the toilet, but there's not much point".  I think we were both in so much shock that we couldn't say anything apart from “oh ok”. She made us feel as if we were being ridiculous.

I was sent home still bleeding and being sick with my husband who was terrified seeing me in the state I was. No one explains what will happen or told us just how bad the pain will be. It’s terrifying to just be left at home not knowing if what's happening to you is what should happen.

Finally I had a scan to check if I still needed the procedure and as there were still “some remaining product ", I would have to go ahead with the procedure.

We decided to try again but unfortunately the next attempt was a failed cycle. We are going to have a month off and try to get our heads around what's happened over the last few months since our first IVF in October, then will hopefully try again.

I'm shocked about the lack of care when it comes to something so important I haven't heard a single word from a single professional to see if I'm coping ok, which if I'm honest, I'm probably not. In fact, I’m coping at all.

I'm so thankful to have found Tommy's, they really are amazing and it helps so much to read others’ stories and understand that you are not alone, and the heartache you feel for your baby is totally justified.

Thank you Tommy's for making this taboo subject something people can finally talk about.