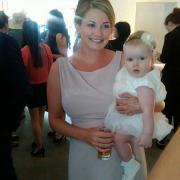 At the end of November 2015, we experienced a miscarriage. I was just under 6 weeks pregnant. Then, in January, we experienced an ovarian ectopic pregnancy, again we found out at around 6 weeks. I have chosen to share our story in the hope that it reassures other women or couples in similar situations that they are not alone, and a problem shared is a problem halved, in my eyes. Reading through the experiences of other women on Tommy's Facebook page has helped me immensely, so I feel like sharing my story would be giving back to those who shared theirs.

We had been trying for our second child for only a few months when I found out I was pregnant in November, but from the moment I had that positive test, I knew something wasn't right. But there was no reason to believe this until around 5 and a half weeks when I started spotting. After attending the Early Pregnancy Unit at Southmead Hospital and having an internal ultrasound, it was confirmed that I had experienced a miscarriage. I
had to return twice more within a week for blood tests to ensure my body was passing everything naturally, which it did.

My partner and I were devastated. It was only early, but we had the rest of our lives pictured with our little family already. We had talked about sorting out the third bedroom.  We had told close family members and a couple of friends. I had even gone as far to mention a few baby names! Our little bubble of happiness had burst, with a huge pop.

Over the next few weeks we focused on preparing for our little girl, Hollie's, first Christmas. Then to our surprise on New Years’ Eve two pink lines popped up on a pregnancy test. My period was only a day or so late so I was only just over 4 weeks pregnant (dating from the first day of bleeding from the miscarriage). However almost immediately, I began spotting. The doctor advised that the Early Pregnancy Clinic would not see me until I was 6 weeks. So we waited. The spotting was very intermittent, would turn into very light bleeding usually in the afternoons or evenings and would sometimes be brown, sometimes bright red, sometimes dark red.  I continued to take pregnancy tests during this time, every other day or so. The lines were getting darker and the digitals confirmed 'pregnant', so although I was wary due to the spotting and bleeding, I felt slightly reassured.

Finally after what seemed like forever, but was actually just 10 days, I got a referral form.   The first ultrasound was inconclusive as they couldn't see any pregnancy tissue but the HCG in my blood was at the 'right' level, so I had to return in two days for a repeat blood test. A phone call later that afternoon confirmed the bad news - the HCG had dropped so a probable second miscarriage, something which apparently is not all that uncommon. I didn't get upset, I felt like it was inevitable that this would be the result. We could never have been that lucky. Ironically, I also started bleeding more heavily later that day, a similar flow to the previous miscarriage.

I had started to develop a strange pain in my lower left abdomen.  I couldn't describe it - it was a cross between wind, ovulation pain, and a stitch

After mentioning this to the midwife, she advised to monitor the pain, and call back immediately should it worsen. I was to return again in another 48 hours for more blood tests.

Two more visits and sets of tests later, the pain had gotten worse. The midwife on the forth visit decided they would require another ultrasound scan, then and there. A few minutes later, I am being told that they suspect I have an ovarian ectopic pregnancy and I was to go down to the ward immediately to be assessed by the consultant and surgeon. The afternoon was full of waiting for results and talking to doctors and nurses, after which the consultant concluded that they were going to take a 'watch and wait' approach, as it looked like the ectopic was resolving itself. Again, I was told to return in 2 days for further tests.

My fifth visit was the most eventful - another scan and they could now see a larger mass on my ovary and bleeding around it. The next couple of hours were a whirlwind - I was told by every midwife, nurse and doctor that I would be going down for surgery that afternoon, with the likelihood of my ovary being removed. A cannula was put into my arm, I was allocated a bed and told to wait for the surgeon to see me.

My partner arrived at the hospital, perfectly calm as always; as was I, surprisingly at that point. There was so much to take in that we had no choice but to be very matter-of-fact about the whole situation. The surgeon visited not long after, and said as I was so young he was very reluctant to do the surgery, coupled with the fact that he personally thought my body would still do the job of removing the ectopic itself. He advised that I would need to stay in hospital to be monitored until my next set of tests in 2 days’ time.

I was discharged 2 days later after more tests confirmed the ectopic was no longer bleeding, and my HCG levels had at last halved. Two more hospital visits over a week finally gave us the good news that the ectopic had completely gone, I was just left with a cyst which was shrinking.

Reflecting on everything now, I do feel sad as I grieve for the losses. But I also feel lucky as things could have been a whole lot worse. At the time, I felt very removed from the situation as if it was all happening to someone else, or that the doctors were making it all up. Ultimately, I just felt completely out of control.

Studies vary but approximately 1 in 15,000 to 1 in 27,000 ectopic pregnancies are located in the ovaries. To put that in perspective, the most common type of ectopic, located in the fallopian tubes, occur in around 1 in 70 pregnancies.

Family and friends were extremely supportive the whole way through both losses, though most didn't know what to say. There are the usual sayings of, 'it wasn't meant to be", "at least you have Hollie", "there's plenty of time" etc. All of which I get, and are completely and utterly true but were hard to swallow at times. Sometimes a simple hug did more than any words could.

For now I am just happy to be healthy and I feel better physically and mentally as each day passes. I put a huge amount of pressure on myself during the periods of trying for our firstborn, Hollie (who we were lucky enough to conceive after 8 months of trying, with no issues) and prior to the miscarriage in November - I was desperate to be pregnant. I have promised myself that there will be no more pressure, and perhaps then we will be lucky enough to have our rainbow baby.