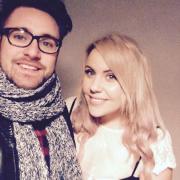 It sounds crazy, but I just knew. We bought a two tests that evening (quite lucky as I messed the first one up!). So I took the test and jumped in the shower. It was positive, and I felt elated. I ran into the bedroom to tell Sam, who was ecstatic. I thought I was going to burst into tears. Good luck has not come easily over the past few years. From losing my dad to his battle with cancer, to then having to face another battle with cancer and my mum; thankfully she pulled though.

I travelled to work that day feeling amazing. Smiling at myself and picturing me and Sam becoming parents. We spent the next few weeks in a happy bubble. We bought little outfits, teddies, and researched all the vitamins and foods that I could eat.

It felt like a lifetime to reach our 12-week-scan. So we decided to book an early 10 week private scan. As I lay down, and the sonographer started, I could see there was something wrong. She asked me how far gone I thought we were, and if I could have been mistaken. Tears started to roll down my face. Sam squeezed my hand and told me it was ok. I agreed to an internal scan as the sonographer said we could get a better picture of what was happening. As I left the room to compose myself. Sam followed and I broke down. The first words I said were: "If there's anything wrong then it's my fault", I had been working 70, nearly 80 hours the previous weeks and pushed myself hard. Sam reassured me, but the guilt had hit me along with the feeling that our world was falling apart.

The scan was inconclusive, but the size of my little bump was measuring a lot smaller than it should have for 10 weeks. The clinic advised a follow up scan the week after, to check on progress and to see what to do next. We left for home feeling completely numb.

The week that followed was an agonising wait. I remained positive, we researched lots of cases of mistaken dates, inconclusive scans, and compared them to our situation; scrutinising everything to try and believe it was all one big misunderstanding.

The second scan came, different sonographer, but the same concerned look as I lay there being scanned. She confirmed the measurements were not right, however she could see two embryos... twins

This was a ray of hope for us. I thought surely everything is ok, as they couldn't detect twins the week before. Despite this new discovery, the sonographer was still concerned. She advised I be referred to the EPU to be assessed.

Within two days I was waiting in my local EPU unit for further tests. The sonographer told me to take the notes, and the scan photos with me so they could review them also.

I sat and waited to be called for my scan. That was an extremely difficult day. Seated in the antenatal clinic with lots of expectant mothers with baby bumps. As I was called for my scan I was nervous and emotional. Unfortunately I was not met with a compassionate sonographer. I tried to show him the notes and the photos. Desperately trying to hold onto the glimmer of hope we'd been given. He bluntly told me, he wasn't interested in whatever was seen before, he was only going to go by what he saw that day. I felt crushed, I wanted him to at least acknowledge what had been found already. He started to scan me with a cold expression, then told me, 'it didn't look good' and that 'my womb looked raggedy'. I faced another internal scan where I began to feel helpless and alone. He told me that they may want to do blood tests, but that 'he didn't see the point'.

I had to wait for a doctor to explain the situation. At this point it wasn't looking great. I was told they needed to do a blood test to get a bench mark of my hormone levels. They would then re-test me in two days time. I went home feeling crushed; Sam and I both felt helpless. Then I picked myself up. I had hope that the little bumps inside me were fighting just as much as I was to stay with me. I took my vitamins, stuck to the healthy diet and put on a brave face.

The blood test confirmed it was twins. Two days, after on Christmas Eve, (my 12 week date) I had more blood tests. Christmas came and went in a blur of emotion, it felt so wrong to be celebrating when we were in such turmoil. The hormone levels had dropped, but they wanted to scan me again. I felt the dread run through me.

Thankfully I was met by an amazing sonographer, she was compassionate and understanding. The scan yet again confirmed things were not good, however the sac had grown. I was told this was common as my body and hormones still thought I was pregnant. I was experiencing some light bleeding for the past few days. As I waited for the doctor back on the EPU unit. I felt sad, but not the complete devastation of the last scan as they had seen a change of some sort. I tried to keep positive. The doctor told me he was 98% sure this was a failing twin pregnancy. He felt doing more blood tests would only cause me more discomfort and false hope. So instead, I was advised to go home and let nature take its course. I was booked back in to discuss management options, if nothing had happened.

Those two weeks were agonising for us both. Trying to carry on as normal, working and putting on a brave face. I returned to be told they wanted to scan me again, another internal to see exactly what was happening. I was then told yet again bad news. I was becoming numb to the whole process. Wishing to be anywhere, but here being told the same agonising truth over and over again.

The doctor explained the options I had to manage my miscarriage. I wasn't ready to make a decision straight away, and I was told I could call them in the morning. We decided that we wanted medication to help me. Originally I hadn't wanted to go down that road. I wanted to let nature take its course. But I was struggling mentally with the anguish, grief and endless hospital visits. We needed closure, to allow us to grieve properly.

By this point I had stopped bleeding, this caused problems. The doctor wanted to do another blood test to confirm a significant drop in my hormone levels.

After preparing myself to face having to take the medication. I had to wait yet another sleepless night. The next day, it was confirmed that my bloods had again dropped. The doctor gave her consent, and I took the four little tablets. I then had to wait in the room along with many other patients for an hour so they could observe me. I was sent home with a leaflet, strong painkillers and two types of antibiotics. I felt empty, scared, guilty and incredibly heartbroken.

The pain was bearable but uncomfortable, the hospital rang me a few days later and asked me how I was. I believed at this point I had miscarried, they wanted me to come back I'm for a follow up scan. I was upset.... I didn't want to go through anymore scans.

As I lay there, the sonographer broke the news that I had not miscarried. I burst into tears

Back on the EPU unit, a doctor organised for me to be admitted into the ward, to take the medical management under supervision as the sac was now to big for me to safely miscarry on my own at home. I endured 12 hours of medication and in the early hours February 7, 56 days after my first scan (at nearly 18 weeks), I miscarried our babies. The pain was excruciating, but nothing compared to how I felt inside.

It's been a heartbreaking nightmare. A long process of blood tests, scans, doctors and hospitals. I've been incredibly lucky to have such amazing support from Sam, my mum, and close friends and family.

I still feel guilty, I still cry at random times. I feel empty and incomplete. All the hopes, dreams, and plans we made with our little bumps has been taken away from us. But with time although we will never forget, I know we will be ok again.