I realised I was in labour and cried ‘No, it’s too soon,’ and actually crossed my legs to try and stop it happening.

Everything was going so well and, at our 20 week scan, we were so excited to discover we were having a baby boy.

Just two weeks later I didn’t feel right, there was a pressure in my pelvic area when I went to the toilet that hadn’t been there before.

At hospital they took blood and urine tests and did an external examination before sending me home, reassuring me I’d just got a low lying cervix. I felt so silly, getting all worked up for nothing.

On the Sunday night I woke at midnight and the sheets were damp but I wasn’t worried and decided to wait and mention it when I called on Tuesday for test results.

By then I’d started to have mild cramps too so they told me to come in but, still, I wasn’t concerned.

But after an internal exam the midwife said she needed a consultant and I knew something wasn’t right. The panic increased as they told me I was 4cm dilated, in early labour.

I was shocked, angry and confused. How could I be in labour without knowing?

They explained there was a problem with my cervix and admitted me. The following hours were a whirlwind of tests. Nobody could tell me anything and I was desperate. In a room just off the delivery suite, I could hear women giving birth all around me.

A few hours later my results came back and the consultant explained I had an infection and I’d gone into labour at 23 weeks. He told me that if my baby arrived before 24 weeks, he wouldn’t be strong enough to make it. At this point, he says, your baby ‘is not viable’. I felt such rage. ‘Don’t use that word to describe my son’.

He told me I could have a stitch put in to close my cervix but there’s a high chance it would rupture my waters. I just couldn’t take the risk, so they put me on bed rest and all that was left was to hope and pray we made it to 24 weeks.

Two days later they scanned me again and my baby was fine but the following day the infection and cramps got worse and worse. I remember waking up at midnight shaking and dripping wet. I could see the panic in Mum’s face as she called for a midwife. The rest is a blur as seven people ran into the room. My temperature was so high my body went into shock. Within an hour I was stable but, it was then I realised I was in labour. I cried ‘No, it’s too soon,’ and actually crossed my legs to try and stop it happening. At first I refused to push but then the morphine kicked in and I couldn’t fight it.

He was never alive outside of me, heart-breaking but, in a way, a relief that he didn’t suffer. I know that if I’d heard him cry and been unable to help him it would have killed me.

I had thought I wouldn’t even be able to look at him but after giving birth I needed to hold him. I’d expected something gruesome but he was a beautiful, very tiny baby. His skin was a little transparent but he had perfectly formed lips, tiny eyelashes and massive feet. I fell asleep with him on my chest.
I kept him with me for the whole day, in an especially ice-cooled Moses basket. I know that’s hard for some people to understand, but I wanted that precious day with my son.

We named him Mikey, after my father, and the whole family came to meet him.

They discharged me the next day but I got them to take Mikey first, I couldn’t have walked away and left him behind.
We had a funeral. I wanted recognition that he’d been here and the chance to say goodbye. His dad, Dan, and I drew around our hands, cut them out and wrote messages so we could ‘hold’ him in his coffin.

He has a plaque in the baby garden at the crematorium and Dan and I have his ashes between us. Our relationship didn’t survive Mikey’s death, it tore us apart.
Giving birth before 24 weeks meant I wasn’t entitled to maternity pay and the company I worked for wouldn’t give me more than one week of paid leave because, they said, it wasn’t ‘exceptional circumstances’. In the end I left and got a new job.

My son was born three days before that 24 week milestone and never took a breath outside of the womb so I couldn’t get a birth and death certificate. I know there have to be rules but losing a child is such an emotional, personal experience. It can’t be reduced to ticking a box.

When I lost Mikey I was given a leaflet, but it didn’t help much. I went online to do my own research and that’s when I found Tommy’s. There was so much information and reading about other women’s experiences was a huge comfort.

People don’t really understand what a late miscarriage means, what it involves, that’s why raising awareness is so important.

There’s such a stigma, people don’t want to talk about the fact a baby has died, but when it’s your baby you want to speak out.

There really needs to be better after care for women like me, particularly when it comes to giving women a sense of what they can do to remember their lost child.

I’m lucky, I have a wonderful family. My beautiful niece was born in January but my Mum always says it’s her second grandchild, Mikey was her first.
On his first birthday we gathered to let balloons go, our way of remembering him, and we have a special bauble for him on the Christmas tree.

I think about him every single day. That will never change. 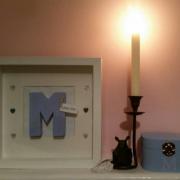