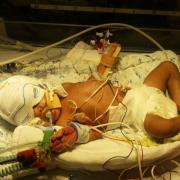 7th April 2015 was an exciting day for me and my husband which ended in a heartbreak. I went for my first ultrasound scan looking forward to seeing my baby, only to be told my baby's heartbeat had stopped. I just thought maybe they're not checking properly, I refused to believe it. A doctor was called into the room, and double checked and confirmed my baby had died. My heart sank. I had no symptoms, this is what they called a 'missed miscarriage'. A few days later, I had to have surgery to remove the baby. This was a heartbreaking time for me but with the right support, I had faith things will get better.

A month later I got pregnant and felt so blessed yet worried. I had a smooth pregnancy and enjoyed every moment of it. But in the last few weeks, I felt something was not right but my midwife assured me everything was fine.

I was 2 weeks overdue, I went into labour and got told my baby's heartbeat drops every time I have a contraction. So they decided to burst my waters, after doing this the doctor realised I had no amniotic fluid, so god knows how my baby was surviving. They did an emergency C-section and my baby had swallowed a lot of meconium.

She was in NICU on a ventilator, we were not sure if she would pull through. I went to her bedside everyday and spoke to her and just prayed for her to pull through.

With the hard work of NICU staff she was able to breath by herself after 4 days! The most stressful and worrying days were over. She is my miracle baby and a true fighter.

I never knew about Tommy's until the baby sensory class I attend made me aware of it. Now my miracle is getting sponsored for a superhero theme to raise money for this great cause.