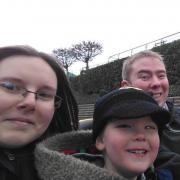 When we found out we were pregnant for the first time pretty much as soon as we started trying we couldn't have been happier, we had the perfect pregnancy until at 33 weeks and 6 days my waters broke and our son, Thomas, was born on the bathroom floor in January 2012 without any paramedics (they did arrive shortly after) and although he spent 2 weeks in the hospital was always happy and healthy. They never gave us a reason for his premature birth so we knew it could be a factor in any other pregnancies, or not, it was just a matter of wait and see.

Once Thomas reached a year old we decide to try for baby number two, expecting much the same as the first time round, how wrong we were. We got pregnant the second time relatively easily, but at 11 weeks I had some minor spotting, which got progressively worse over a few days and I knew something wasn't right, it didn’t feel normal for me given my previous pregnancy. A few days later we had a scan which confirmed our worst fears; the baby had stopped developing at 7 weeks. It was absolutely devastating, we couldn't hide away and cry, even though we might have wanted too because we had a little boy who needed us to keep going and be normal. I had a medical miscarriage at home a short time later.

I continued working and being a mum, stopping would have meant I would have had to admit to everyone what had happened. And the guilt and my pride wouldn't let me.

After that it almost became my mission to get pregnant again to replace the baby we'd lost. It took 7 months, and as the pregnancy progressed well, we really believed the last one was a fluke, like so many people had told us, “It’s just one of those things”. My belly was growing and all seemed well, until the 12 week scan, where they could see the placenta but no baby, and nothing like they should have seen at 12 weeks. We were totally surprised, because there had been no pain or bleeding and everything seemed to be going in the right direction. It began to feel like maybe something was actually wrong, once could be a fluke but twice seemed like something more serious.

I had a medical miscarriage, but at a different hospital to the first which meant staying in for the day. My pregnancy tissue was taken away to be assessed and when the results came back they confirmed it was a molar pregnancy.The aftermath of this pregnancy was awful, blood and urine samples taken at the hospital every other week, with Thomas in tow, for about 5 months until my hormone levels returned to normal. The bleeding lasted so much longer than the first time. Not only did it mean I was physically uncomfortable, and fielding the constant questions of “when are you having another one then…” but it felt like a massive blow as we couldn’t start trying again whilst we were waiting for my hormones to do their thing, and also there could have been much more serious health implications for me going forward.

My veins began to collapse from the constant pressure of blood being taken from my arms, and when my hormone levels finally reached normal. I found out I was pregnant again.

This time totally unplanned and not meant to happen, I decided that maybe it was meant to be and that this baby would survive, just because there was no planning, no stress and no expectation. I had an early scan at 5 weeks to confirm the pregnancy and another at 7 weeks.

Unfortunately there was no change or growth in that 2 week period and so we once again had to make the awful decision to have another medical miscarriage at the hospital. After being through it twice we were able to cope with this a lot more, there were fewer tears, because there had been less expectation and hope. You learn to believe it will go wrong and that it won’t work out, partly as a shield to protect yourself and your family - Thomas was only 3 at this point - and partly to ease the pain if it does go wrong. It was so hard knowing that Thomas may never get a sibling, I’m an only child and had always said I didn’t want my child to be alone in that way, so I was adamant I would try for as long as I could tolerate to give him the sibling I think he deserves.

After the 3 miscarriages, I was referred to a consultant at the hospital. She had bloods run, and nothing abnormal was found. I then had an internal scan, and they found something on one side of my womb which looked like it could be some retained pregnancy material which was causing some inflammation (and possibly causing the miscarriages). The consultant advised me to wait and have a hysteropothy to see what this was and possibly have it removed, which would hopefully lead to a successful pregnancy the next time.

Whilst waiting for the procedure, we found out I was pregnant again, knowing they had found something wrong we went to a 7 week scan ready for bad news, and knowing there was a solution in sight if this pregnancy ended in miscarriage too. However, at the 7 week scan all was fine, baby, heartbeat, sack, everything exactly where it should be. The nurses in the EPU asked me to come back in 2 weeks just to put my mind at rest, so I did, and at 9 weeks there was good growth, and everything still as expected. We were so shocked, and although we are taking nothing for granted in this pregnancy we are currently 31 weeks pregnant with our long awaited little girl.