I knew that things could go wrong but I never thought that it would happen to me, until it did.

We were so overjoyed to discover I was expecting in early 2011, I was supposedly a no-risk mother and everything had been absolutely fine so, when I noticed I was bleeding a bit, I went to the Chelsea and Westminster hospital for a check-up but I wasn’t really that worried.

Then my waters suddenly broke and I went into labour there and then. Jack was on born on August 30 2011 by emergency caesarean section at 27 weeks. He was tiny and beautiful. For the first 12 hours it looked as if he might be okay but then he started to deteriorate. Our little boy was in intensive care for three days but he was just too sick to survive.

Those few days with Jack were both wonderful and heart-breaking 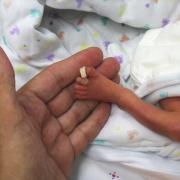 Those few days with Jack were both wonderful and heart-breaking. It was so tough but I’m so grateful to have had the opportunity to spend that time with him. I will never forget him, I never want to, and I feel very lucky to have had that short, precious time with him.

Losing my son is the worst experience of my life. I’ve been told since that my placenta was failing but I don’t have a clear idea as to why. I don’t know why our son died. My partner Brenton and I have no answers as to why we suffered this terrible loss and we struggle with not knowing.

I asked to be referred to the Tommy's clinic

I really wanted to get pregnant again and just seven months after Jack’s death, I was expecting Gracie. I have no complaints about the care I received when I was expecting Jack but this time I made sure I had done lots of research and I asked my GP to refer me to Tommy’s. I’d read about their pre-term clinic and I just knew that, for me, it was the place where I’d feel safest.

Being pregnant again was a huge mixture of emotions, I was delighted but really anxious. More than anything I was just desperately worried that history could repeat itself and the idea of losing another child terrified me.

I had my first appointment at Tommy’s nine weeks into my pregnancy. I called them because I was bleeding, it was a tiny speck but Professor Shennan, the head of the clinic, told me to come in straight away. They carried out checks and, thankfully, everything was okay. From that point I was seen at the clinic up until the 27th week of my pregnancy. I had appointments every three weeks, fetal fibronectin tests and regular scans.

Throughout, the staff at Tommy’s were really reassuring. Just knowing I would be there every few weeks made me feel safer.

Gracie was a planned caesarean section. I couldn’t face a natural delivery after Jack, I just wanted my baby out safely as soon as possible. She arrived at almost 38 weeks. My waters broke and, after a seven-hour labour, I had a C-section and Gracie was here. The relief was overwhelming and we immediately fell in love with our little girl.

Although I enjoyed moments of carrying Gracie it was nothing like the first time, until we lost Jack. I’m pregnant again now, due next month, and this pregnancy has been much like the last, filled with anxiety.
We decided to find out whether we were having a boy or a girl, just to get our heads around who would be coming into our lives. I’m expecting a boy, which I think has made me even more nervous, but, again, I’ve been under the care of Tommy’s from the twelfth week of my pregnancy and they have made me feel as reassured, comfortable and safe as I possibly can until I have my baby in my arms.

I sometimes think it’s harder for Brenton. I can feel our baby kicking and moving but he can’t. He’s so anxious and desperate to see his son, safe and healthy. I’m booked in for a caesarean section again because I just don’t want to take any risks with my little boy.

Having Gracie means the absolute world to us. It’s not that you love a child more for having lost another, it’s just that you, perhaps, appreciate it differently, you appreciate just how lucky you are and take nothing for granted.

At Tommy’s I’ve been under the care of Professor Shennan throughout my second and third pregnancy. He is so caring, understanding and he never makes you feel like any question you ask is silly. I can’t emphasise enough what his support has meant to me. All of the staff at Tommy’s are fantastic, so understanding and caring to every mum-to-be who walks through their door.

After losing Jack, being pregnant hasn’t been easy. One day you’re confident and exited but the next the doubts creep in and you worry the baby isn’t moving. Before you know it you’re feeling neurotic.

It’s been really hard but I know I would have struggled so much more without Tommy’s and the reassurance they’ve provided.

I still can’t allow myself to get excited. I haven’t had a baby shower and I’ve barely bought a thing for our new arrival, but Tommy’s has made both of my pregnancies more bearable, they’ve given me the strength and support to cope and that’s why the amazing work they do is so hugely important to mums like me.