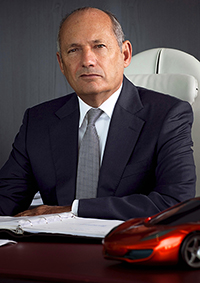 Ron Dennis is the former Chairman and CEO of McLaren Technology Group, and the former Chairman of McLaren Automotive. He has been a pioneering force within motorsport, measured by the 158 Grand Prix wins and 17 World Championship triumphs that McLaren has achieved under his control, he is the most successful team chief in the history of Formula 1 racing. Dennis’s innovative approach to business, combined with his entrepreneurial courage, enabled McLaren to grow and diversify significantly. Alongside McLaren Automotive, which manufactures some of the most advanced and highly rated high-performance sports cars in the world today, the group also now encompasses McLaren Applied Technologies, which offers high-tech solutions for clients operating both inside and outside the motorsport and automotive arenas. McLaren’s activities range from producing the innovative hybrid ultra-high-performance sports car, the McLaren P1™; to providing technical support to assist Team GB athletes win 15 gold medals at the 2012 Olympic Games; to working in partnership with GSK to improve the efficiency of that company’s medication trials and production processes.

Alongside Sally Tennant, Ron Dennis was Co-Chair of our trustee board for 15 years before becoming a Patron in April 2016. 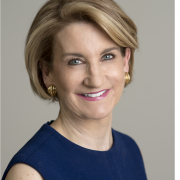 Sally Tennant is the founder of Acorn Capital Advisers, an independent wealth adviser. She  has many years of investment, banking and management experience. She is Chair of Style  Analytics, the portfolio analytics company, a Director of Waypoint Capital, and a Director of  Canaccord Genuity.

From 2011 to 2014 Sally was CEO of Kleinwort Benson. She was previously Chief Executive  of Lombard Odier (UK) Ltd and Chief Executive of Schroders Private Banking. Sally is a  patron of Tommy’s the Baby Charity and a trustee of Guy’s & St Thomas’s Charity. She holds a degree in Politics from the University of Durham.

Joe Chambers qualified as a chartered accountant but has worked in investment banking for 20 years. He is a Senior Managing Director of Evercore and was previously a partner at Lexicon Partners. He is married with three children.

Director of Research and Economics at the Health Foundation

Before joining the Health Foundation in May 2014, Anita was Chief Economist at the Nuffield Trust for four years where she led the Trust’s work on health care financing and market mechanisms.

Anita was Chief Analyst and Chief Scientific Advisor at the Department of Culture, Media and Sport from 2007 to 2010 and, prior to this, she was Director of Public Spending at the Treasury from 1998-2007, where she led the team working with Sir Derek Wanless on his reform of NHS funding in 2002.

Anita has a Masters in Health Economics from York University and has worked as an Economic Advisor in the Department of Health and for SmithKline Beecham pharmaceuticals in the UK and USA. Anita is Vice-Chair of the Whittington Hospital NHS Trust.

Sonji Clarke is a consultant obstetrician and deputy head of the London School of Obstetrics and Gynaecology, and an honorary senior lecturer at King’s College London. She has been a consultant for more than 10 years with special interests in perinatal mental health, substance misuse, and women who are pregnant with other complex social factors. She also has a special interest in Postgraduate and Undergraduate education, as well as an interest in multi-professional diverse leadership development.

Sonji is a Fellow of the Royal College of Obstetrics and Gynaecology and the Higher Education Academy and has a Masters in Academic Practice. In 2018, she was honoured as one of the Top 70 NHS Women Leaders in London during the NHS 70 year celebrations by the London Women’s Leadership Network and was named as one of the top 50 BAME NHS leaders by HSJ in 2020.

Aedamar Comiskey was elected as Senior Partner at global law firm Linklaters LLP from 1st July 2021 for a 5 year term. Aedamar was formerly the firm’s Global Head of Corporate; she joined the firm as a trainee in London in 1992 and was elected partner in 2001.  She was recently recognised by Financial News as one of the 20 Most Influential in Legal Services 2021, is an active sponsor of the Linklaters’ Women’s Leadership Programme and is included in City A.M’s Power 100 Women List.

Anna trained in medicine and qualified from St Andrew’s University, Scotland in 1989 with an Intercalated BSc in Medical Science and from Manchester University in 1992 was awarded MB ChB.

Anna did specialty training in obstetrics and gynaecology in London (NW Thames London Deanery) and completed a PhD on “Development of ultrasound guided gene therapy in the sheep fetus” in 2005, and then undertook subspecialty training in maternal fetal medicine at UCL with Professor Charles Rodeck as supervisor, becoming a consultant in 2008.

Anna was awarded an NIHR Clinical Senior Lectureship in Women’s Health in 2008, was promoted to Reader in 2012 and Professor in 2016.

Prior to this, David was Chief Financial Officer of F&C Asset Management plc, and instrumental in the company’s acquisition by BMO Financial Group, and subsequent integration into BMO Global Asset Management (EMEA). Before becoming CFO of F&C in July 2006, David spent 17 years in the accounting profession, including four years as a partner at Deloitte & Touche LLP and three years as a partner at Andersen.

He holds a BA in Accounting and Economics and is a member of the Institute of Chartered Accountants in Scotland.

After beginning her career in M&A at Chase Manhattan and JP Morgan, Kate joined McKinsey where she leads the Consumer Digital work in Europe, the Middle East, and Africa.

Robert Stirling is a partner in the corporate department at Skadden, Arps, Slate, Meagher & Flom LLP, where he focuses on transactions for insurers and asset management clients, as well as working on the regulatory issues involved in transactional work and the insurance sector generally. He advises on public and private acquisitions, private equity investments, portfolio and other risk transfers, share offerings and asset disposals.

Rob is married, with three sons, who he tries to keep up with.

Shema qualified in Medicine from Newcastle University in 1999.  She has Masters in both Medical Anthropology and Epidemiology, and a PhD in Public Health.  She is a former Fulbright Scholar and has held MRC, NIHR and Wellcome Trust fellowships. Shema’s research focuses on women living with HIV, and she has specific expertise in HIV and pregnancy, and patient and public involvement in research.

Following the loss of her son Altair in pregnancy, Shema received care from a Tommy’s research centre and now has two young children.

Hayley has worked in retail all her working life, in luxury goods in airport retailing and then over 20 years with Tesco. Hayley worked her way up - from the checkouts to the boardroom and established herself in both Senior HR and Retail Operations Leadership roles.

In August 2011 Hayley joined Asda, where she is responsible for developing and leading the HR strategy, supporting 170,000 colleagues. Hayley lives in Buckinghamshire, with her husband and two children. She also enjoys family holidays, gardening and personal fitness.

Trudi is a Hedge Fund Specialist Consultant at Cambridge Associates where she also started her career after graduating from Durham University. She has also worked for Partners Advisers SA and Morgan Stanley. Trudi is married with three children.

Find out more about our people