Following the tragic stillbirth of their son Joshua in 2014, Adam and Hayley Powsney decided to go to St Mary's Hospital in Manchester, where they met Tommy's Dr Alex Heazell and his team at the Rainbow clinic. Adam says that the care they received helped them lay their 'demons to rest'.

They had their beautiful rainbow baby Edie in 2015 and have recently welcomed their newest arrival, George Joshua Powsney.

I couldn’t wait to be a dad, it was my dream. I lost my own father when I was 22 and I just wanted to do what he’d done, to be as good a dad as he was.

We started trying in May 2013 and by August we were pregnant and over the moon.

Hayley suffered repeated water infections so we had a reassurance scan at nine weeks and I was so happy I actually gave the sonographer a hug. We told Hayley’s parents and my mum and they were so excited to be expecting their first grandchild.

I got an app that tracks your baby’s progress as it grows from the size of a peanut, to an olive and beyond. As a dad-to-be you don’t feel the kicks, so the app and the scans meant so much…it was my contact with our baby.

Our 12 week scan was fine, then, after our 20 week scan, he started kicking and it was lovely, it made it feel so much more real. I got to work on the nursery, it was what I could do for our little one.

Then Hayley’s waters broke early at 33.5 weeks at 5am. We raced straight to the hospital where the consultant told us our baby was in breech position and his head was engaged. He said we’d have to have a c-section.

We were both scared. Hayley kept saying ‘it’s too early’. I felt sick but tried to stay calm.

A shift change meant a new consultant and, without any further assessments, she told Hayley a vaginal delivery would be less risky.

We had just minutes to decide and, tragically, we took the consultant’s advice. Had we made a different decision our son would still be alive.

Watching Hayley in pain made me feel so helpless but, eventually, the consultant returned with over a dozen trainee doctors, one of whom delivered our son Joshua Jeffrey at 12.24.

There was no cry from our baby

He came out bottom first, his legs kicking but, by the time he was fully delivered, there was no movement, no cry.

They tried to resuscitate him for 40 minutes. I held Hayley’s hand so tight and whispered, ‘Don’t look’ as I prayed to my dad, to anyone else I could think of.

They handed him to us and he was beautiful. Chubby cheeks, a pouty mouth and my curly hair. We both held him for an age in the delivery room, then went to another room where we dressed him and spent the day together.

I remember walking down the corridor to meet the three expectant grandparents. In seconds they went from the highest of highs to a crushing low as I sobbed, shook my head and told them Joshua had passed away.

I was angry, hurt and frustrated

Afterwards Hayley’s dad and my best friend, a solicitor, met with the consultant and asked if a c-section would mean our son would still be alive. She said he would.

We now know the consultant stopped monitoring Joshua’s heart rate for 24 minutes and he suffocated to death. We know that they put the wrong IV line in to resuscitate him. We’re not doctors so we put our trust in the medical professionals and it was tragically misplaced.

The hardest thing for us is that they gave us a choice. Hayley felt her decision to deliver naturally had killed her son.

Our loss affected us differently. Hayley didn’t want to leave the house or see anyone but I couldn’t stay indoors. I was so angry, hurt and frustrated.

All I wanted to do was protect my wife and son, and I’d not been able to.

We weren’t offered any counselling and had no communication from the hospital beyond a letter to my solicitor friend saying they accepted no responsibility for Joshua’s death. This fuelled our anger and spurred us to take a legal route. They’ve since admitted some liability for our loss.

We were desperate to be parents

Given we knew we’d had a perfectly healthy son, and were both desperate to be parents, we started trying again in April 2014 and by June we were pregnant again. We were thrilled and not unduly worried about the pregnancy. We knew the delivery would be the greatest source of anxiety and fear.

We needed to plan and our first decision was choosing St Mary’s Hospital. We didn’t learn about the Rainbow Clinic until our first appointment where we met Professor Alexander Heazell, possibly the best thing that ever happened for us.

I feel emotional just thinking about everything he did for us, his kindness and total understanding of what we’d suffered and how we felt.

We had regular scans and saw him every month from 16 to 33 weeks, then every two weeks after that. He could see our anxiety building as our due date approached and offered to deliver our baby himself.

He did everything to make sure we were OK

He held our hands throughout the process and did everything possible to make us comfortable.

Our planned c-section was booked in for February, three days before the year anniversary of Joshua’s death, Dr Heazell didn’t want us in hospital for that, again that was so considerate.

Telling our parents she’d arrived was incredible. We all cried and it was like we were putting demons to rest.

Nothing will ever replace our son. We took his handprints and footprints which we had made into jewellery which we both wear every day, but Edie’s arrival gave us our first real sense of joy and peace since we’d lost Joshua.

Tommy’s and the Rainbow Clinic are so vital for families like us. The level of care is incredible and they do everything in their power to support and reassure you.

They literally got us through one of the toughest times of our lives.

If you are interested in the work of our Manchester Centre and Rainbow clinic, you can read more about the team and their work here.

Since Andy told his story, he and wife Hayley have welcomed Baby George, also born via planned c-section, performed by Professor Heazell. 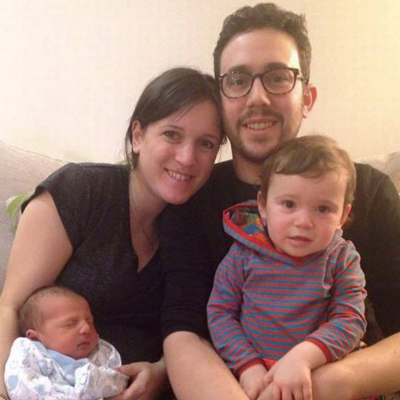