Twelve weeks into her pregnancy, mum Millie Smith was told that one of her twin girls had a fatal condition called anencephaly, and that there was no chance of survival. On 30 April this year, Millie gave birth prematurely to babies Skye and Callie at Kingston hospital. Baby Skye sadly died a few hours later.

Baby Callie is now 8 weeks old and thriving. It was Millie’s experience in the neonatal ward following the loss of baby Skye that prompted her to launch an initiative that helps identify mothers who have suffered baby loss, while they are still in hospital. 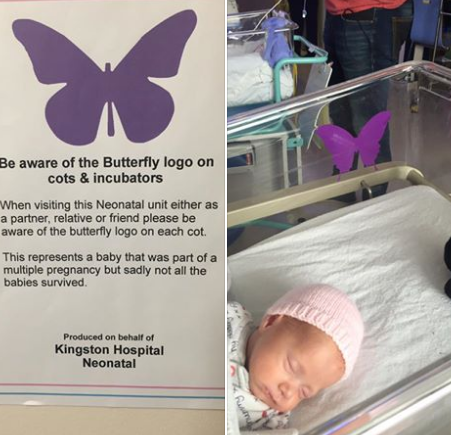 "I was in a neonatal ward with Callie, and there were three sets of twins crying," she says.

"A parent who didn't know what I'd been through turned to me and said, 'You are so lucky you don't have twins.'

"When she said this to me, it just broke me.

"I know the mother would have felt bad if she knew how her words affected me."

It was then that Millie came up with the idea of creating ‘Butterfly Logos’, purple butterfly stickers that go on to the cots, to indicate the loss of a sibling.

"I felt there should be something like a small symbol to let people know that my baby had died.”

Millie’s first Facebook post about the Butterfly logos went viral and the scheme has already been successfully adopted by Millie and her fiance Lewis’s local hospital. The pair now hope to get the butterflies into hospitals nationwide.

Millie and Laurence have also founded the ‘Skye High Foundation’ to raise money and provide support for grieving parents.

Millie and Lewis’s main aim is to get people talking about baby loss. Their story is an inspiration to grieving parents and her butterfly stickers provide a beautiful solution to a sensitive issue that is often overlooked.

Read about our premature birth research