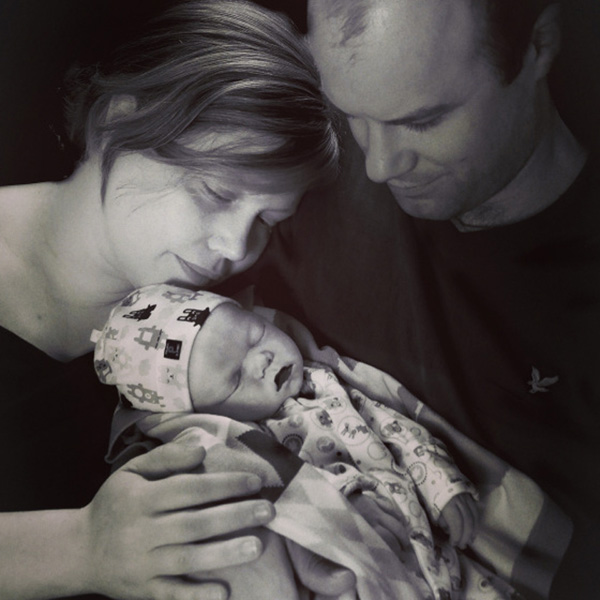 Stillbirth is one of the most devastating experiences any family can go through and leaves a pain that only those who have endured can really understand.

It took Lucy 6 months to finish writing her story, but she said she found writing Jude’s story played a large part in her healing process.

Both of Lucy’s daughters were both born late, so she and her husband, Ross, were not too concerned when her labour hadn’t started at 10 days over her due date.

‘I went in for a routine post-date scan, 11 days over, and was told that everything was looking normal, baby was happy, fluid levels were good and was sent home to return either in labour or for induction in 3 days time (as per hospital policy).’

The next night Lucy’s waters broke and she and Ross drove to hospital. Once there, Lucy was scanned but her midwife was struggling to find a heartbeat.

‘Although she wasn’t saying much when she went to fetch another midwife I began to worry. When 2 midwives were unsuccessful I realised something was terribly wrong.’

Lucy and Ross then had to wait for a registrar to come out of an emergency section before they were able to find out more.

‘Those 20 minutes wait were perhaps the longest of my life. My husband kept reassuring me but I knew deep down that this wasn’t normal and was preparing myself for the worst. When the midwives returned and asked us to come to a private room, that’s when I knew we’d lost our baby.’

The doctor performed another scan and confirmed that, sadly, there was no heartbeat.

‘It’s impossible to describe how I felt in that moment. I remember my husband, Ross, asking lots of questions and I don’t think I spoke for quite some time. The hours that followed are somewhat of a blur because in the dead of night none of it feels real. There were tears, questions, kind reassurances from the night staff and mostly just being held by my husband.’

The next morning Lucy’s midwife from the community midwives scheme arrived to support her and her husband through the birth.

‘I couldn’t have been more relieved to see her face. Kate had delivered our eldest daughter and the familiarity was something we really needed. Kate really was a gift sent from above, not just for the labour ahead but the days that followed…Kate explained to us that often in situations like these the body will try and resist labour and so it could be at least 24 hours before I would deliver the baby and that often delivering a stillborn can be difficult. They asked if I’d like to go home and wait to see what would happen or if I stayed in the hospital, after a few hours if things hadn’t progressed I could opt for an oxytocin drip to move things along. There was a lot of information to process and part of me wanted the decision to be taken out of my hands. Being asked what you want to do and I just wanted to shout I don’t know, I don’t want to do any of this. I felt an enormous burden to try and work out what to do in the midst of feeling so utterly devastated. Kate was incredibly helpful at taking time to sit with us, listen to us and give us space to work it all out.’

Lucy opted to stay in the hospital and see if she would go into labour naturally.

‘My contractions were still only about 15 minutes apart and not lasting very long, at this point you are totally torn because you just want to get it over with but equally you know that once it’s over you have to face the reality that you don’t have your baby anymore. The idea of delaying labour and keeping him or her inside me for a little bit longer meant we had a little bit more time before I had to say goodbye.’

In the end Lucy decided to try for a natural labour and, shortly after showering and dressing, she found her contractions were coming closer together and growing in intensity.

‘It’s amazing how nature kicks in, despite the devastating outcome, my body knew it had one job to do, to deliver a baby and even though I knew that this wasn’t one of those – ‘the pain will be worth it moments’ – I wanted my baby’s entry into the world to be one that was calm and peaceful, perhaps because this was the last thing I would be able to do for him as his mum.’

Within 2 hours Lucy was ready to start pushing and shortly afterwards she gave birth to her beautiful baby boy, Jude, weighing 8lb 3oz.

‘Kate had warned us about the strange silence that would follow delivery and as she placed his little body beside me – he looked so peaceful, as though he were just asleep and in that moment our hearts were both overwhelmed with love and completely and utterly broken.  We named him Jude – which means praise/thanksgiving – because despite our loss we are so thankful for our little boy.’

6 weeks after giving birth to Jude, Lucy and Ross received the results of his post-mortem which revealed Jude had an acute group B strep infection.

‘I hadn’t been screened for group B strep. We were told at that appointment that it isn’t considered ‘cost effective’ to screen mothers but since losing Jude I really believe that information and awareness on Group B strep is totally lacking in maternity services.’

At Tommy’s we work with The Group B Strep Support Group to raise awareness and provide more information on this potentially serious illness in newborns.

You can read the CEO of Group B Strep Support Jane Plumb’s blog about this illness on the Tommy’s website here.

Jane founded Group B Strep Support charity her middle child Theo died from group B strep infection, just hours after his birth in 1996.

It is now two and half years on from Jude’s birth, and Lucy and Ross have gone on to have a daughter who is now 11 months old.

‘We miss Jude every single day, I don’t think I’ll ever understand why it happened, but this is Jude’s story and I’ve realised that telling it is part of our healing.’

If you have suffered a stillbirth and need support, you can read our information on stillbirth here.

If you ever need to talk to someone about what you’ve been through, our midwives are trained in bereavement support and available at our free pregnancy information line - 0800 0147 800, open every weekday 9 until 5.

Read more information about support after a stillbirth