Heidi appeared on Loose Women and the 30th Anniversary Edition of Hello! (out now) to talk about why she’s lending her support to the Sensathon, running in Baby Sensory and Toddler Sense classes across the country from 19 May.

‘I was born 6 weeks early, and because I was so tiny, I was in an incubator for weeks.  So, when I had six weeks to go, I had my hospital bag packed, just in case. I became obsessed with going for scans. Each time was nerve-wracking waiting to hear the heartbeat.  In just wanted to have a little look at her and check that everything was OK.’ Heidi

On top of her experiences of premature birth, she had friends who have miscarried.

‘1 in 4 women  go through it and often don’t know why, which is awful. I took Aurelia to Tommy’s National Centre for Miscarriage Research. Modern medicine is helping keep these babies alive and give women answers as to why their miscarriages may have happened. When awful things happen, mums go into fight mode. They don’t really think about themselves, it’s all about the baby. I feel so lucky to have a healthy baby and so lucky I can do my bit to help others too.’

Heidi took part on a special Gatsby themed dress up shoot with Aurelia, with bubbles and balloons galore, to celebrate the Sensathon! 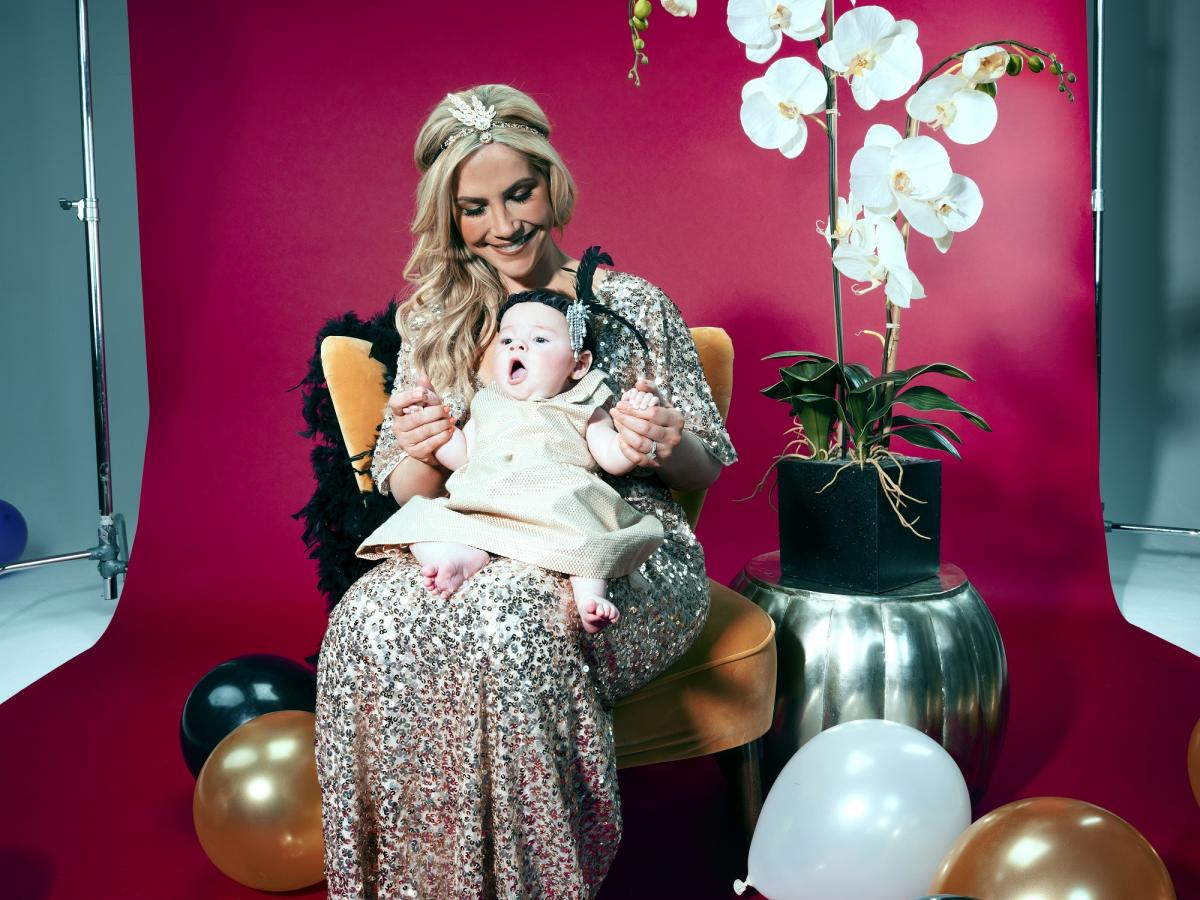 ‘This year’s theme is Showtime so we’ve loved dressing up.  It’s a great idea to get babies to raise money and save other babies’ lives. They are sponsored to complete challenges like popping bubbles. Aurelia loves the sensory classes, especially the lights and puppets.  It has been such fun playing with her and other mums’ 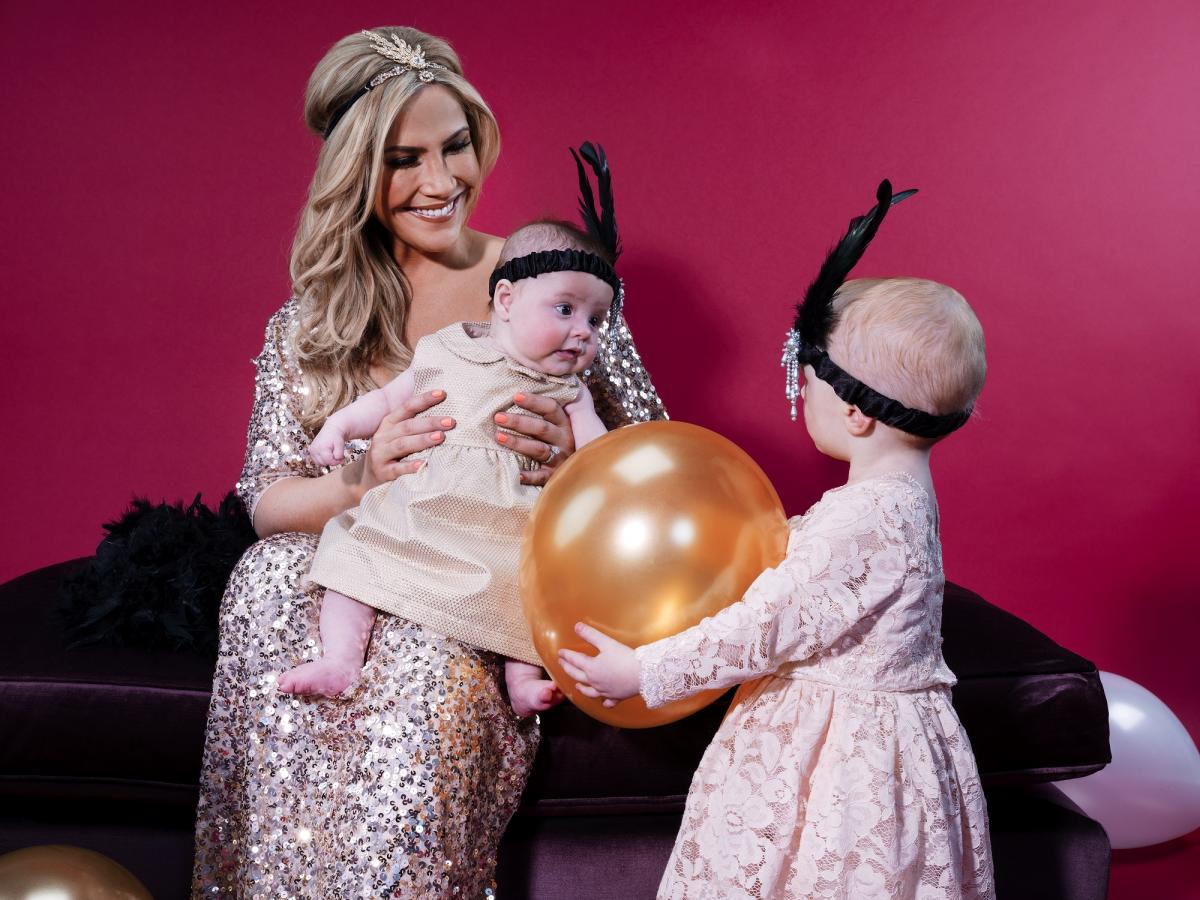 Gill, Edie’s mum, explains how they became involved in Tommy’s;

‘I’d had a tricky pregnancy in that I felt quite unwell for the majority of it and I can’t say I took to pregnancy in the way my pals did – I didn’t really have a bump and I felt run down and just not myself. I had committed to a fair bit of foreign travel with work in the early weeks of pregnancy and had to hide a fair amount of sickness (being sick into the snow in Berlin was a particularly low point!)  I’m sure, on reflection, my colleagues knew something was up.

At 28 weeks my partner Chris and I were on a ‘babymoon’ to the Lake District and I became aware of feeling swollen and suffering dreadful heartburn. We put this down to it being a particularly hot weekend but looking back at photos from the weekend, you can see that something was wrong. My hands, feet and face were badly swollen, and my energy levels were low.

Fate played a part in the events that followed as it just so happened that I had a routine midwife appointment on the day we returned. My partner and I attended the session full of positivity and had a lovely catch up with our terrific midwife, Ellen.

On taking my blood pressure, the tone in the room changed and we were advised not to panic but to head to Stoke Mandeville hospital immediately as my blood pressure had spiked to a dangerous level (180 systolic pressure). I remember Ellen being so calm and in control and Chris and I didn’t panic, we just took ourselves to hospital, as directed.

The doctor advised I have a cautionary cannula fitted, in the event of intervention being required. I recall the registrar did mention the words ‘in case we need to deliver’ which at 28 weeks was scary but at no point did we feel alarmed as the level of care was exceptional.

After spending one night on the labour ward, I was discharged to return to day clinic in 3 days’ time. On our return 3 days later, this then started the chain of events which led to Edie’s birth. I wasn’t great – I was still puffy, still felt dreadful and I’ll never forget what the midwife said to me ‘you’re not pukka Gillian’ and how right she was. The next three weeks were spent from the hospital (which was the safest place for me to be) and started to feel like I was going to have a preterm baby so this is where Tommy’s really started supporting us.

We wandered back to the ward feeling like things had come to a head but that we should relax and wait for further guidance. We can’t have been back in the ward for more than 10 minutes when the midwife said ‘actually, we are going to deliver today’ as apparently the NICU had space for a small baby so it would be a good time to deliver.

Six hours later, we were in surgery and it all went beautifully with an incredible team supporting us. The moment we heard Edie cry, as if by magic, my all-time favourite song started playing, ‘The winner takes it all’ by Abba (though it was slightly overtaken by my partner’s tears!).

My partner was asked if he’d like to cut the cord, to which he replied ‘No, as I’ll only mess it up!’. Our surgeon explained that Edie had been born in her sack (and was therefore extra special) and it was the first time for our surgeon.

We’d also been informed that Edie’s placenta was in very poor condition and had intervention not happened when it did, we could have (very easily) had a different outcome.

Edie then spent 28 days in hospital. 28 wonderful (yet nerve wracking) days getting to know our little girl, understanding the equipment and learning how to be parents from the fantastic nurses and learn about the whys and how our little girl had been in such great need to meet us sooner than expected.

Tommy’s research page was also a wonderful support to us during this period as we wanted to understand more about the medical reasons for prematurity and we were shocked to learn the high number of prem pregnancies (as it’s a subject we didn’t have any knowledge of) as none or our friends and family had experienced it.

Edie is now almost 2, has (just about) caught up with her pals in size and is absolutely flourishing. We couldn't be more complimentary of all medical professionals who supported us and the wonderful team at Tommy's who kept us feeling positive and well informed throughout. We can't thank you enough.’

Thank you to Heidi, Chris and Gill – and thank YOU to all of the wonderful babies and their parents raising money for our vital research during this year’s Sensathon! 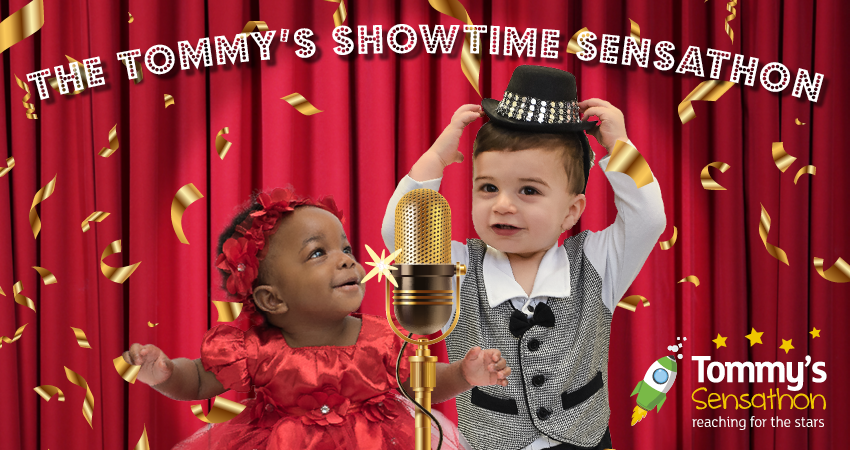 Babies and toddlers are sponsored to complete up to 6 challenges at our Showtime extravaganza during May 2018. For many children this will be their first ever sponsored event, so pretty special in its own right.

Why should you take part?

Sensathon is a fun and happy experience for all involved. But there’s an important reason behind it too. Every year, 1 in 4 women lose a baby during pregnancy or birth. Baby Sensory and Toddler Sense are committed to supporting Tommy’s in reducing this unacceptable statistic that devastates families up and down the country. So every mum, dad and child taking part will be helping babies who aren't as lucky. And every pound raised, will help to save babies’ lives. The money raised from Sensathon could enable 26,500 couples to attend a Tommy’s Research Centre and help them realise their dream of having a baby.